Roberto Martínez to remain in charge of Belgium until 2022 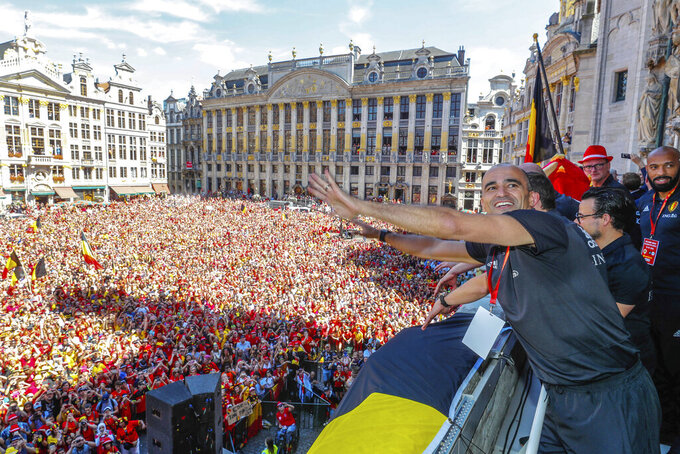 FILE - In this Sunday, July 15, 2018, photo, Belgian soccer team coach Roberto Martinez reacts on the balcony of the city hall at the Grand Place in Brussels. Martinez has signed a new contract to lead the Red Devils through the 2022 World Cup in Qatar. (Yves Herman, Pool Photo via AP, File)

BRUSSELS (AP) — Belgium coach Roberto Martínez has signed a new contract to lead the Red Devils through the 2022 World Cup in Qatar.

The Belgian federation said on Wednesday that the 46-year-old Martínez, who previously coached Premier League teams Everton and Wigan, will also continue in his role as technical director for the federation for two more years.

“The corona crisis has slowed things down somewhat, but the contract extension has been completed and is now official," the federation said.

“This will allow Roberto Martínez to continue his work, lay the foundations for the future of Belgian football and train the person who will succeed him as technical director after the 2022 World Cup."

Martínez, who is a former player from Spain, began his coaching career in 2007. He took over Belgium in 2016 as a replacement for Marc Wilmots, who was sacked after the national team was eliminated from that year's European Championship in the quarterfinals.

In charge of a brilliant generation of players, including the likes of Eden Hazard, Thibaut Courtois, Romelu Lukaku and Kevin De Bruyne, Martínez guided Belgium to a semifinal finish at the 2018 World Cup.

“The next two and a half years will be particularly intense for our national team with the Euro, the Nations League, the qualifying matches for the 2022 World Cup and this final tournament," Martínez said.

Belgium currently tops the FIFA rankings ahead of World Cup holders France and Brazil. It qualified for the 2020 European championships with a perfect record of 10 wins, living up to its billing as the world’s top-ranked national team by scoring a qualifying-best 40 goals and conceding just three.

Belgium was among the favorites of the continental tournament before it was postponed until next year because of the coronavirus pandemic,

“With the Nations League League, the European Championship and the 2022 World Cup, it will probably be the most important years in our football history," said Peter Bossaert, the federation CEO.

“We wanted to do everything we could so that our team could start this cycle in optimal conditions. With Roberto, we keep not only a top coach, a true gentleman, but also the ideal ambassador for Belgian football."