Robinhood accused of downplaying the risks of trading 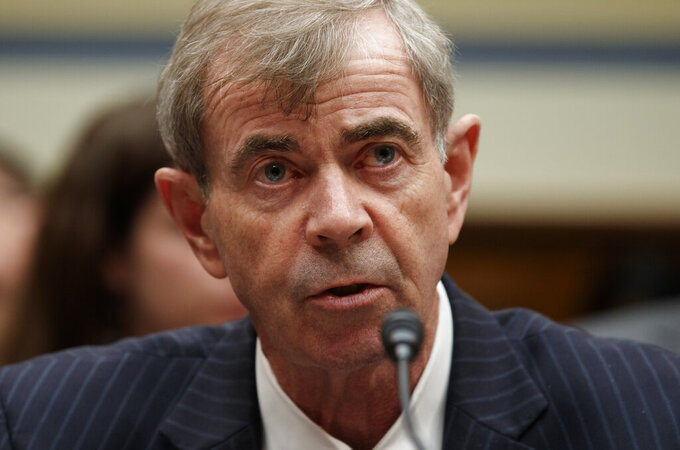 FILE - Massachusetts Secretary of the Commonwealth Bill Galvin testifies on Capitol Hill in Washington, Wednesday, May 22, 2019. Regulators in Massachusetts claim Robinhood Financial targets and manipulates inexperienced investors and has failed to prevent costly outages on its popular stock trading platform. In an administrative complaint filed Wednesday, Dec. 16, 2020 by Galvin, the state alleges that Robinhood violated securities laws by aggressively marketing itself to Massachusetts investors “without regard for the best interest of its customers," while also failing to maintain a properly working platform as its number of users exploded. (AP Photo/Carolyn Kaster, file)

In an administrative complaint filed Wednesday by Secretary of the Commonwealth William Galvin, the state alleges that Robinhood violated securities laws by aggressively marketing itself to Massachusetts investors “without regard for the best interest of its customers," while also failing to maintain a properly working platform as its number of users exploded.

The complaint seeks an unspecified fine against Robinhood and an order requiring the company to hire an outside consultant to review its platform, infrastructure, and policies and procedures, among other penalties. Robinhood has nearly half a million customers in Massachusetts with accounts valued at more than $1.6 billion, according to the complaint.

In a statement, the Menlo Park, California-based company said it disagrees with the complaint and intends to mount a vigorous defense.

Galvin takes aim at how Robinhood does business, claiming the company uses "gamification strategies," such as showering a user's screen with virtual confetti every time they make a trade, to lure young people with little or no investment experience to trade stocks. The median age of a Robinhood customer is 31 and roughly 68% of the company’s customers in Massachusetts report having little or no trading experience, the state said.

Galvin also asserts that the company, which earns revenue for trades executed by its customers, allows users to make a potentially unlimited number of trades without properly screening them to be approved for making certain types of riskier trades.

“As a broker-dealer, Robinhood has a duty to protect its customers and their money,” Galvin said in a statement. “Treating this like a game and luring young and inexperienced customers to make more and more trades is not only unethical, but also falls far short of the standards we require in Massachusetts.”

In its statement, Robinhood said it is “a self-directed broker-dealer and we do not make investment recommendations.”

The state also claims the company’s infrastructure has failed to keep up with its growing customer base, resulting in frequent outages and disruptions that prevent investors from accessing their accounts. The company has experienced approximately 70 outages since the beginning of the year, including critical days for investors when the stock market has either surged or plunged, Galvin’s office said.

The company said it has been working over the past several months to improve the platform's performance and has added “safeguards and enhanced educational materials” about investing for its customers.

Robinhood has drawn criticism and regulatory scrutiny in its drive to bring more regular people into investing, not just wealthy investors already well versed in the markets.

A year ago, the Financial Industry Regulatory Authority fined Robinhood $1.25 million after accusing it of not doing everything it should to find the best prices for customers trading stocks. Robinhood neither admitted nor denied the allegations in the settlement.

Outside of the regulatory scrutiny, critics say Robinhood may be offering too much of a good thing. By making trading stocks and exchange-traded funds so cheap, easy and maybe even fun, it could be enabling unsophisticated investors to buy and sell too-risky investments too often.

The company tells customers on its website that they can “level up with options trading,” for example. With options, investors buy a contract that gives them the possibility of buying or selling a stock or ETF in the future at a set price. Trading options allows for potentially big profits at a low initial cost, but it can also be riskier than buying a plain vanilla share of stock if the bet goes the wrong way. And if traders borrow money to juice their options trades, it raises the risk even more.

The conventional wisdom is that holding onto investments for the long term often proves to be the better play than trading often and trying to time the market. Consider this year, where the pandemic forced the market to go through years’ worth of action in the span of just a few months.

All that volatility was lucrative for short-term investors who played it the right way. But anyone who simply held onto an S&P 500 index fund eventually got made whole after the market returned to record heights. The S&P 500 has recovered from every one of its setbacks in history, after being given enough time.

Investors on Robinhood and other trading platforms have also influenced prices on Wall Street. Analysts credit these investors with helping drive shares in Tesla and other Big Tech companies sharply higher last summer while the economy struggled.

Researchers have attributed some of Robinhood’s growth this year to people having a lot more time on their hands after coronavirus-caused lockdowns closed down the economy this past spring. The shutdown of sports leagues around the world also left many gamblers looking for something else to bet on.