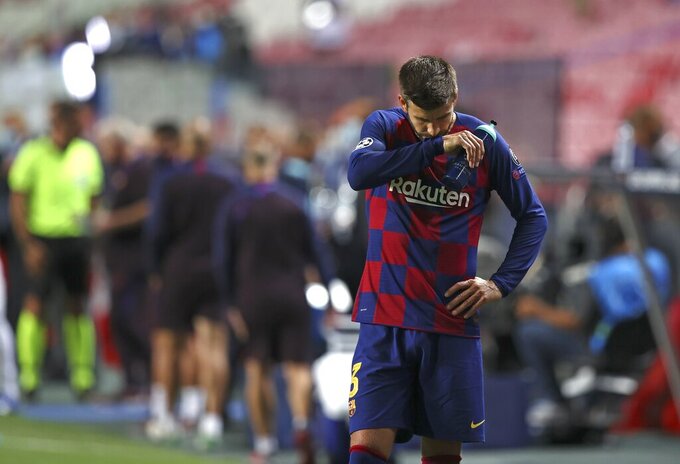 BARCELONA, Spain (AP) — Lionel Messi had warned Barcelona’s fans that his team didn’t have enough to win the Champions League this season.

But not even the most pessimistic supporter could have imagined the depths to which Barcelona could sink.

The Spanish club was battered beyond recognition during Friday's 8-2 defeat to Bayern Munich in the quarterfinals of the Champions League, arguably the most devastating loss in the history of the 120-year-old club.

“When I was watching the game the only thing I was thinking of is my wish for the agony to end,¨ Barcelona fan André Alemany said. “And that we will see a big number of heads roll as a consequence of the result.”

Unless the club can quickly contain the crisis, the debacle threatens to bring an end to the winning era that made Barcelona one of the top clubs in the world.

This is the first season that Barcelona has finished without a title since 2008, after which Pep Guardiola unlocked the very best of Messi and ignited a winning streak that made it one of the most feared opponents in Europe for more than a decade.

Messi had publicly criticized his team after it lost the Spanish league title to Real Madrid last month. He called his team “weak” and said that “playing like this we have no chance of winning the Champions League.”

Bayern made Barcelona look tired and spiritless, demolishing an already teetering reputation that once made coaches scheme ways to simply not get overrun by its trademark passing attack.

Messi did not speak after the loss that promises to be the lowest point in an illustrious club career which has included 34 trophies.

But for defender Gerard Pique, the low Barcelona hit in Lisbon comes after a decline that the club has not been able to stop despite spending vast sums.

“This isn’t the first, nor the second, nor even the third time (this has happened),” Pique said in reference to Barcelona's losses at Juventus, Roma, and Liverpool in the knockout rounds of the Champions League in the three previous seasons.

“We have hit rock bottom. This club needs changes at every level,” Pique said. “I don’t mean just players and the coaching staff ... the club needs structural changes." He added: "For several years, regardless of who our coach is or which players are on the pitch, this team doesn't have what it takes to compete in Europe."

Pique’s comments have been interpreted in Spanish sports media as a call for club president Josep Bartomeu to call early elections at Barcelona.

The club said Saturday that Bartomeu has called a board meeting for Monday. It would be a big surprise if the club does not fire coach Quique Setién, who it brought in to replace Ernesto Valverde in January.

Barcelona’s real conundrum is how to give Messi a winning team before age catches up with him.

Messi is 33 years old, and while still arguably the best player in the world, his window for lifting a fifth European Cup is closing.

The Argentine’s contract expires next summer. While he has always stated his commitment to the club, Messi has made it clear that he is not ready to accept mediocrity.

The squad is aging along with its all-time leading scorer. Pique, Luis Suárez, and Arturo Vidal are also 33. Sergio Busquets and Ivan Rakitic are 32, Jordi Alba 31.

Those veterans, however, are still the pillars of the squad because Barcelona’s expensive acquisitions have not panned out.

Since Paris Saint-Germain tempted Neymar away from Camp Nou, Barcelona has spent over 400 million euros (around $470 million) on three players that were supposed to be stars.

Ousmane Dembele, hailed as the speedster that would give Barcelona an added dimension in attack, has been hit by injuries.

Philippe Coutinho, the most expensive transfer in Barcelona's history, lasted 18 months before being loaned to Bayern, where he contributed to Barcelona’s misery Friday by scoring twice against the team that holds his rights.

Time and money are working against Barcelona.

The coronavirus pandemic dealt a financial blow to clubs by eliminating stadium ticket revenues with fans prohibited from attending matches. Teams only have a few weeks, and reduced financial resources, to make signings before the new season starts next month.

Barcelona has already signed midfielder Miralem Pjanic from Juventus and winger Francisco Trincão from Braga but the team remains in need of major work.

The only positive development for Barcelona is the emergence of its first crop of homegrown talents in several years.

Besides Messi, the starters with the best chances of being kept are goalkeeper Marc-Andre ter Stegen, the team’s best player after Messi, and midfielder Frenkie de Jong, who at 23 should be given time to improve.

Others may end up staying because their high salaries make them difficult to sell.

Even Pique, with his voice quaking with emotion, said that he would be willing to quit his boyhood club if needed to make way for “fresh blood.”

“A club like Barca has to be competing with the best, it’s that simple,” Pique said. “And we have reached the point where we can’t. You can’t cover up what anyone can see on the pitch.”