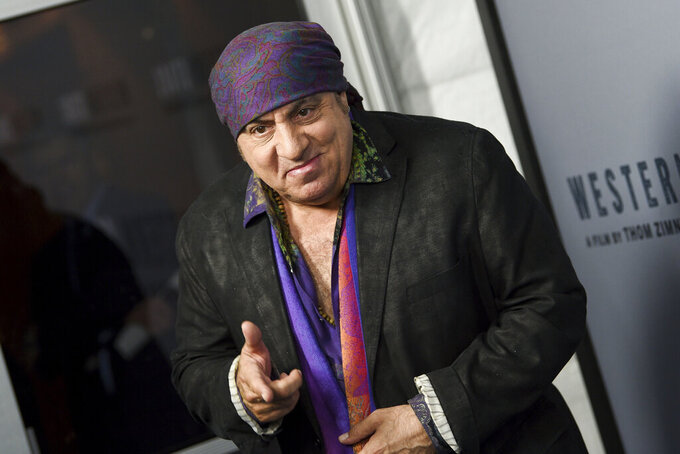 Connecticut is turning to music in an effort to get kids more interested in school and help combat the learning loss suffered during the pandemic.

Gov. Ned Lamont and state education officials announced Tuesday that Connecticut's public schools will be integrating a curriculum called TeachRock, the brainchild of Rock & Roll Hall of Famer Steven Van Zandt and his nonprofit organization, the Rock and Roll Forever Foundation. The curriculum includes lesson plans in most subjects, tailored to different grade levels, all viewed through the lens of music.

Subjects include things like the Vietnam War and protest music, Langston Hughes' poetry and the blues and hip-hop and its influence on politics.

“Statistics show that if a kid likes one single teacher or one single class, they will come to school, and we want to be that class," Van Zandt said. “The days of dragging young people to some old-school education methodology I think are over."

Lamont said the program ties in perfectly with his push to re-engage children who may have fallen behind during the pandemic or have been absent from school altogether. TeachRock can help get kids smiling again and excited about learning, he said.

“As Steven said, there's nothing better than music to make them do that,” Lamont said. "It just lets out a big sigh of relief and then along the way you're learning a little bit about history, a little bit about culture, maybe you're hearing some lyrics that speak to you and you share that with a friend. I think it's just what we need right now.”

The program will start with a cohort of 10 Connecticut school districts who must apply to participate in the program. It is designed to expand every school year.

Van Zandt and the TeachRock board, which includes his E Street band partner Bruce Springsteen, Jackson Browne, Martin Scorsese and Bono, developed the curriculum over 15 years with the help of education experts.

Van Zandt said it is a response to the No Child Left Behind push, which he said pushed the arts out of schools in favor of test-based results in core subjects.

His organization says more than 40,000 teachers in thousands of school districts have registered to use lessons from the program, but Connecticut is the first state to partner with TeachRock.

Van Zandt said there are no hard statistics yet on whether the program has had an impact on problems such as student retention and graduation rates, but he's hopeful.

“It's just a matter of finding that common ground with a kid,” he said. “They are ready to be educated. You don't have to talk kids into being curious. You just have to find something they are curious about.”

A bipartisan proposal to restore Connecticut’s insolvent unemployment compensation fund was announced Tuesday, with advocates predicting the plan will create “long-term viability” for the fund that has taken a huge financial hit during the pandemic.

Financed by employers, the fund has been insolvent for 48 of the past 50 years, according to Lamont's office, forcing the state to borrow money from the federal government. So far, $712 million has been borrowed during the current recession, a huge sum that many employers feared they would have to repay in higher unemployment taxes.

Besides restoring the fund's solvency, proponents said the proposal, which needs legislative approval, will reduce taxes on at least 73% of businesses by reducing rates on certain employer taxes, reforming benefits and other changes.

Chris DiPentima, president and CEO of the Connecticut Business and Industry Association, called the package of reforms “the most significant set of reforms in the history of the state's unemployment system.”

The governor on Tuesday issued a series of new executive orders that essentially consolidate or extend many of his previous orders related to the pandemic to May 20. Lamont said the move reduces the number of executive orders issued under Connecticut’s state of emergency by roughly 60% while providing a “clearer picture for residents” of those orders that will remain in effect.

Earlier in the day, Lamont said some powers within the public health executive orders enable his acting public health commissioner and chief operating officer to “respond quickly, as needed, if the circumstances change on vaccinations or variants.”

“But,” Lamont said, “it’s going to be narrowed to just those areas.”

Last month, the General Assembly voted to allow the Democrat to extend his emergency powers for at least one more month, to May 20. While Republican lawmakers raised concerns with the move, Democrats said the governor’s extraordinary authority was still needed to respond to the ongoing pandemic.

Lamont has said his administration plans to work with legislators to determine which orders should be codified in state law, including the requirement to wear face masks in businesses and public places. On Monday, the governor announced that many COVID-related restrictions on businesses will be lifted on May 1 and then May 19.