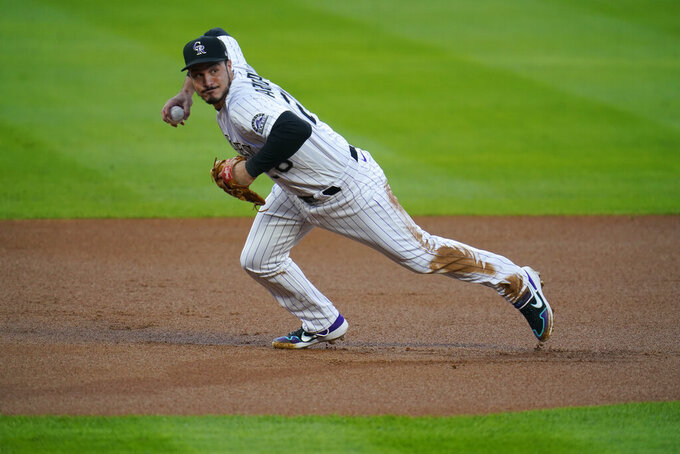 Just that time of year, the Colorado Rockies manager contended Wednesday in a Zoom call.

“My expectation is that they’ll be with us come opening day,” Black said.

Black actually thinks that trade rumors, any sort of trade rumors, are a good thing over the offseason because it keeps baseball in the conversation during this time dominated by college football, the NFL and the start of the NBA season.

Arenado is scheduled to make $35 million in 2021 as part of a $260 million, eight-year contract he signed with the Rockies in 2019. There's one caveat that could cause potential bidders to balk: The deal includes an opt-out clause after the '21 season.

The 29-year-old Arenado struggled — by his standards, anyway — at the plate during the abbreviated 2020 season as he hit .253 with eight homers before missing the final nine games with a left shoulder bone bruise. There was nothing wrong with his defense, though, in earning an eighth straight Gold Glove.

Story's name has also popped up in trade speculation. The shortstop led the NL in stolen bases last season and was the only player in the majors with three hitting streaks of at least nine games.

“You know how I feel about both of those guys,” Black said. “They’re great players and they’re great Rockies. I anticipate them being on the team. I think you said it best about the rumors and speculation: In most cases what we hear, what we read, I think is 90% of that — rumors.”

Other than the swirling speculation, it’s been a rather quiet offseason for a Rockies team that’s missed the playoffs the past two seasons. No big free agent signings. The biggest headline was severing ties with often-injured outfielder David Dahl, who's since signed with the Texas Rangers. Colorado didn’t offer him a contract coming off right shoulder surgery.

“In David’s case, probably for him, to get out of the in-and-out of altitude, might give him a better chance to stay healthy and continue on and play like he's capable,” Black said.

Despite being in the same division with the World Series champion Los Angeles Dodgers, along with the upstart San Diego Padres, Black feels this team, with this nucleus, can still be in the thick of a playoff chase.

“I’ve seen it from this group," Black said. "We're capable. Now, we have to do it between the lines.

“I do think we have the talent to contend.”

He has recently checked in with outfielder Ian Desmond, who opted out due to COVID-19 concerns. Black feels Desmond will be back in the lineup in 2021.

Black also said reliever Scott Oberg is playing catch again after not pitching last season due to blood clots in his right arm. It's t he third time in his career Oberg's dealt with blood clots.

In addition, Black texted Arenado to congratulate the third-base wizard on winning another Gold Glove. No issues with the shoulder, either, Black maintained.

“I think Nolan’s in great shape as far as the shoulder and where it is health-wise,” Black said. "We sort of knew that at the end of the season, if given a month of rest that the shoulder would bounce back.

“As normal, he’s preparing as hard as anybody for the 2021 season.”

Rumors aside, Black's counting on Story, Arenado and Charlie Blackmon to anchor the lineup.

“They’re the guys that make us go,” Black said. “I always feel with this group, we have a chance.”