Rodríguez wins for Red Sox in return from year-long layoff 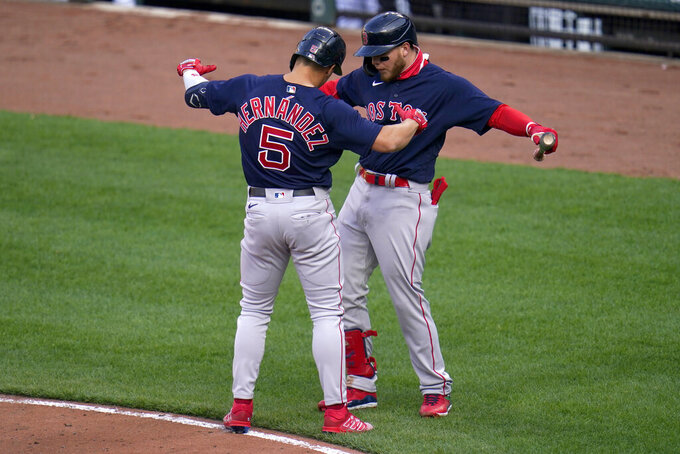 BALTIMORE (AP) — For Eduardo Rodríguez, it felt like his first big league start.

The day ended with the same type of emotion.

Rodríguez won in his return from heart inflammation that caused him to miss the 2020 season, allowing three runs over five innings Thursday to lead the Boston Red Sox over Baltimore 7-3 Thursday in the Orioles' home opener.

“It was a special day," Rodríguez said. “I went out there in the first inning and it was like my first time in the big leagues. I was almost too excited in the first inning. But I settled down. These guys made plays to win the game and that's what we're here for.”

Rafael Devers and Kiké Hernández homered for the Red Sox, who have won four consecutive games for the first time since Aug. 14-18, 2019. Devers' home run went 452 feet in the center-field seats, Boston's third-longest since the start of 2019.

Boston has scored 33 runs in the four wins after managing five while getting swept by the Orioles in a three-game series at Fenway Park.

A day after his 28th birthday, Rodríguez made his first big league appearance since Sept. 29, 2019, against the Orioles at Fenway Park.

He started last season on the injured list, and the Red Sox announced Aug. 1 that Rodríguez was going to miss the entire pandemic-shortened season because of myocarditis related to COVID-19. At the time, Red Sox chief baseball officer Chaim Bloom said he was optimistic Rodríguez would pitch in 2021.

“When they told me that I had myocarditis, my first question was how long is this going to take and if I was going to be able to go back and be normal,” Rodríguez said. “They told me it was going to be fine. After that, I was able to take care of it and get back here today.”

Rodríguez started this season on the injured list after experiencing a dead arm during spring training.

Rodríguez (1-0) gave up four hits, including two-run homers by Ryan Mountcastle in the first and Pedro Severino in the fourth — the first home runs allowed by Boston this season. Rodríguez struck out seven and walked none, throwing at up to 94.7 mph.

“I think today’s story is not about hitting or defense, it’s about Eduardo," Boston manager Alex Cora said. "For him to compete out there and give us five strong innings, that was very gratifying for the organization, for each individual here. For him to perform that way is a testament to where he’s at right now in his career, who he is as a person. I know it’s a big day for him."

Orioles third baseman Rio Ruiz was hit on the left elbow by Rodríguez in the fourth, but the plate umpire Jeremie Rehak ruled he swung at the pitch. Baltimore manager Brandon Hyde angrily emerged from the dugout to protest the call and was ejected.

That was the quickest ejection I’ve ever had," said Hyde, who has been ejected six times in his career, five as a manager. "I was very surprised by it. Leave it at that.”

Matt Harvey (0-1), who didn't get a decision in his Orioles debut last week at Fenway Park, allowed four runs and seven hits in five innings with five strikeouts and a walk.

Boston took a 4-3 lead in the sixth on an RBI groundout by Christian Arroyo and a run-scoring single by Franchy Cordero off Paul Fry, who was pitching for the second straight day and third time in four games.

J.D. Martinez had an RBI double in the seventh and scored on Marwin González single off Shawn Armstrong. Hernández homered off Tyler Wells in the eighth.

However, this day belonged to Rodríguez and his teammates were excited to have him back.

“It was a special day for us,” catcher Christian Vázquez said. “It was a tough year for him last year. We're happy to see him back. If we have him healthy this year, we're going to be in a good place.”

Trey Mancini was given a standing ovation when introduced and again before his first home at-bat following treatment for colon cancer.

The 29-year-old was diagnosed during spring training last year and missed the pandemic-shortened 2020 season. Boston players applauded during the ovation and Mancini tipped his batting helmet in appreciation.

He grounded into a forceout, beating the relay throw to avoid a double play.

“It was amazing. I think it's well-documented at this point what I went though and what it took to get back to playing," Mancini said. “It meant the world to me. Even though it was like 25% capacity, it felt like a full stadium out there, and I had goosebumps thinking about it.”

Mancini said he teared up when he heard the initial ovation.

“That's probably what will stay with me the most,” he said.

The game drew 10,150. The Orioles are allowing up to 11,000 to attend games under coronavirus restrictions, about 25% of the capacity at Camden Yards.

Red Sox: LHP Chris Sale, who underwent Tommy John surgery on his left elbow prior to last season, is throwing from 120 feet, but manager Alex Cora does not know when he will throw off a mound.

Orioles: OF Outfielder DJ Stewart (hamstring) has been working out at the team’s alternate training site in Bowie, Maryland, and could return for this series.

Red Sox: After a day off, RHP Garrett Richards (0-1, 27.00 ERA) will face the Orioles on Saturday for a second time this season. He allowed six runs and seven hits over two-plus innings in an 11-3 loss on Sunday.