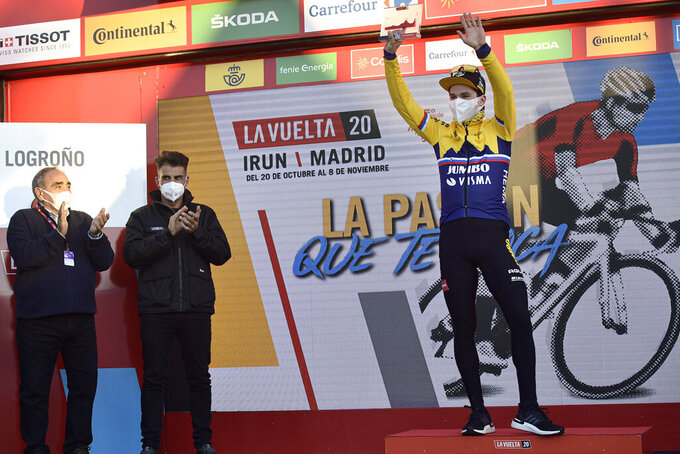 ALTO DE LA COVATILLA, Spain (AP) — When Richard Carapaz powered away on the race’s decisive climb with the Spanish Vuelta title at stake, Primoz Roglic appeared for a few agonizing moments to be on the brink of another collapse like the one that cost him the Tour de France title.

Instead, the Slovenian rider found his pace with some help from other riders to protect him from the headwind atop the beyond-category Alto de la Covatilla. Almost two months after losing the Tour on the penultimate day, Roglic is now poised to win his second straight Vuelta title after Saturday’s last competitive test.

Carapaz beat Roglic to the finish line of the mountainous 17th stage, but it was not enough for the Ecuadorian to move ahead in the general classification. Roglic’s advantage over Carapaz was cut from 45 to 24 seconds ahead of Sunday’s largely ceremonial stage.

“It is good to have exciting finishes. It was exciting, but I still had legs just enough that I knew that if I go at my own tempo it should be enough,” Roglic said. “At the end, you need to stay under control and just do your thing."

France’s David Gaudu won the grueling 178-kilometer (110-mile) ride from Sequeros that took riders up six categorized climbs in the rain and fog.

Sunday’s ride to Madrid is now set to be a chance for Roglic and his Jumbo-Visma teammates to savor the victory — after he came so close to winning this year’s Tour de France.

In September, Roglic had entered the time trial on the penultimate stage of the Tour with what appeared to be a sufficient advantage, only to have it blown away by eventual champion Tadej Pogacar.

This time, Roglic had enough left — just — to squeak out the victory.

“My team really helped me. Again, a really nice race for the whole team right from the start,” Roglic said. “I am really happy. (It is) a really nice way to finally finish the season.”

The Grand Tour had two main contenders as Roglic and Carapaz traded the red jersey back and forth. Roglic took it back for good after winning a time trial on Stage 13.

Ineos Grenadiers rider Carapaz fought to the end, aiming for a second Grand Tour after winning the Giro d’Italia with Movistar last year. He made a powerful charge on the final ascent of the stage in western Spain, as the narrow windy road emerged from the fog of the valleys and rose into the clear.

“I know this ascent well, its toughest stretches, and I am pleased with my huge effort,” Carapaz said after he was congratulated by Roglic for his challenge.

Following cycling tradition, Roglic’s rivals won’t challenge his lead on Sunday’s stage, when the sprinters will dispute the flat 139-kilometer (86-mile) ride into the center of Spain’s capital.

Given the ongoing health emergency caused by the coronavirus pandemic, race authorities have asked fans to stay at home for the race finale.