On a roll, Medvedev steers Russia to ATP Cup title 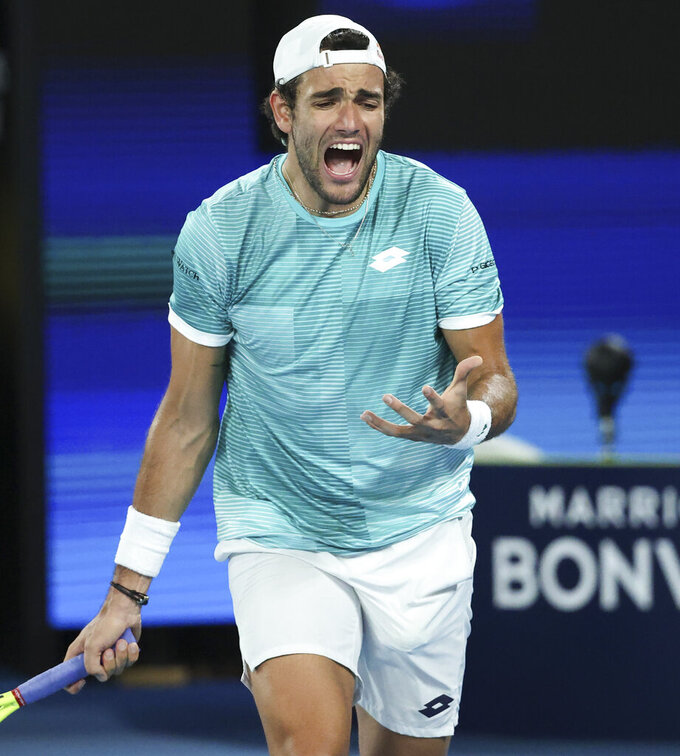 MELBOURNE, Australia (AP) — After celebrating their ATP Cup triumph as teammates for Russia, Daniil Medvedev and Andrey Rublev will go their own ways at the Australian Open next week and may meet at Melbourne Park as rivals in the quarterfinals.

Medvedev improved his winning streak to 14 matches and secured Russia’s 2-0 victory over Italy in the ATP Cup final on Sunday when he beat Matteo Berrettini 6-4, 6-2 at Rod Laver Arena. Rublev had given his team a commanding start with a 6-1, 6-2 win over Fabio Fognini.

The No. 4-ranked Medvedev has certainly been peaking, winning his last 10 matches against top-10 players, including a sweep of the top three at the ATP Finals last year and a close victory over Alexander Zverev in the semifinals here.

“It’s a confidence boost,” he said.

The Australian Open starts Monday but Medvedev and Rublev, who has won five titles and 45 singles matches since the start of 2020, get a day off before their first-round matches.

As for having such a run of big matches so close to a major, Medvedev said he wouldn’t know for a couple of weeks whether it was ideal preparation for a major or not.

“Get the momentum going, sometimes it helps you — I did last year (when) I won two tournaments in a row,” he said. “At the same time it’s tiring. Played four tough matches, yesterday especially.”

The Russians didn’t lose a singles match during the group stage or the playoffs this week, and were the second team to win the ATP Cup after Novak Djokovic led Serbia to the inaugural title last year.

The first edition featured 24 countries and was staged in three Australian cities: Brisbane, Perth and Sydney. Because of restrictions imposed during the COVID-19 pandemic, including a two-week quarantine for all international arrivals, this year it was cut to 12 teams and played entirely at Melbourne Park. Along with five other tuneup tournaments.

Italy veteran Fognini was in the team that lost to Russia in the group stage last year. In the final, he said it was a bit of a blur.

“We played with the two best shape guys in the circuit at the moment,” Fognini said. “Especially in my case, it’s tough to say, but I don’t have these kind of matches, this kind of speed during the point. At the moment was too much.”

It appeared that Rublev and Medvedev hadn't looked too far ahead in the Australian Open draw, until Russia team captain Evgeny Donskoy raised the topic of their projected quarterfinal match at the post-match news conference.

“I’m just actually more happy for the guys that they’re achieving the level that is going to be out of the limit soon because they’re playing unbelievable tennis,” Donskoy said. “Yeah, just wishing them to play the same like they played today in the main draw of Australian Open. If the level going to be the same, these guys going to see each other in the quarterfinals.”

Medvedev, who is seeded fourth and opens against Vasek Pospisil, said: "Yeah, it’s going to be great. You cannot change the draw. If it happens, it’s perfect.”

Rublev, who is seeded 7th and opens against Yannick Hanfmann, said “I wish.”

“It’s too far to say something about it now. We have to go match by match. Daniil have tough first round. Me, I have as well. We’re not going to meet in second round, so we need to win couple of matches first.”