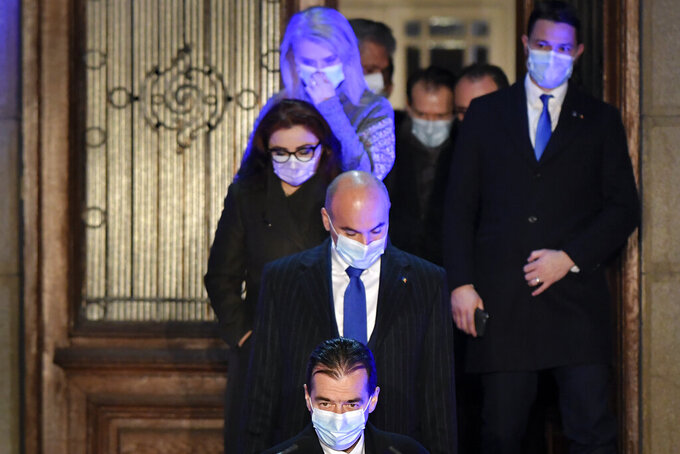 With 95% of votes counted in Sunday’s election, Ludovic Orban’s National Liberals (PNL) have been defeated by the populist Social Democrat Party. But the Social Democrats appear unlikely to emerge on top in what promises to be prolonged post-election wrangling to form a new coalition government.

Orban — who is also the party leader — said he was resigning from government because the PNL had to focus on talks to establish a new parliamentary majority.

“My objective is to form a majority that will not include the PSD,” he said, using the Romanian acronym for the Social Democrat Party.

“I want my resignation to show clearly that I am not holding onto any position,” Orban said. “I place Romania’s interests above PNL’s interests and above my personal interests.”

Orban's Cabinet will remain in office in a caretaker capacity, but under Romania's law must be replaced by a new administration within 45 days.

Until then, Defense Minister Nicolae Ciuca will act as the prime minister, having been designated for the post by President Klaus Iohannis.

With most ballots counted, the PSD had around 30% of the vote, with Orban's reformist National Liberal Party trailing them by about 5%. The progressive USR-Plus alliance, which has pledged not to be part of any Social Democrat-led government, won about 15% of the vote.

Only two other parties crossed the 5% threshold to enter Parliament: the far-right AUR alliance, whose vocal opposition to coronavirus restrictions resonated with close to 9% of voters, and the UDMR party that represents the country's Hungarian minority, which won around 6%.

The AUR alliance was established just a year ago under leadership that opposes same-sex marriages and was supportive of Orthodox Church clerics who defied pandemic restrictions in Romania to hold religious ceremonies. But it did surprisingly well among Romania’s expatriates. As soon as the vote count had been announced Monday, one of its leaders, George Simion, got into a war of words with the Hungarian minority's party saying he supports a parliament initiative “for a change of constitution to include a ban of ethnic parties.”

About 4 million Romanians who live abroad, mostly in Western Europe, have traditionally voted for reform-oriented parties that seek to ally the county with the European Union mainstream, but the coronavirus pandemic has apparently upended traditional allegiances.

The National Liberals have controlled Romania’s minority government since October 2019 when the PSD lost a confidence vote in parliament after a chaotic tenure that had seen it run through three prime ministers and dozens of ministers in the space of just three years. The Social Democratic-led government had drawn heavy criticism from the EU for its interference with the judiciary and a cascade of corruption scandals involving prominent members.

But it defied pre-election polls to become the nominal winner of Sunday's vote with unfeasible promises to preserve Romania’s welfare state model and after the minority National Liberals government faced strong criticism for its handling of the pandemic.

Romania was plagued by widespread poverty even before the pandemic, with over 25% of the population of 19 million living on less than $5.50 a day. The pandemic has exacerbated structural problems, including the near-collapse of the public health care system.

As a result of the pandemic and virus-related restrictions, Romania’s fiscal deficit is expected to widen this year to around 9% of gross domestic product, compared with 4.3% in 2019. The coronavirus continues to spread in Romania, with almost two-thirds of over a half-million infections and nearly a half of the country's over 12,300 virus-related deaths registered in the past two months alone.

Only 33% of potential Romanian voters went to the polls Sunday, compared with nearly 39.5% in 2016. Observers blamed the historically low turnout on voters' fears of COVID-19 infection, but also on general disillusionment with Romania's political class.

This story has been corrected to show that the last name of one of the AUR leaders is Simion, not Simon.