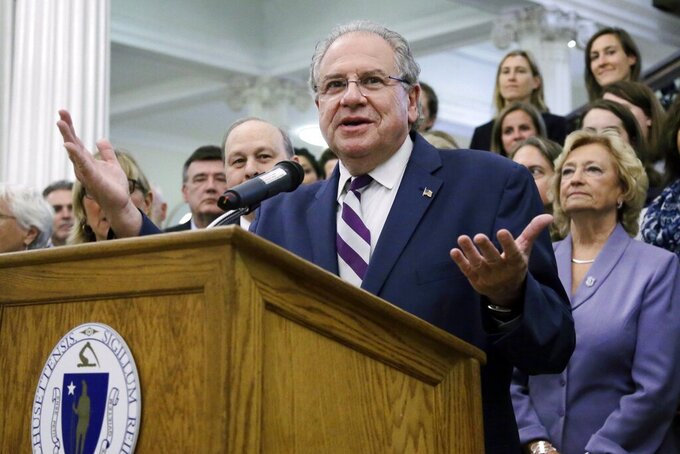 FILE - In this Aug. 1, 2016, photo, Robert DeLeo, the speaker of the Massachusetts House of Representatives, speaks at a bill signing ceremony at the Statehouse in Boston. DeLeo announced his resignation on Monday, Dec. 28, 2020, in a letter read to members in the chamber. (AP Photo/Elise Amendola, File)

The Massachusetts House of Representatives elected Ronald Mariano as expected Wednesday to be the chamber's next speaker.

Mariano, 74, a Quincy Democrat, replaces Robert DeLeo, who resigned Tuesday after a record 12-year stint in the top spot. DeLeo is expected to take a position at Northeastern University, his alma mater.

The state's recovery from the coronavirus pandemic will be Mariano's first priority, he said.

“The climb back to where we were just one year ago will be a long one, but this is job number one: meeting the needs of each resident throughout this time of crisis,” Mariano said in his first speech after election.

The former majority leader promised that Massachusetts will lead the way to make lasting, positive change.

“President-elect Joe Biden has said that his presidency will be focused on ‘building back better.’ Well I say, ‘Look to Massachusetts, Mr. President!’” Mariano said.

Some of the other issues he plans to address are the lack of affordable housing in the state, controlling rising pharmaceutical prices, improving public transportation, strengthening community hospitals, and investing in offshore wind and high-speed internet.

Mariano, before the vote, also pledged to diversify his leadership team.

“I feel an obligation to put together a team that’s representative of the diversity of the body,” he told The Boston Globe on Tuesday.

Mariano, a former public school teacher, was first elected in a special election in 1991 and also served 18 years on the Quincy School Committee. He was named majority leader in 2011.

At 74, he will be the oldest speaker since at least the Civil War, the Globe reported.

Mariano did not face any challenges. Boston Democratic Rep. Russell Holmes had considered a challenge but stepped aside Monday when it became apparent that most of the Democratic caucus backed Mariano.

“I have known and served with the gentleman from Quincy for many years and I look forward to continuing and building upon the professional and cordial relationship we have developed,” Jones said in a statement.

Mariano is expected to continue DeLeo's legacy, according to the state Democratic Party.

“In the weeks, months, and years ahead we’ll face many challenges — COVID and our recovery, health care, and climate change to name just a few," party chair Gus Bickford said in a statement. “Speaker Mariano has led on these issues throughout his career as representative and majority leader. I have no doubt he’ll use his broad experience and history of service to unite our Commonwealth and face these challenges head on.”

The speaker wields enormous power. The speaker can reward supporters with plum committee assignments and extra stipends while also punishing critics and blocking bills he opposes while pushing others that he favors.

The three speakers before DeLeo all left under a cloud. His immediate predecessor, Salvatore DiMasi, was convicted of federal corruption charges. He ended up serving five years of an eight-year prison sentence.