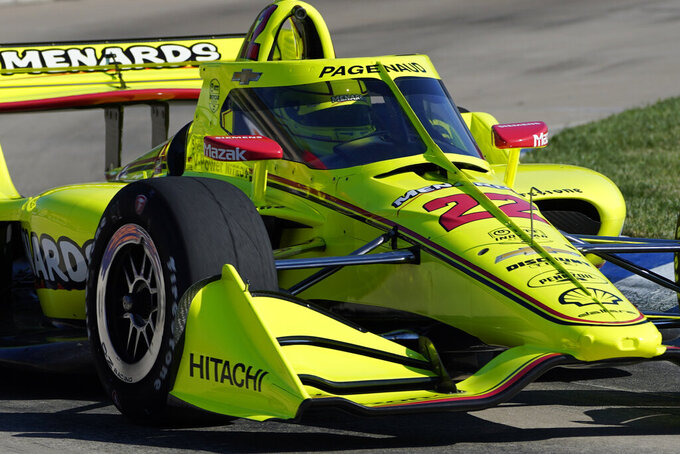 Alexander Rossi has tried to stop dwelling on his bad days, a necessary self-improvement chore when the last great day was two years ago.

Rossi races Sunday at Road America in Elkhart Lake, Wisconsin, site of his last victory in 2019. He went winless last year and this season has led just two laps. He is 14th in the standings.

“As the weeks go by, it's getting easier to swallow the pain of it, I'm getting accustomed to it,” Rossi told The Associated Press. “The motivation is still there, and I would say it's as high or higher than anyone on the grid. I'm just able to get over it much quicker than maybe before. Instead of feeling sorry for myself through Monday afternoon, I'm up and at the gym at 7 o'clock.”

Andretti Autosport is an enigma: Ryan Hunter-Reay and James Hinchcliffe are having terrible years and Rossi is again underperforming expectations. But Colton Herta has a victory, has contended in other races and at ninth in the standings is the highest-ranked driver on the four-car team.

Hunter-Reay, who is in a contract year and hasn't won a race since the 2018 season finale, said Herta's performance indicates that Andretti as a whole is not a mess. Both he and Rossi believe the best tracks for Andretti are coming up, starting with Road America.

“We’re struggling to keep cars in the top 10 at the moment. It’s not coming easy,” said Hunter-Reay. “But the second half of the schedule I think suits Andretti’s strong suits.”

“It is the harsh reality but we need to understand why the races that we win are when we are so superiorly dominant,” Rossi said. "You're not going to win a championship if you can only win when you start first or second with a car that's two or three tenths (of a second) clear.

IndyCar this season has had seven winners through eight races with points leader Pato O'Ward the only repeat winner. Rossi's best finish is seventh, even though he's started second twice.

Rossi is not calling for any changes among his No. 27 Honda team. He considers Road America “one of the best permanent road courses in the world” and believes a breakthrough is near.

“I've got one of the most talented groups on pit lane, which is why it makes this so painful and frustrating, for all of us. We've worked hard to keep the continuity,” Rossi said. “But I'm not thinking about Detroit or Indianapolis anymore, I honestly do not care. The motivation is still there, it's as high if not higher than anyone else on the grid.”

Team Penske is winless this season but not out of the game. Both Will Power and Josef Newgarden could have won Detroit's doubleheader and Simon Pagenaud was third in the Indy 500, a race his team admittedly focused on and expected to win.

Pagenaud is in a contract year and boss Roger Penske said he expects to again field four cars next season. He said "I hope so” when asked if Pagenaud would be in a seat.

There's been speculation Pagenaud could receive a one-year deal in IndyCar with Penske and then move to Penske's new Porsche sports car program for its 2023 launch. Pagenaud, who rarely discusses contracts, made it very clear he wants to be in IndyCar.

“I love IndyCar racing. I love Indianapolis 500. My goal is to be in IndyCar for a long, long time to come,” Pagenuad told AP. “At the moment I’m in my championship. Like I said, in the beginning of the year, contracts will take care of themselves when it comes the time.”

Pagenaud is technically sixth in the standings but moves up when Rinus VeeKay, at fifth, misses Sunday's race with a broken collarbone. Newgarden is ranked fourth.

IndyCar supporters took exception this week after the Los Angeles Dodgers said 52,078 fans at Dodger Stadium on Tuesday night was "the largest crowd in a U.S. professional sports league game since the start of the pandemic.” There were 135,000 at Indianapolis Motor Speedway on May 30 for what was and still is the largest sporting event in the world since the start of the pandemic.

Indy 500 attendance truthers also noted the crowd on race day sure looked much bigger than the 135,000 health officials approved. IndyCar and IMS owner Roger Penske is adamant his committee followed all guidelines and that he's got the files as proof.

He closed on his purchase of IMS about two months before the global shutdown. His first Indy 500 was held without spectators, his second celebrated as “the re-opening of America.”

Penske noted that 135,000 accounted for the grandstand seating but "we were allowed 50% in the suites, and then we had the industry. When it all adds up, it's close to 150 (thousand). We did exactly what we said we did and we have the whole manifest if anybody wants to look at it.”