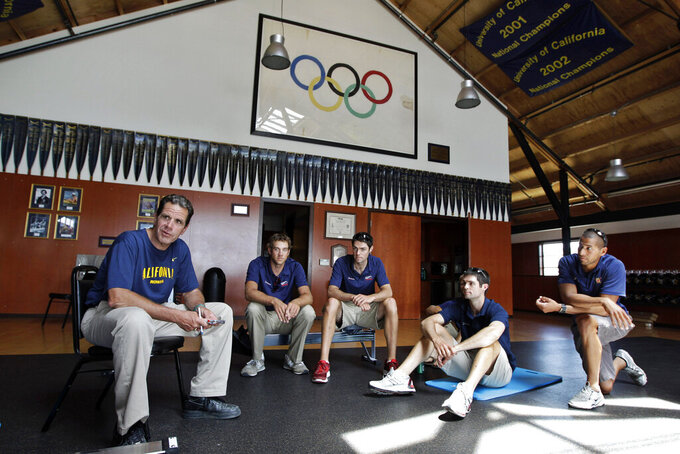 FILE - In this May 7, 2012, file photo, coach Mike Teti, left, talks to his United States eight man crew team during practice in Oakland, Calif. As the Tokyo Games approach, US Rowing is awaiting the results of a months-long assessment commissioned by the U.S. Olympic & Paralympic Committee of its national team programs, including the men's group based in Oakland, where longtime coach Mike Teti is being criticized by some rowers for what they call his intense and intimidating style. (AP Photo/Paul Sakuma, File) 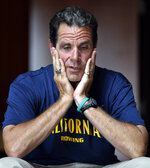 OAKLAND, Calif. (AP) — As the Tokyo Games approach, US Rowing is awaiting the results of a months-long assessment commissioned by the U.S. Olympic & Paralympic Committee of the sport's national team programs, including the men’s group based in Oakland, where longtime coach Mike Teti is being criticized by some rowers for what they call his intense and intimidating style.

Athletes offer drastically different accounts of what rowing is like under Teti’s leadership.

Members of the men’s eight boat team stood united behind Teti before departing earlier this month for Hawaii to train ahead of the Olympics, determined to limit any potential distractions as they prepare to race in Japan, and others said Teti’s coaching breeds winners.

But nine rowers who spoke to The Associated Press describing Teti’s intimidation -- all but one on condition of anonymity because they either want to continue in the sport or fear retaliation -- said they have direct knowledge of Teti physically threatening athletes or verbally attacking them if they challenged him in any way.

“He’ll vary so wildly from the guy that you think is actually going to have his uncle kill you if you don’t win … to the guy that’s crying and telling you that he loves you,” one former Olympic rower said. “That exists in the same guy -- and I believe both of them. There is a storm raging inside that guy that he has a hard time controlling.”

A former national team member said he witnessed Teti threaten another rower two years ago outside the Oakland boathouse. “I have heard Mike Teti tell athletes ‘If you take one more step, I am going to punch you ... I’m going to kill you,‘” said the rower, who didn’t want his name used because he may row again. The athlete who he said was threatened confirmed the account.

In response to questions from the AP, the 64-year-old Teti said, “I believe that I have coached fairly, with the athletes’ well-being in mind,” adding, “Any athlete who thinks they have been the subject of improper conduct or unfair treatment should voice that concern in the appropriate venue. US Rowing has reporting mechanisms and personnel in place for that very purpose, and has a zero tolerance policy for retaliation.”

Of the incident at the boathouse, he said: “It was a disagreement over the best way for an athlete to reach his highest potential. I expressed my feelings clearly, and firmly, and so did he. I called him moments later and we apologized to each other. … There were no threats of violence.”

After reaching out to Teti, the AP received more than a dozen unsolicited affirmations from former rowers, fellow coaches and other colleagues expressing gratitude for Teti’s leadership and guidance.

The law firm Arent Fox, which is conducting the rowing assessment, declined to provide a timeline for its work. The AP obtained a copy of a letter the firm sent rowers in January saying it planned “to review whether elite athletes’ concerns are capable of being heard in a fair and neutral way that does not contribute to a fear of retaliation.”

Some athletes have communicated their feedback about the culture under Teti directly to US Rowing CEO Amanda Kraus, who came aboard in November.

Kraus said the review “is not an investigation of any particular coach at US Rowing. It is a high-level assessment of the culture of our men’s and women’s training centers in an effort to ensure that our athletes’ concerns are being addressed and that fairness and transparency are always at the core of how we operate.”

Teti was investigated by the watchdog group SafeSport in 2018 and also in 2016 on behalf of the University of California at Berkeley, where he formerly coached. The SafeSport probe was closed with no sanctions and Cal never disclosed its findings.

The athletes critical of Teti said they accept that some yelling and profanity comes with competing for a hardnosed coach, but that Teti routinely takes it too far, even over what the rowers consider to be minor issues like misunderstanding travel schedules.

“Internationally, we routinely show up hamstrung by external things,” said an athlete recently at the training center, adding that rowers endure “systemic mind games” and “bullying.”

Teti, the only member of the National Rowing Hall of Fame inducted as an athlete and coach, rowed in the U.S. eight boat that won a bronze medal at the 1988 Olympics in Seoul and coached the men’s eight to gold at the 2004 Athens Games. Four years later in Beijing, he guided the eight boat to a bronze medal before beginning a successful tenure at Cal, where he stayed for a decade. Ahead of the Summer Games in 2012, he was called in to lead the eight in qualifying for London, where the boat finished fourth.

Former rower Ben Holbrook is among those who appreciated Teti’s style and drive.

“Everyone invited to his camp has already been incredibly successful in rowing in some way,” the 2004 Olympian said. “I have always thought that Mike’s job is to determine who of the most elite athletes can work together in the most pressure-packed moments to maximize the opportunity to win gold.”

But among others who talked to the AP, Teti regularly crosses the line.

“There isn’t anybody who he isn’t bashing. It’s always been just insufferable amounts of verbal, emotional abuse,” one rower said.

Two-time Olympic rower Greg Ruckman, who competed in the 2000 and 2004 Games, has filed multiple lawsuits over the course of more than a decade challenging the selection process for the team, which he told the AP was an attempt to allow athletes to escape Teti’s oversight by training elsewhere.

The 47-year-old Ruckman repeatedly broke into tears describing what he called the guilt he feels all these years later for ignoring Teti’s behavior so he could chase his Olympic rowing dream.

“I was one of the majority of rowers who kept their head down while they were rowing, and that was for eight years until 2005, and that was when I couldn’t continue that way,” he said.

The athletes condemning Teti’s conduct expressed concerns about his potential to ruin opportunities with possible employers during or after their rowing careers, given his wide-reaching connections with companies that provide flexible jobs allowing athletes to train and still maintain full-time work.

Many rowers remain thankful years later for Teti’s career assistance, but some said fears lingered that he might rescind his support.

“It’s certainly easier to focus on the more significant instances such as threatening to hit an athlete, and the verbal abuse is bad, the language is really bad, but athletes are willing to put up with a lot, given that they’re on a path to success, given that they’re at least provided the tools for them to then go perform,” one former Olympic rower said.

A former female coxswain at Cal told the AP that Teti was outraged when she approached him about being hired as a resident assistant in the college dorms, a position that would cover room and board and save her family $18,000 per year. Taking the job, however, also would mean missing one practice each week to be on call.

The woman, who did not want to be identified because she still works in the close-knit rowing community, said Teti began “screaming at me for 20 minutes,” accusing her of undermining his authority and of being selfish to pursue another activity given rowing had been why she chose Berkeley in the first place.

“I didn’t have the right to miss practice,” she said of his reaction, adding, “My hope is to empower athletes to not endure suffering.”

The rowers describe a training climate in which Teti verbally attacks athletes in front of teammates, publicly insults their family members or questions their commitment to the team. Another former Olympian said he remains scared of Teti because of the threats he made.

“Mike Teti is extremely verbally abusive and manipulative. He uses fear, your finances, your place on the team and even physical intimidation against you,” a former national team member said. “The mental well-being of his athletes is completely disregarded by him.”

One ex-Olympian said he hoped speaking out might bring change to US Rowing.

“Future guys need better than this,” he said. “This is just unacceptable.”