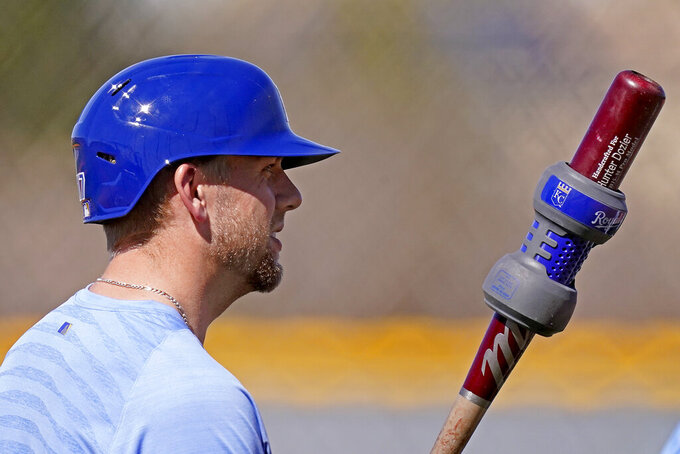 KANSAS CITY, Mo. (AP) — The Royals made official their $25 million, four-year contract with third baseman Hunter Dozier on Monday, ensuring that another member of their young foundation is under club control for the foreseeable future.

Kansas City has gone through several down years after back-to-back World Series runs culminated with a championship in 2015. The small-market club was forced to watch players such as Eric Hosmer and Mike Moustakas depart for larger deals in other places, then begin the slow and often painful process of rebuilding from within.

Dozier, the eighth overall pick in the 2013 amateur draft, always figured into those plans.

He had a breakout season in 2019, when he hit 26 homers and led the American League with 10 triples while driving in 84 runs. And while his numbers regressed slightly last season, when he missed the start with COVID-19 and wound up hitting just .228 with six homers in 44 games, the Royals believe his best seasons are still to come.

“As I've said many times, it's our goal to keep as many of our talented players here together as long as we possibly can,” Royals general manager Dayton Moore said. “Continuity and togetherness is crucial if we're going to win and have long-term success, but it takes players like Hunter as well, sacrificing some things as well in this process.”

All but four players expected to be major contributors to the Royals this season are under club control through 2022: left-hander Danny Duffy, outfielder Michael Taylor, catcher Salvador Perez and outfielder Jorge Soler. And in the case of Perez and Soler, they already have expressed interest in new deals for two of the power bats in their lineup.

As for the pitching staff? Most of them are 20-somethings that won't even sniff free agency for several more years.

“Like I've told all our players from the very beginning, we have no agenda,” Moore said. “We understand they have a very small window of opportunity to reach their financial goals in this game. They've earned certain things and we want them to reap the rewards of the financial aspect of Major League Baseball. And we want that to happen in Kansas City.”

Dozier's deal replaces a $2.72 million, one-year contract he agreed to on Dec. 2.

The 29-year-old Dozier made his big league debut in 2016, but he missed most of the following season with an oblique injury and a broken bone in his wrist. Dozier also missed time during the 2019 season with tightness in his side, and he has yet to play more than 139 games in a season.

Still, his defensive versatility — Dozier can play first base, third base and the outfielder — combined with his power, base-running ability and overall upside means he probably could have commanded more money on the open market.

“I think the biggest thing for me was security for my family,” he said. “I'm a family guy and I always think of them first. That was a big thing for me and my wife and my kids. Trusting my agent, Joe (Gaza), listening to him, knowing if I could chose I would be a Royal for life — it was a very easy decision for me. I want to be here. I want to win here.”

He knows “here” will be primarily third base in Kansas City next season.

The Royals signed former Indians slugger Carlos Santana to a $17.5 million, two-year deal as a free agent, then traded with the Red Sox and Mets to land outfielder Andrew Benintendi. Santana is expected to be the primary baseman and occasional designated hitter, and Benintendi will handle one of the corner outfield spots, freeing Dozier up to play third base.

“Hunter is willing to do whatever is necessary to help the team win,” Moore added. “We've known for a long period of time that Hunter's a foundational piece for our organization. He's a foundational player, person, and he represents all the things we desire in baseball players and people to represent our community.”