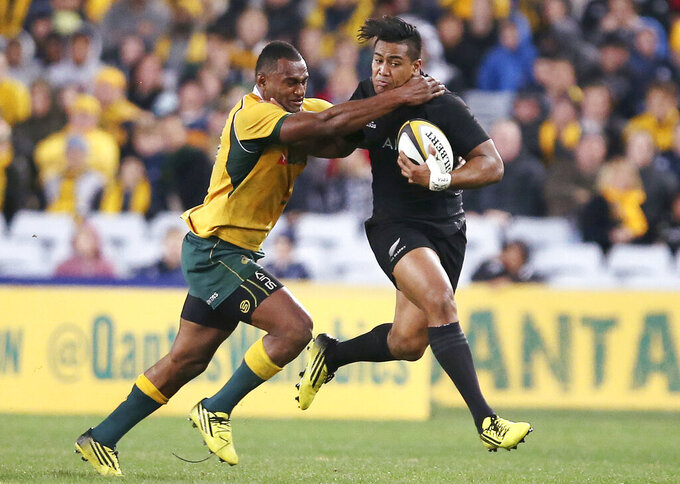 FILE - In this Aug. 8, 2015, file photo, New Zealand's Julian Savea, right, is tacked by Australia's Tevita Kuridrani during their Rugby Championship match in Sydney. Australia is set to host the Rugby Championship in November and December after a late change of mind by governing body SANZAAR, Friday, Sept. 11, 2020. (AP Photo/Rick Rycroft, File)

WELLINGTON, New Zealand (AP) — Australia has replaced New Zealand as the preferred host for the Rugby Championship in November and December after a late change of mind by governing body SANZAAR.

The tournament, already delayed from August and September, had been expected to be staged in New Zealand from Nov. 7 to Dec. 12 because of New Zealand’s initial success in containing the coronavirus pandemic.

But SANZAAR decided Friday after a conference call among members from Argentina, Australia, New Zealand and South Africa to move the event because of Australia’s comparatively more relaxed quarantine requirements. The decision has been criticized by New Zealand’s prime minister.

SANZAAR chief executive Andy Marinos said organizers were delighted to “put an end to the continued speculation about the tournament’s format and location.”

“SANZAAR ultimately determined that based on government-required quarantine protocols and commercial underwriting the Rugby Australia submission was the most desirable and workable in terms of tournament logistics for the essential pre-tournament preparation period and the six-week tournament itself," Marinos said in a statement.

Matches in Sydney might be able to be played in front of crowds of up to 20,000 fans observing social distancing. Crowds have been allowed at National Rugby League games and Aussie rules Australian Football League matches in New South Wales and Queensland states, the proposed venues for the Rugby Championship tests.

New Zealand’s current protocols have not allowed crowds at major sports events since a recent coronavirus outbreak in Auckland. Although, those rules will likely have been relaxed by November.

Australia’s regulations are also expected to make it easier for teams to train while in mandatory isolation. Offers of financial support for the tournament from the Australian and New South Wales state governments also helped swing the decision.

Several hurdles remain before the tournament can go ahead. An outbreak of COVID-19 within Argentina's national squad reportedly has seen 10 players and coach Mario Ledesma infected. Those players and Ledesma likely will have to test negative before being allowed to travel to Australia. It’s possible the tournament will go ahead without the Pumas.

The participation of the World Cup-winning Springboks has also been questioned because domestic rugby is suspended in South Africa, creating doubt around the match fitness of the players who haven't played competitively since March and only resumed full contact training this month.

South Africa’s international borders remain closed, with no commercial flights in or out as the country wrestles with the eighth-highest COVID-19 caseload in the world. However, the spread of the virus has slowed markedly in South Africa in recent weeks and there is pressure on the government to ease the travel lockdown.

“The Springboks’ participation will be dependent on the relaxation of that suspension as well as overcoming a number of other logistical challenges including the opening of international air borders,” Marinos said. “South Africa is only expected to return to competitive play next month, leaving a relatively short time to prepare.”

The traditional rugby schedule in the southern hemisphere has been severely disrupted this season. The Super Rugby tournament, featuring provincial teams from the SANZAAR members plus Japan, was suspended in March and did not resume. New Zealand was the first rugby union to re-establish a domestic Super Rugby competition, and was the first to welcome back crowds. But restrictions have recently been reintroduced.

If the six-week tournament goes ahead, visiting teams will have to be based in Australia for up to 10 weeks and will have to quarantine on their return home. That would mean All Blacks players, several of whom have young children, will be in quarantine on Christmas Day.

“New Zealand has very successfully hosted tournaments of this nature on a larger scale before,” Ardern said. “I have every confidence that the facilities we were proposing were up to scratch and the ability to play within three days of arrival was an important part of that pitch.”

“Now that the decision has been made we’re looking forward to seeing the All Blacks again take on the best of the Southern Hemisphere," he said. "We worked incredibly hard behind the scenes with a whole range of stakeholders, including SANZAAR and the New Zealand government, to ensure we were ready and able to host the Championship and we felt we were.”

Marinos said SANZAAR hopes to announce match dates and venues “in the very near future.”

Australia and New Zealand will also meet in Bledisloe Cup tests, likely in Wellington and Auckland, on Oct. 17 and 24 before traveling to Sydney for the Rugby Championship.