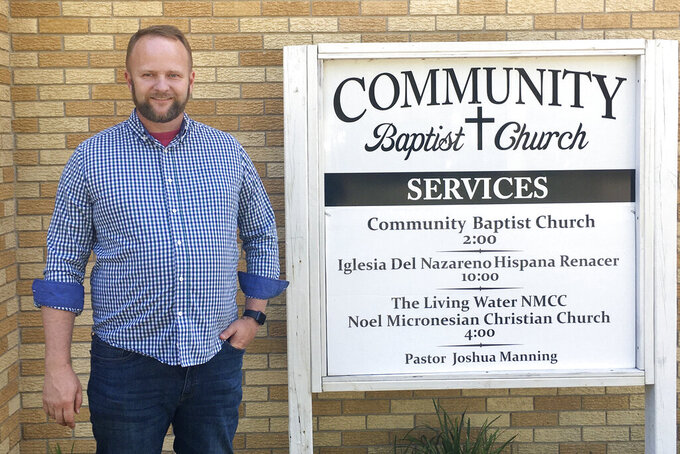 In this June 22, 2020 photo provided by Lauren Manning, Pastor Joshua Manning poses outside his Community Baptist Church in Noel, Mo. The town of 1,800 residents has been hit hard by the coronavirus, and Manning believes he, his wife and their three children all have it, though testing has not yet confirmed it. Manning said several members of his congregation also have either tested positive or are showing symptoms, so much so that he has closed the church for the time being. (Lauren Manning via AP)

O'FALLON, Mo. (AP) — Pastor Joshua Manning is waiting for test results, but he can tell by the persistent fever and body aches that he probably has the coronavirus. His wife and three kids have symptoms, too, and so many members of his Community Baptist Church in tiny Noel, Missouri, are infected that he’s closing the building until things improve.

“We did all the things we were supposed to do,” Manning, 41, said. “We shut down for two months. But the cases have just started to sprout up.”

Have they ever. At the start of June, McDonald County in the far southwestern corner of Missouri had fewer than two dozen confirmed cases of COVID-19, the illness caused by the coronavirus. As of Tuesday, 498 cases have been confirmed, many of them tied to the Tyson Foods chicken processing plant in Noel. Meat processing plants across the U.S. have been stung by outbreaks, including plants in other parts of Missouri.

Few places, though, have been hit like McDonald County. Though it has just 23,000 residents, only four other Missouri counties and the cities of St. Louis and Kansas City have recorded more cases.

Last week, Missouri health officials began testing all 1,400 workers at the Tyson plant. Results haven't been announced but the state health department said it is working with local health departments on contact tracing and is offering free testing. The U.S. Centers for Disease Control and Prevention plans to send investigators.

The state health department said other “clusters of cases” in southwestern Missouri are being watched. Over the past week, neighboring Newton County reported about 160 new cases and nearby Jasper County has seen 66 new cases.

Republican Gov. Mike Parson attributed the rise in confirmed cases to increased testing, not a resurgence of the virus.

“We are not overwhelmed,” Parson said during a news conference. “We are not currently experiencing a second wave, and we have no intentions of closing Missouri back down at this point in time.”

McDonald County — flanked by Arkansas to the south and Oklahoma to the west — is known for soaring bluffs, waterfalls and breath-taking beauty along the Elk River, a popular spot for camping and float trips. Noel is named for a founding family, but the yuletide-related name prompts thousands of Christmas cards and letters each December to be sent to the Noel Post Office so they can be stamped from “The Christmas City.”

Manning wonders if government leaders shouldn’t have flipped their approach to slowing the spread of the coronavirus.

“We were shut down for two months with no cases within 100 miles of here, and now’s the situation where we need to be shut down,” Manning said. “I will be fine. My family will be fine. But the risk is going to be older people. I want to keep them away from the church, keep them at home, because I don’t want that risk for them.”

Missouri was among the earliest states to start to reopen, and statewide restrictions were lifted effective June 16. Parson frequently urges Missourians to use common sense, but the McDonald County Health Department is going further, stressing the need to avoid gatherings beyond immediate family, to wear a mask when leaving home, and to practice social distancing.

Tyson said in a statement that its top priority is “the health and safety of our team members, their families and our communities.” The company said it has put in place protective measures that include symptom screenings for all employees before every shift, mandatory face masks, social distancing requirements and physical barriers between work stations.

McDonald County Presiding Commissioner Bill Lant said the outbreak was surprising given the county’s sparse population spread out over 600 square miles (1,550 square kilometers), but he’s thankful that most of those who have tested positive have shown mild symptoms or no symptoms at all. Only a few people have been hospitalized, and the county has reported no deaths.

“I think we will be fine, it’s just a matter of working together, and we are,” Lant said. “Everybody’s singing out of the same hymn book.”