Russia calls for collective security in Gulf, US blames Iran 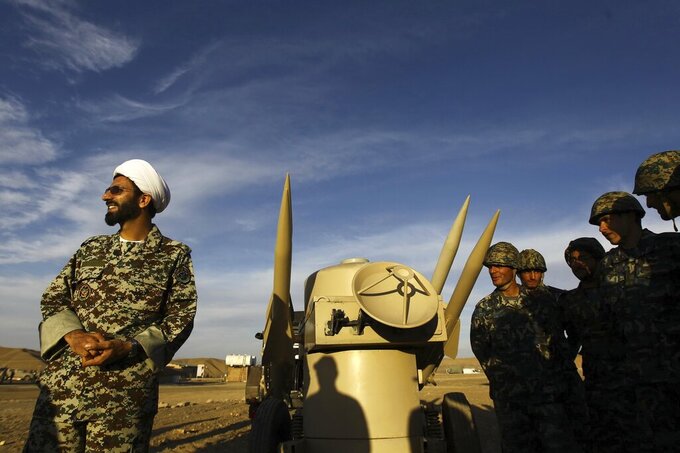 FILE - In this Nov. 13, 2012 file photo, an Iranian clergyman stands next to missiles and army troops, during a manoeuvre, in an undisclosed location in Iran. A decade-long U.N. arms embargo on Iran that bared it from purchasing foreign weapons like tanks and fighter jets expired Sunday, Oct. 18, 20202, as planned under its nuclear deal with world powers, despite objections from the United States. (Majid Asgaripour/Mehr News Agency via AP, File)

UNITED NATIONS (AP) — Russia’s foreign minister called for collective efforts Tuesday to prevent a large-scale war in the Persian Gulf and got strong support from all Security Council members except the United States, which called Iran the major culprit and urged that it be held accountable for supporting terrorists and destabilizing the region.

Sergey Lavrov told a high-level virtual council meeting that a worst case scenario was avoided earlier this year following the U.S. killing of Iran’s top general, Qassem Soleimani, and warned that “the situation remains fragile and could become dangerous and unpredictable again.”

But Russia, which holds the council presidency this month, believes that “if we work together openly and impartially, and if we pool our political will and our creative potential, we will be able to help the states of the Persian Gulf overcome this difficult historic period and create an effective system of collective security,” he said.

Robert Malley, president of the Brussels-based International Crisis Group, warned that “the regionwide conflict that now looms largest across the globe is a conflict nobody apparently wants -- a conflict triggered by tensions in the Gulf region.”

“It is far from inevitable," he said, but “a single attack by rocket, drone or limpet mine could set off a military escalation between the U.S. and Iran and their respective regional allies and proxies that could prove impossible to contain.”

“An inclusive, collective regional security dialogue aimed at lessening tensions may have only a small chance of materializing, and an even smaller chance of success, but under current circumstances it would be irresponsible not to give it a try,” Malley said.

There was no shortage of ideas on promoting collective security from council members.

U.S. allies Britain, France and Germany all supported confidence building measures in the Gulf and stressed their support for the 2015 nuclear deal with Iran that President Donald Trump pulled the U.S. out of in 2018 — but they also sharply criticized Iran for destabilizing activities.

Two days after the lifting of the U.N. arms embargo on Iran over U.S. objections, French Ambassador Nicolas De Riviere urged possible weapons suppliers and recipients “to exercise the utmost restraint and responsibility in considering the consequences that possible transfers could have for regional security and stability, and to draw the necessary conclusions.”

Britain’s acting ambassador, Jonathan Allen, said Iran has continued to transfer arms to regional groups and told the council the UK would work “to find a suitable solution to Iranian proliferation.”

German Ambassador Christoph Heusgen criticized human rights violations in Iran, where, he said, “civilian and political rights are violated every day,” prisons “are the most abhorrent in the whole region,” and “religious minorities like the Baha’i are persecuted.”

U.S. Ambassador Kelly Craft, meanwhile, dismissed any idea of collective security for the Gulf, touting instead the Trump administration’s new approach to the Middle East, including its key role in promoting diplomatic relations between Israel and the United Arab Emirates and Bahrain.

Responding to Russia’s promotion of security for the Persian Gulf, Craft said: “Respectfully, I think the solution is much easier: This council must simply muster the courage to hold Iran accountable to its existing international obligations.”

“The United States recognizes that Iran is the single greatest threat to peace and security in the Middle East,” she said.

She pointed to Iran's development of ballistic missiles and support for proxies in Yemen, Syria, Lebanon and Iraq, saying that “the United States will continue to hold Iran accountable, even if it means we must act alone.”

“What makes America special is that we are unafraid to stand up for what is right,” Craft said. “And I don’t need a cheering section to validate my moral compass.”

Iranian Foreign Minister Mohammad Javad Zarif said the U.S. deployment of nearly 50,000 troops in the Persian Gulf in 29 military installations, with more than 300 combat aircraft, and its hundreds of billions of dollars of arms sales “have enhanced neither the security of the external powers, nor of the region.”

“We need collective efforts by regional countries to establish inclusive dialogue and security networking in this region,” he said. “Otherwise, we will all be engulfed in turmoil for generations to come.”

Lavrov reiterated Russian President Vladimir Putin’s initiative to hold an online meeting of leaders of the five permanent Security Council members — the U.S., Russia, China, Britain and France — along with Germany to discuss ways to bring peace to the region.

“Dialogue will not be smooth sailing nor will it reach its goal overnight,” he said. “But no matter how long the journey might be, step by step we’ll eventually reach the destination. The first step for dialogue, even a small one, will be one giant step toward peace.”