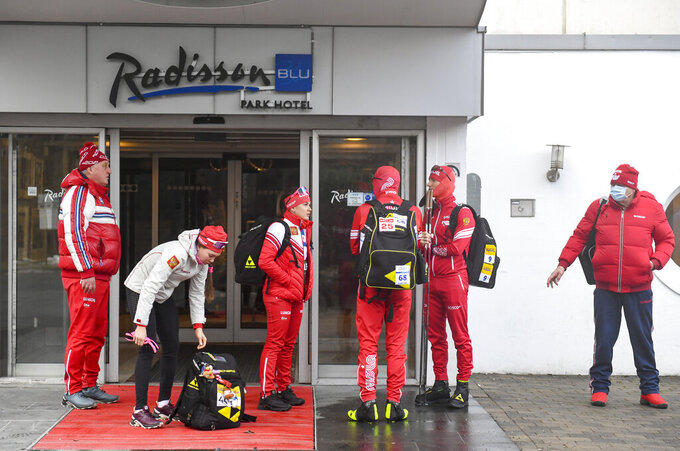 Members of the Russian cross-country ski national team stand outside the Radisson Blu Hotel at Fornebu, Oslo, Tuesday March 1, 2022. Norway challenged a decision by the International Ski Federation to allow Russians to keep competing, and said it would block them from upcoming rounds of the World Cup that Norway hosts this week. (Annika Byrde/NTB scanpix via AP)

LAUSANNE, Switzerland (AP) — Russian athletes have been excluded from yet another sport that is extremely popular at home following the country’s invasion of Ukraine.

Russia was banned from competing in international ice skating events on Tuesday, a day after being kicked out of soccer competitions and hockey — Vladimir Putin’s favorite sport. The decisions follow the International Olympic Committee’s request to keep Russian athletes out of sporting events around the world.

The International Skating Union, the body that runs the sport around the world, said no athletes from Russia or Belarus “shall be invited or allowed to participate” in events until further notice.

“The ISU Council reiterates its solidarity with all those affected by the conflict in Ukraine and our thoughts are with the entire Ukrainian people and country,” the ISU said in a statement.

Belarus has been a key ally of Russia in its attack on Ukraine.

The world figure skating championships are scheduled for later this month in Montpellier, France. The ISU decision means Olympic champion Anna Shcherbakova and 15-year-old teammate Kamila Valieva, who was the focus of a still-unresolved doping dispute at last month’s Winter Olympics, will be excluded from the competition.

Also Tuesday, the International Volleyball Federation said it had stripped Russia of hosting the men’s world championships in August and September and would seek another host country or countries.

“It would be impossible to prepare and stage the World Championships in Russia due to the war in Ukraine,” the FIVB board said.

The sport of swimming, however, has so far chosen to ignore the recommendation from the IOC to ban Russians. The sport’s governing body, known as FINA, said Tuesday it would allow Russian and Belarusian swimmers to take part “as neutrals, competing under the FINA flag and with the FINA anthem.”

The swimming body, however, said it had withdrawn a federation honor awarded to Putin in 2014.

The International Ski Federation has also decided to allow Russians to continue to compete, but the Norwegian Ski Federation said Tuesday it would block Russians from competing in upcoming World Cup events in its country.

“We had hoped that FIS would reach the same conclusion on behalf of all ski nations, but now the Norwegian Ski Federation can no longer wait. The executive board has therefore today decided to notify FIS that Russian and Belarusian athletes will not be allowed to participate in the upcoming events in Norway,” Norwegian Ski Federation president Erik Roste said.

It’s unclear if Russian track athletes will be allowed to compete at the world indoor championships this month in Serbia. The country remains suspended from the sport for doping but many Russians compete as “neutral athletes” without a flag or national emblems.