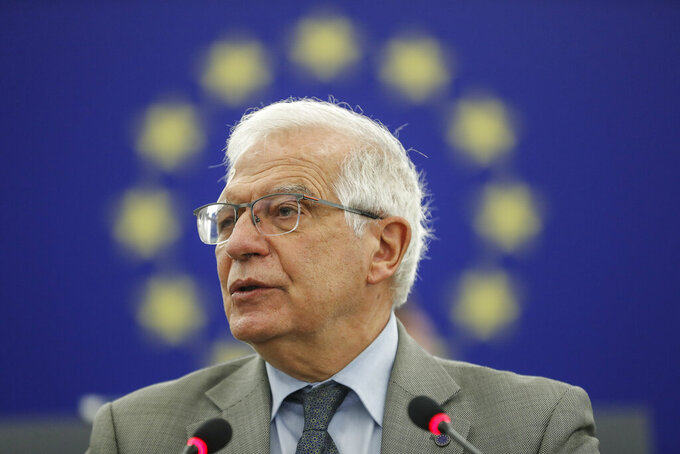 Josep Borrell Fontelles vice president of the European Commission in charge of coordinating the external action of the European Union, delivers his speech about the Systematic repression in Belarus and its consequences for European security following abductions from an EU civilian plane intercepted by Belarusian authorities. Strasbourg eastern France, Tuesday 8 june , 2021. (Jean-François Badias / Pool via AP)

UNITED NATIONS (AP) — Russia sparred with the European Union and the United States at a U.N. meeting Thursday that highlighted the strained relations between Moscow, Brussels and Washington.

Estonia, which holds the Security Council presidency this month, organized the meeting to focus on cooperation between the United Nations and the 27-nation European Union, inviting its foreign policy chief Josep Borrell to speak about the relationship and challenges to peace and security.

The council meeting came just ahead of this weekend’s summit of the Group of Seven major industrialized nations — which Russia was ousted from in 2014 — and next week’s first meeting between U.S. President Joe Biden and Russia’s President Vladimir Putin, which comes as relations between Washington and Moscow have sunk to a post-Cold War low.

Borrell told the council in a virtual address that the COVID-19 pandemic “has underscored the fragility of our hyper-globalized and interdependent world.”

“The demand for multilateral solutions is much greater than the supply,” he said, pointing to “more divisions, more free-riding and more distrust than the world can afford.”

“We need global cooperation based on agreed rules because the alternative is the law of the jungle, where problems don’t get solved,” he said. “Every day we see the cost of the absence of multilateral action in reduced access to vaccines and insufficient climate action, and peace and security crises that fester.”

Borrell blamed “the rise in power politics and ideological contests” that erode trust, stressing the EU’s commitment to the U.N. and to “rules-based multilateralism.” He said there must be pushback against “selective and self-serving approaches to multilateralism.”

“True multilateralism entails consistent support for the central role of the United Nations,” he said. “Promoting dubious concepts like the `rules-based order’ or imposing bloc approaches and attempts to present one’s own experience and achievements as a golden standard which other countries should implement back at home -- all of it bears no resemblance to multilateralism and often leads to blatant interference in the affairs of other states.”

Unfortunately, Polyansky said, EU-Russian relations “are currently at the lowest ebb in history.”

He warned the European bloc against interfering in other countries’ affairs including by taking action against Belarus, a close Moscow ally.

Borrell sharply criticized the “massive repression of peaceful protesters” after last August’s presidential elections in Belarus, which were widely seen as rigged, and the recent “major attack on air safety,” when a civilian aircraft was diverted to its capital and a prominent journalist and his girlfriend were taken off and arrested.

The EU’s chief diplomat said the bloc has closed its airspace to Belarus airlines and is in the process of adopting a new package of economic sanctions.

Borrell also alluded to sharp differences with Moscow over Syria, where its close ally Russia holds the key to continued cross-border delivery of humanitarian aid to millions in need, and in Ukraine, where Borrell called Russia “a party to the conflict” in the east and urged Moscow “to take a constructive stance” to implement the Minsk peace plan.

Elsewhere, Polyansky questioned the EU’s naval operation in the Mediterranean to implement the U.N. arms embargo on Libya, urging it “to tread very carefully in this region.” He said Russia also believes the EU “can do better as a mediator” between Kosovo and Serbia, which has close ties to Moscow. Kosovo declared independence from Serbia in 2008, a decade after a brutal war between separatist ethnic Albanian rebels and Serb forces.

Polyansyky warned the EU that it intends “to more adamantly and uncompromisingly fight” against what he said was the bloc's promotion of its own approaches on gender, human rights, climate and other topics in U.N. documents “as allegedly universal and consensus-based.”

U.S. political coordinator Rodney Hunter affirmed the U.S.-EU partnership, saying it is built on shared values and the pursuit of trans-Atlantic prosperity and security. He also “unequivocally” affirmed the EU’s role as “a crucial partner to the United Nations,” particularly in the Security Council’s efforts to maintain peace and security in the world.

At the same time, Hunter was sharply critical of Russia, saying its actions in Ukraine including the occupation of Crimea, remain “a threat to European security.” He stressed U.S. and EU “unwavering” support for the sovereignty and territorial integrity of Ukraine and of Georgia, where Russian forces occupy the Abkhazia and South Ossetia regions.

“We will continue to stand with our allies and partners in calling on Russia to immediately cease its evolving military, economic, diplomatic and disinformation efforts to destabilize Ukraine and Georgia,” Hunter said, adding that the U.S. also supports EU actions against Belarus.

Polyansky ended his remarks saying he didn’t want everyone to think that “Russia has a negative attitude to the EU.” This isn’t the case, he said, pointing to the EU's role coordinating meetings of parties to the 2015 nuclear deal between Iran and six major powers, which “we highly value.”

Borrell said the EU is working non-stop and making progress on getting the United States back in the nuclear deal, sanctions lifted against Iran, and a return to the agreement’s limits on Iran’s nuclear activities.

“Negotiations are intense and slow on a number of issues, including on the precise sequencing of steps,” he said. “There’s still a lot of work to be done.”

Polyansky said there are other areas in addition to the Iran nuclear deal where Russia and the EU cooperate successfully.

“Most importantly, the EU should understand that there is no place for hegemony and dominance in the modern world,” he said.