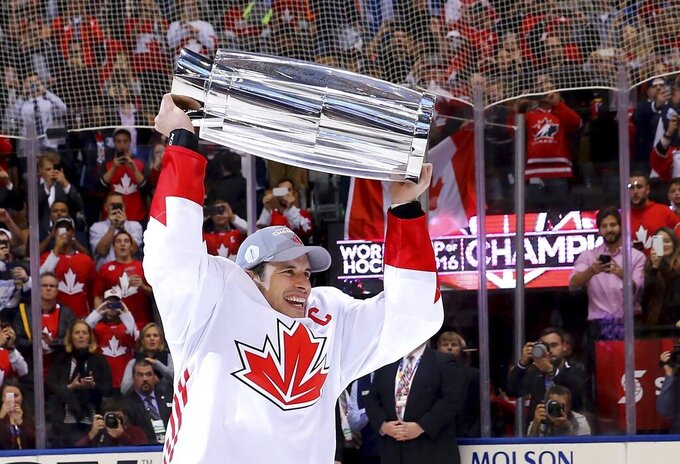 FILE- Canada's Sidney Crosby hoists the trophy following his team's victory over Europe in the finals of the World Cup of Hockey finals on Sept. 29, 2016, in Toronto. he NHL and NHL Players’ Association have abandoned plans to hold a World Cup of Hockey in 2024, according to a a joint statement Friday, Nov. 11, 2022, calling it not feasible to hold the tournament as they had hoped in February of 2024. The league and union say they hope to stage it in February 2025 and will continue to plan for that. (Bruce Bennett/Pool Photo via AP, File)

Russia's war in Ukraine has derailed plans to hold a World Cup of Hockey this winter.

The NHL and NHL Players' Association on Friday abandoned plans to stage a World Cup in February 2024 as they had hoped, saying in a joint statement “iit is not feasible" in the current environment.

There is uncertainty about what to do with players from Russia since the country's invasion of Ukraine earlier this year and the ongoing war there. Some countries did not want Russians to participate, even if under a different name and without national team uniforms as was done at recent Olympics as a punishment for state-sponsored doping.

“Disappointment or not, you want peace in the world,” Swedish defenseman Victor Hedman of the Tampa Bay Lightning said. “That’s the bottom line.”

Players want the best in the world to take part — a group that would include a number of Russians — and that created an impasse with time running out to pull a World Cup together.

“The conflict in the Ukraine makes it difficult to deal with the Russian issue, and we’ve certainly heard from some of the participating countries or countries who would participate would have objections to Russian participation in the World Cup,” Deputy Commissioner Bill Daly said last month. “Obviously (it is) something that’s relevant and we’d take into consideration in connection with making decisions.”

The league and union said they hope to stage the event in February 2025 and will continue to plan for that. The delay buys the league and players time to figure things out.

The World Cup is a showcase for hockey in non-Olympic years but it hasn’t been held since 2016 and the NHL’s participation in the Olympics has also been spotty. The world championships have been reliably held in the meantime but often overlaps with the NHL playoffs and thus does not include some of the world’s top players.

Unlike soccer, which banned Russia from its World Cup because of the country’s invasion of Ukraine, many of hockey’s best players are from there and the impact would be much greater. No Russian participation would have meant the likes of Alex Ovechkin, Evgeni Malkin, Andrei Vasilevskiy and Nikita Kucherov being left out.

“You obviously always want to represent your country and to make your Russian fans happy,” Vasilevskiy, a two-time Stanley Cup-winning goaltender with Tampa Bay, said recently. “I’m not sure what’s going to happen next. It’s a little complicated now. I mean, I hope we’ll be able to to play there as Team Russia, because now we have lots of good, talented young hockey players from Russia. And it’ll be really interesting to play together.”

Americans Patrick Kane and Auston Matthews and Canadians Sidney Crosby and Connor McDavid have not gotten to play together internationally against all the world's best since there has not been a World Cup in six years and the NHL did not go to the past two Olympics.

Commissioner Gary Bettman foreshadowed the decision at the league's board of governors meeting Oct. 18, saying the deadline was approaching to nail down plans. There were other hurdles, such as cooperation with the International Ice Hockey Federation and national federations over hosting games in Europe, but the league and players were confident they could do the tournament themselves, if needed.

Two months ago, when it looked likely the World Cup would indeed happen, U.S. star Jack Eichel said, “Don't hold your breath" in a skeptical tone that turned out to be warranted.

“We’re trying to grow hockey globally,” Eichel said. “Whether it’s representing your country or having the opportunity to play against the world’s best, everyone wants to do it. I think it’s something that fans want to see. I think it’s great for our game.”

There is optimism about 2025 and extra time could allow for a qualifying tournament to decide who joins the obvious teams: the U.S., Canada, Sweden, Finland and the Czech Republic — and perhaps Russia, depending on the global climate.

The 2016 World Cup closely followed the 2014 Olympics in Sochi. The NHL chose to skip the 2018 Olympics and planned to participate in 2022 in China before the pandemic caused enough schedule disruption to derail those hopes.

The NHL has committed to sending players to the 2026 Winter Olympics in Milan and Cortina.

“The one thing I want to play is the Olympics and you just look right now and that’s on track still.,” Hedman said. “You want to be in these tournaments where it’s best on best, but it’s going to take a little longer.”