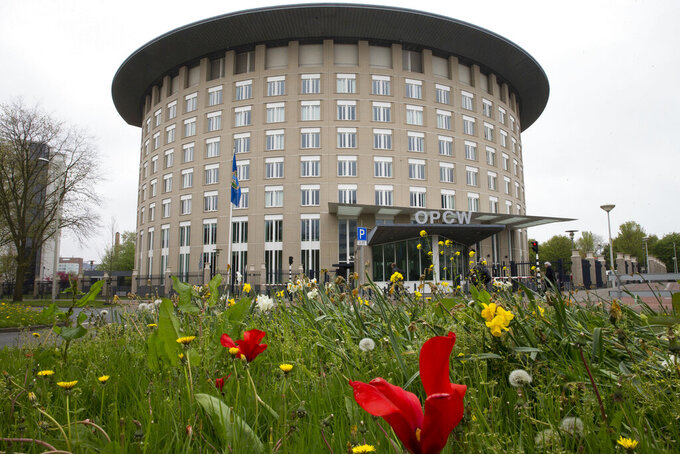 -FILE- In this Friday, April 21, 2017, image the headquarters of the Organisation for the Prohibition of Chemical Weapons, OPCW, are seen in The Hague, Netherlands. Russia came under renewed pressure to explain the nerve agent attack on opposition figure Alexei Navalny as the annual meeting of the global chemical weapons watchdog got underway Monday Nov. 30, 2020, amid measures aimed at reining in the spread of the coronavirus. (AP Photo/Peter Dejong)

THE HAGUE, Netherlands (AP) — Russia came under renewed pressure Monday to explain the nerve agent attack on opposition figure Alexei Navalny as the annual meeting of the global chemical weapons watchdog got underway amid measures aimed at reining in the spread of coronavirus.

Navalny fell ill on Aug. 20 during a domestic flight in Russia, and was flown to Germany for treatment two days later. His allies accused the Kremlin of poisoning its fiercest opponent. Tests carried out by labs in Germany, France and Sweden and by the Organization for the Prohibition of Chemical Weapons established that Navalny was exposed to a Soviet-era Novichok nerve agent.

The organization's director-general, Fernando Arias, told Monday's meeting that according to the Chemical Weapons Convention, “the poisoning of an individual through the use of a nerve agent is a use of a chemical weapon.”

A group of 56 nations issued a statement as the start of the annual meeting of the OPCW's member states urging Moscow to disclose “in a swift and transparent manner the circumstances of this chemical weapons attack.”

Russia, which denies involvement in Navalny's poisoning, reacted bullishly in its written statement to the conference.

“Instead of trying to look into what had happened, Germany and its allies resorted to megaphone diplomacy, unleashed a mass disinformation campaign against Russia and started to demand some ‘independent international investigation’ under the auspices of the OPCW,” Moscow's statement said.

In October, Moscow asked for OPCW experts to visit Russia to provide “technical assistance” in its investigations. Arias said talks are underway to define “all the legal, technical, operational and logistical parameters in order for this visit to take place.”

The European Union has imposed sanctions on six Russian officials and a state research institute over the poisoning. Moscow responded earlier this month by announcing that it had adopted sanctions against a number of German and French officials.

The OPCW's annual meeting has been broken into two parts amid the coronavirus pandemic. Two days of talks this week will focus on approving the proposed 71.74 million euro ($86 million) annual budget for 2021. The second half of the meeting will take place next year.