Russians hold off Norway and France for Olympic relay gold 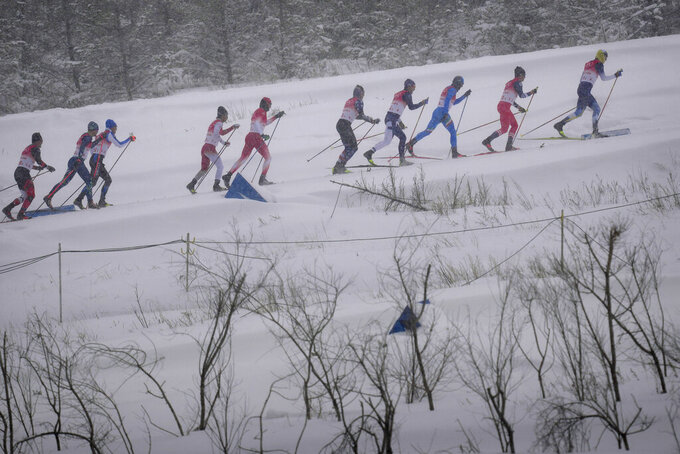 ZHANGJIAKOU, China (AP) — Slowed by the snow, waylaid by the wind, wrapped up by the Russians.

The buildup of natural snow on the cross-country course combined with the strong wind made it tough for the skiers competing in the men’s 10-kilometer relay on Sunday at the Beijing Olympics.

The Russians, just like their gold medal-winning women’s team from a day earlier, opened up a lead on the first leg and then held on for victory.

But their time of 1 hour, 54 minutes, 50.7 seconds over the four legs was more than 20 minutes slower than the winners from four years ago at the 2018 Pyeongchang Games.

“Today everything aligned. Everything was super,” said Alexey Chervotkin, who skied the first leg for the Russians and opened that all-important gap. “The weather seemed to be hard and there was snow but it was in our favor so everything was great.”

Sergey Ustiugov skied the final leg, pulling away from Johannes Hoesflot Klaebo of Norway and Maurice Manificat of France and embracing his teammates after crossing the finish line. Klaebo edged Manificat for the silver, 1:07.2 behind the winners. France took third, 1:16.4 behind the Russians.

The snowy conditions made the ski tracks slow, especially on the first two classic ski legs. Leaf-blowers were used to clear out the excess snow.

“The course was tough before and with the snow and wind today, it was even tougher,” said Paal Golberg, who skied the second leg for Norway. “The four Russian guys were better so just take the hat off to them and try to be satisfied with the silver.”

Norway’s winning time in the four-man relay at the Pyeongchang Games was 1:33:04.9. The Russian team was second in 2018 and France again earned bronze.

Emil Iversen, who skied their first leg for Norway on Sunday, said he knew what the Russians were capable of.

“I knew that I needed to stay with them, but I wasn’t strong enough so it’s a bad start for the relay when I end up second to them. It’s hard to take it back,” Iversen said. “But I tried my best. We have to be happy with silver. It’s also a good result.”

Chervotkin led off for the Russians, with Alexander Bolshunov skiing the second classic leg. Denis Spitsov and Ustiugov raced the two freestyle legs. All four are in the top 12 of the overall World Cup standings.

Bolshunov finished his second leg in 59:56 and had about a minute lead over Norway, Sweden, Finland, France and Germany.

That five-man chase group stayed about 50 seconds behind Spitsov until Finland fell off the pace. When Spitsov handed off to Ustiugov, Klaebo was 44.9 seconds behind.

On the last lap, Russia held a lead of 1:04 over France and Norway, with Sweden 1:28 behind. The Swedes finished fourth.

The Norwegian team of Iversen, Golberg, Hans Chister Holund and Klaebo won gold last year in the relay at the world championships in Germany.

The four-man relay began as a mass-start with 15 racers. Each athlete skied three laps on a 3.3-kilometer (2-mile) course.