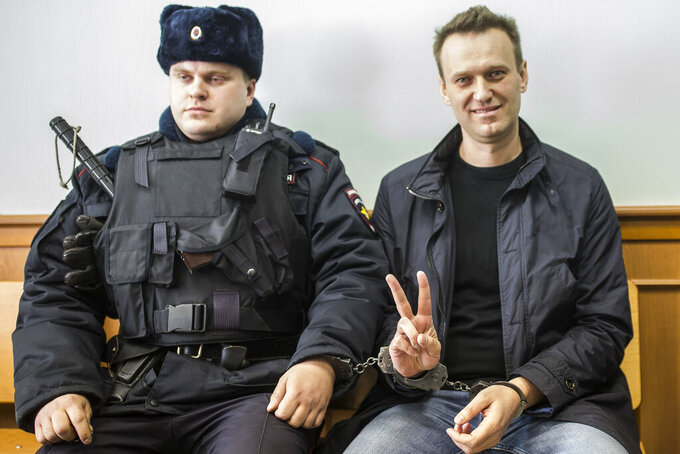 FILE - In this file photo taken on Thursday, March 30, 2017, Russian opposition leader Alexei Navalny, right, shows a V-sign for the media in court in Moscow, Russia. Russian opposition politician Alexei Navalny is in a coma and on a ventilator in an intensive care unit in Siberia after falling ill from suspected poisoning that his allies believe is linked to his political activity. (AP Photo/Evgeny Feldman, File) 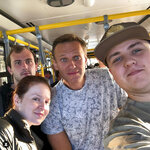 MOSCOW (AP) — Russian opposition leader Alexei Navalny, one of Vladimir Putin’s fiercest critics, lay in a coma Friday at a Siberian hospital, the victim of what his allies said appeared to be a poisoning engineered by the Kremlin.

Navalny's organization was scrambling to make arrangements to transfer him to Germany for treatment; a German group said it was ready to send a plane for him and that a noted hospital in Berlin was ready to treat him.

The 44-year-old Navalny fell ill on a flight back to Moscow from the Siberian city of Tomsk on Thursday and was taken to a hospital after the plane made an emergency landing in Omsk, Navalny's spokeswoman, Kira Yarmysh, said on Twitter.

She told the Echo Moskvy radio station that he must have consumed poison in tea he drank at an airport cafe before boarding the plane early Thursday. During the flight, Navalny started sweating and asked her to talk to him so that he could “focus on the sound of a voice." He then went to the bathroom and lost consciousness, and has been in a coma and on a ventilator in grave condition ever since.

In a video statement released early Friday in Omsk, Yarmysh said Navalny remained in critical condition and she called on the hospital's leadership “not to obstruct us from providing all necessary documents for his transfer.” It was not clear what the possible obstructions could be.

Other opposition figures were quick to suggest Kremlin involvement.

“We are sure that the only people that have the capability to target Navalny or myself are Russian security services with definite clearance from Russia’s political leadership,” Pyotr Verzilov, a member of the protest group Pussy Riot who ended up in intensive care after suspected poisoning in 2018, told The Associated Press. “We believe that Putin definitely is a person who gives that go-ahead in this situation.”

Jaka Bizilj of the German organization Cinema For Peace, which arranged for Verzilov's treatment in Germany, said that at Verzilov's request “we will send at midnight an air ambulance with medical equipment and specialists with which Navalny can be brought to Germany.”

Doctors at Omsk Ambulance Hospital No. 1, where the politician was being treated, remained tight-lipped about his diagnosis saying only that they were considering a variety of theories, including poisoning. Local health officials said they found no indication that Navalny had suffered from a heart attack, stroke or the coronavirus.

Authorities initially refused to let Navalny’s wife, Yulia, see her husband and have rejected requests for documentation that would allow him to be transferred to a European hospital for treatment, Yarmysh said.

Verzilov, who was flown to Berlin for treatment in 2018, said hospitals in Omsk or Moscow would not be able to treat Navalny properly and expressed concern about possible pressure from security services that doctors could be under in Russia.

Kremlin spokesman Dmitry Peskov said it was necessary to wait for test results showing what caused Navalny's condition, adding the authorities would consider a request to allow Navalny to leave Russia, which has not fully opened its borders after a coronavirus lockdown, for treatment.

Reports about the alleged poisoning made waves in the West.

French President Emmanuel Macron said France was ready to offer Navalny and his family “all necessary assistance ... in terms of health care, asylum, protection" and insisted on the need to clarify what happened.

German Chancellor Angela Merkel, speaking at a joint news conference with Macron, echoed that sentiment. “What is very important is that it will be clarified very urgently how it could come to the situation."

British Foreign Secretary Dominic Raab and the United Nations also expressed concern over what happened to Navalny, and Amnesty International demanded a full and thorough investigation.

The widow of Alexander Litvinenko, the Russian agent who was killed in London by radioactive poisoning in 2006, voiced concern that Navalny’s enemies within Russia may have decided that it’s time to use a “new tactic.”

“Maybe they decided ... not to stop him just with an arrest but to stop him with poison. It looks like a new tactic against Navalny,” Marina Litvinenko told The Associated Press from Sicily, Italy.

Like many other opposition politicians in Russia, Navalny has been frequently detained by law enforcement and harassed by pro-Kremlin groups. In 2017, he was attacked by several men who threw antiseptic in his face, damaging an eye.

Last year, Navalny was rushed to a hospital from prison, where he was serving a sentence following an administrative arrest, with what his team said was suspected poisoning. Doctors said he had a severe allergic attack and discharged him back to prison the following day.

Navalny's Foundation for Fighting Corruption has been exposing graft among government officials, including some at the highest level. Last month, he had to shut the foundation after a financially devastating lawsuit from Yevgeny Prigozhin, a businessman with close ties to the Kremlin.

Belarus' authoritarian President Alexander Lukashenko accused Navalny last week of organizing unprecedented mass protests against his re-election that have rocked Russia's ex-Soviet neighbor since Aug. 9. He did not, however, provide any evidence and that claim was one of many blaming foreign forces for the unrest.

The most prominent member of Russia's opposition, Navalny campaigned to challenge Putin in the 2018 presidential election, but was barred from running.

He set up campaign offices across Russia and has been promoting opposition candidates in regional elections, challenging members of Russia's ruling party, United Russia. One of his associates in Khabarovsk, a city in Russia's Far East that has been engulfed in mass protests against the arrest of the region's governor, was detained last week after calling for a strike at a rally.

In the interview with Echo Moskvy, Yarmysh said she believed the suspected poisoning was connected to this year's regional election campaign.

Commentators say Navalny has become increasingly dangerous for the Kremlin as Putin’s approval rating has plummeted to a record low of around 60% amid the coronavirus pandemic and growing public frustration with the declining economy.

“The Duma elections are particularly important for the Kremlin,” as the new Duma will be operating in 2024, when Putin’s current presidential term expires and he may announce running for re-election, Gallyamov told the AP.

"That’s why controlling the next State Duma is crucially important for the Kremlin. Navalny really makes it harder for the Kremlin to establish that control,” Gallyamov added.

At the same time Navalny, who rose to prominence by exposing corruption all over Russia, could have other enemies, Gallyamov said, and may have been targeted by people featured in one of his investigations, if he was indeed deliberately poisoned.

Navalny is not the first opposition figure to come down with a mysterious poisoning.

Verzilov, who spent a month in a hospital recovering from his suspected 2018 poisoning, told the AP that Navalny's initial symptoms — loss of coordination, pain, fainting — were very similar to his.

Opposition activist Vladimir Kara-Murza was hospitalized with poisoning symptoms twice — in 2015 and 2017. Prominent journalist Anna Politkovskaya was also reportedly poisoned in 2004 — two years before being murdered.

On Thursday evening, activists in several Russian cities held protests in support of Navalny. In St. Petersburg, a crowd of about 100 people gathered in the city center, and several supporters were detained.

“It was actually in the interests of the authorities to safeguard him," Yegor Batozhok, 34, a municipal deputy in St. Petersburg, told the AP. “But for some reason a number of those who criticize the authorities get poisoned."