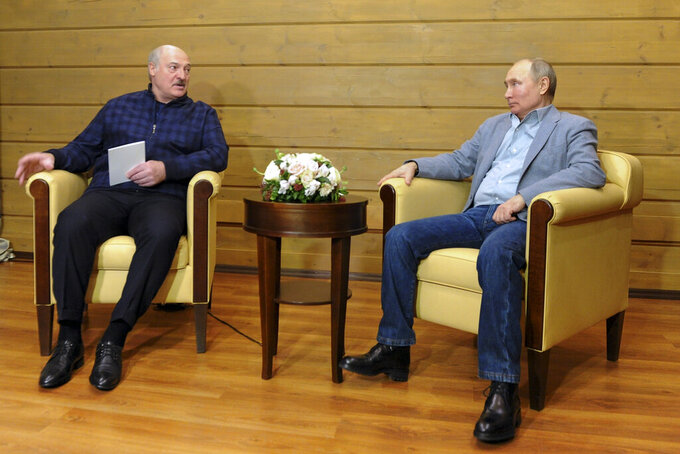 MOSCOW (AP) — Russian President Vladimir Putin hosted his Belarusian counterpart Alexander Lukashenko for talks on Monday, amid media reports suggesting that the leader of Belarus was coming to Russia to secure another loan.

The Kremlin extended both economical and political support to Lukashenko after his disputed re-election in August triggered the largest and the most sustained wave of mass protests in Belarus' history. In September, Putin said Moscow would provide a $1.5 billion loan to its ex-Soviet neighbor.

Earlier this month, the Kommersant newspaper cited government sources saying that another loan, this time of over $3 billion, would be discussed during Lukashenko's visit to Russia. The Belarusian leader denied the reports last week and said he was “not going there to ask for anything.”

The two leaders met in Russia's Black Sea resort of Sochi. In brief remarks before the start of their talks, they highlighted the close economic and cultural ties between the two countries.

Putin pointed out that Russia remains the biggest trade and economic partner for Belarus. Lukashenko thanked Moscow for its economic support, adding that the funds invested in the Belarusian economy were well spent.

Lukashenko also praised the Russian coronavirus vaccine Spuntik V, the first batch of which arrived to Belarus in December after the ex-Soviet nation became the second country besides Russia to give the shot regulatory approval. He said production of Sputnik V will begin in Belarus in March, and added that Belarus will develop its own coronavirus vaccine by the fall.

Russia and Belarus have a union treaty envisaging close political, economic and military ties, but they have often engaged in acrimonious disputes. Before the Aug. 9 election in Belarus, Lukashenko repeatedly accused the Kremlin of pressing Belarus to abandon its independence.

But with the U.S. and the EU criticizing the Belarus presidential election and imposing sanctions on Belarus, Lukashenko has had to rely squarely on Russia’s support.

Despite frictions in the past, the Kremlin abhorred the prospect of public protests forcing the resignation of the Belarusian leader, fearing it could embolden Putin’s critics at home.