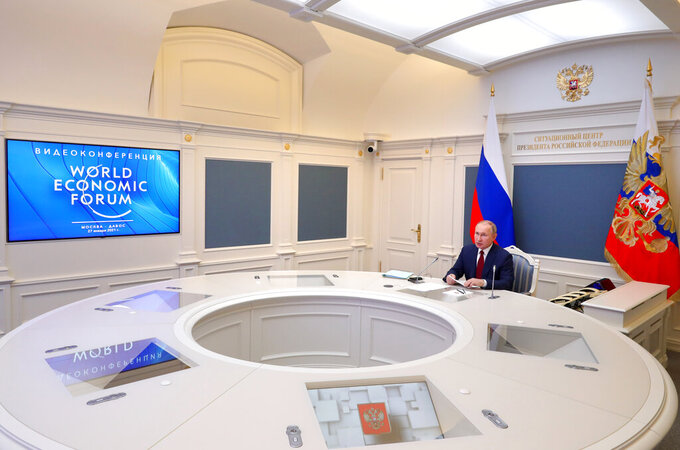 Speaking by video link during a virtual meeting of the World Economic Forum, Putin pointed at growing inequality and unemployment and a rise of populism as potential triggers for new conflicts that he said could plunge the world into a “dark anti-Utopia.”

“The pandemic has exacerbated the problems and disbalances that have been accumulating,” the Russian leader said. “International institutions are weakening, regional conflicts are multiplying and the global security is degrading.”

Putin hailed the decision by Russia and the United States to extend their last nuclear arms control pact as a positive move, but he added that spiraling tensions have come to resemble the situation before World War II.

“I strongly hope that such ‘hot’ global conflict is impossible now. It would mean the end of civilization," he said. “But the situation may become unpredictable and spin out of control. There is a real danger that we will face a downturn in global development fraught with an all-out fight, attempts to solve contradictions by searching for internal and foreign enemies, and the destruction of basic traditional values.”

Putin attributed the worsening economic situation to a Western liberal economic model that he said “foments social, racial and ethnic intolerance with tensions erupting even in countries with seemingly long-established civil and democratic institutions.”

The Russian leader pointed to what he described as the negative role of technology companies that run top social networks, charging that they have abused their position and tried to “control the society, replace legitimate democratic institutions and usurp an individual's right to decide how to live and what views to express.”

“We have seen it all in the United States,” Putin said without elaborating.

Putin also claimed that there has been " increasingly aggressive pressure on those countries that disagree with a role of obedient satellites, the use of trade barriers, illegitimate sanctions, restrictions in the financial, technological and information spheres.”

Relations between Russia and the West have sunk to post-Cold War lows after Moscow's annexation of Ukraine's Crimea in 2014, Russia's meddling in the U.S. elections and recently, the poisoning and the subsequent arrest of Russian opposition leader Alexei Navalny.

“The era marked by attempts to create a centralized unipolar global order is over now,” Putin said in an apparent reference to the perceived global domination of the U.S.