Ruthless Man City sweeps aside Gladbach, back in CL quarters 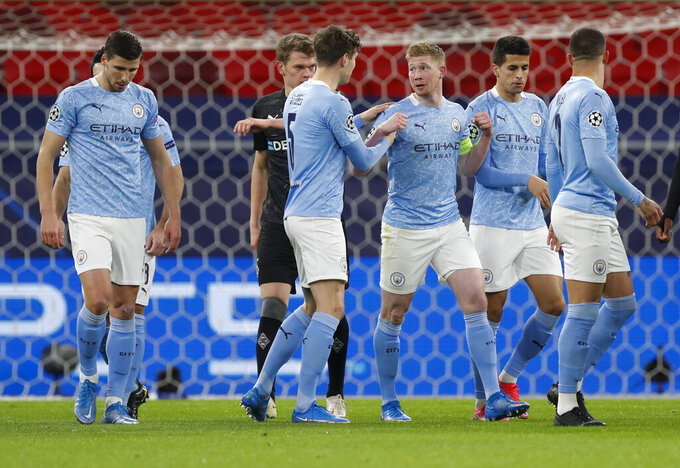 BUDAPEST, Hungary (AP) — The quarterfinals have proved to be the ceiling for Manchester City in the Champions League under Pep Guardiola.

The team is back there again, for a fourth straight season, after sweeping aside Borussia Monchengladbach in the last 16.

The ruthless nature of City’s 4-0 aggregate win over Gladbach, sealed by another 2-0 victory over the German team in the second leg on Tuesday, smacked of a side in control of its destiny.

The celebrations at the full-time whistle were as business-like as the performance. For City, it felt the competition now starts for real.

“Since the first day I arrived here, five years ago, they told me you have to win the Champions League,” Guardiola said. “So it’s always on our shoulders.”

Yet the expectations have proved too much for Guardiola and his team in successive quarterfinal exits, to Liverpool, Tottenham and then — so painfully — Lyon last season.

This looks to be City’s best chance of becoming European champion for the first time, though.

Thanks to a blistering 12th-minute strike in off the crossbar by Kevin De Bruyne and Ilkay Gundogan’s goal six minutes later after a flowing team move, City racked up a 24th win in its last 25 games in all competitions and a seventh straight clean sheet in the Champions League.

The squad is injury-free. Guardiola has been able to rest and rotate his players. City leads the Premier League by 14 points, is into the final of the English League Cup, and now the quarterfinals of both the FA Cup and the Champions League.

In an intense season like no other because of the pandemic, City couldn’t be in better shape. Not that Guardiola is getting carried away.

“Everything,” he said, “can change immediately in one day.”

Certainly Gladbach was in no condition to bring City down, a seventh defeat in a row in all competitions on the cards from the moment De Bruyne met a short pass from Riyad Mahrez with a left-foot shot from the edge of the area that flew in off the underside of the crossbar.

It could have been a heavier loss for Gladbach inside an empty Puskas Arena in Budapest, which again was hosting the match because coronavirus travel restrictions prevented the team from traveling to Manchester for the return leg.

After Gundogan ran onto a reverse pass from Phil Foden and slipped in the second, City picked its moments to pick off Gladbach. Mahrez was twice denied by goalkeeper Yann Sommer in the second half and also curled wide when well-placed, while substitute Raheem Sterling stumbled after being played in by De Bruyne.

“We have to recognize the opponent was too strong for us tonight,” said Gladbach coach Marco Rose, whose team has lost every match since it was announced on Feb. 15 that he would be leaving at the end of the season to join Borussia Dortmund.

Gladbach bade farewell to the Champions League and the team is unlikely to return to the competition for at least a year and a half, having dropped to 10th place in the Bundesliga on the back of its woeful recent run.

City, though, marches on and was joined in the last eight on Tuesday by Real Madrid, which beat Atalanta 3-1 to complete a 4-1 win on aggregate.

No team will want to face City next, even with the team's history of imploding at this stage.

“I’m not thinking to get to the semifinals,” Guardiola said. "I’m thinking do a good first game and after that, the second game. That’s the only thing.

“When you are thinking about what you are going to win, you forget what you have to do.”