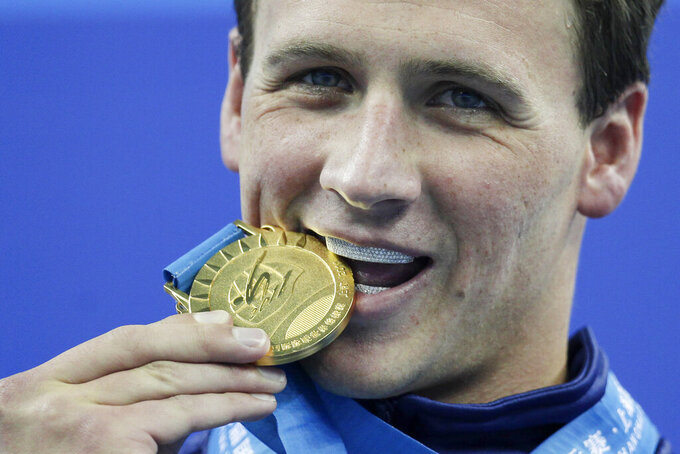 FILE - Ryan Lochte, of the United States, bites his gold medal for the men's 200 meters freestyle at the FINA Swimming World Championships in Shanghai, China, on July 26, 2011. Ryan Lochte told The Associated Press by phone Sunday, July 3, 2022, that he is auctioning off all of his Olympic silver and bronze medals, with the proceeds going to a charity benefitting children. The 37-year-old swimmer earned 12 medals over four Olympics, including six gold that he plans to keep for now. (AP Photo/Michael Sohn, File)

All of Ryan Lochte's Olympic silver and bronze medals are up for auction, with the proceeds going to a charity benefitting children.

The 37-year-old swimmer earned 12 medals over four Olympics, including six gold that he plans to keep for now.

“I’m not one to be all sentimental about medals,” Lochte told The Associated Press by phone Sunday from a Mexican vacation. “My medals are just sitting in my closet collecting dust. The memories that I have is what means the most.”

The medals are being sold in three lots by Boston-based RR Auction. The sale ends July 21.

The first lot is Lochte’s first individual Olympic medal, a silver in the 200-meter individual medley from the 2004 Athens Games in which Michael Phelps won gold. It has an estimate of $10,000 or more.

Bobby Livingston, executive vice president of RR Auction, said the medals were consigned by a person who received them from Lochte and wishes to remain anonymous.

“They’re in perfect condition. They have beautiful ribbons,” Livingston said. “Ryan’s are obviously extremely interesting to people who collect medals.”

Lochte confirmed he is not the direct seller.

“I gave them to a third party,” he said. “Everything we earn is going straight to the charity.”

Also for sale is a 14k white gold Olympic ring and a Breitling watch with black diamonds. Lochte bought both items for himself after the London Games.

His selected charity is Jorge Nation Foundation, a non-profit that raises money to send children with a terminal illness and their families on a dream trip from South Florida to a destination of their choice. Lochte said he’s worked with the foundation for over 10 years. His agent is on its board of directors.

“This year I really wanted to focus on giving back. I’m loving it,” he said. “I’ve been teaming with my dad doing swim clinics and I’m coming out with my own sunscreen.”

During his career, Lochte routinely gave away his medals from national competitions to kids in the crowd.

Lochte hasn't competed at a major meet since last year's U.S. Olympic trials. He didn't make the team for Tokyo. Last month, he raced in an ocean swim in the Cayman Islands and finished 14th.

“One mile in the ocean is a lot different than in the pool,” he said. “I swear I thought I was going to have a heart attack.”

He's contemplating shedding some of his six golds in the future. He wants to keep his first individual gold from the 200 back in Beijing and another for his dad, Steve.

“Those medals mean a lot to me, I worked my (rear) off for them,” Lochte said, “but helping other people out is more important to me, especially because I have kids of my own."

Lochte's 12 medals are tied for second-most among swimmers, trailing only Phelps' Olympic record of 28.