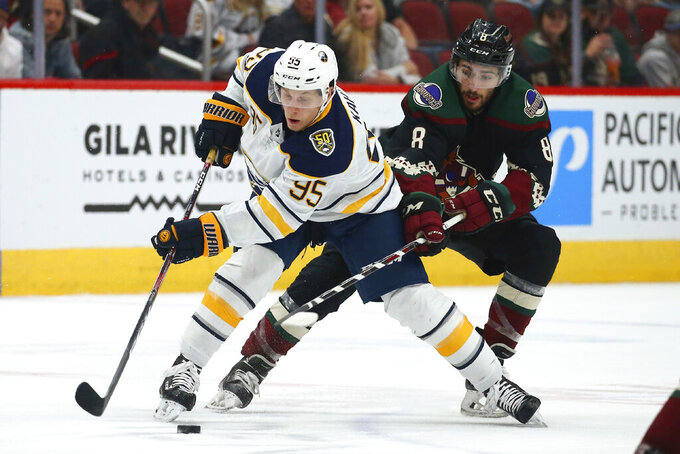 FILE - In this Feb. 29, 2020, file photo, Buffalo Sabres center Dominik Kahun (95) tries to keep the puck away from Arizona Coyotes center Nick Schmaltz (8) during an NHL hockey game in Glendale, Ariz. Kahun is eligible to become an unrestricted free agent after the Sabres chose not to issue a qualifying offer to retain his rights by an NHL deadline Wednesday, Oct. 7. Kahun’s agent Jiri Hamal, however, told The Associated Press his client hasn’t ruled out rejoining the team. Hamal said he’s scheduled to have further contract discussions with the Sabres on Thursday to see if the two sides can reach a deal. (AP Photo/Ross D. Franklin, File)

BUFFALO, N.Y. (AP) — Buffalo Sabres general manager Kevyn Adams would like to re-sign promising young forward Dominik Kahun, but not if the player has arbitration rights.

Adams took what he called a “calculated” approach in determining not to retain Kahun’s rights on Wednesday, and instead hoped the two sides can strike a deal before the NHL’s free agency period opens Friday.

“We continue to have dialogue with his agent and made it clear that we’d like to continue those conversations,” Adams said after concluding the two-day draft. “I think he understands that we believe in him as a player, and it was just a position where we weren’t able to get to a spot where we both felt comfortable.”

Had Buffalo issued the player a qualifying offer, he would’ve been eligible to appeal the deal in arbitration.

“We still want to talk,” Hamal said. “Buffalo was a great option for him and we believe we might find a solution.”

Hamal said he rejected the Sabres’ contract offer as “not being good enough.”

The 25-year-old Kahun was an undrafted free agent out of Germany, and broke into the NHL by signing a two-year $7.55 million bonus-laden contract with Chicago before the 2018-19 season. He was traded to Pittsburgh the following offseason, and then acquired by Buffalo in a trade for Conor Sheary and Evan Rodrigues in February.

Kahun scored two goals and four points in six games with the Sabres before the season was paused due to the coronavirus pandemic. Overall, he has 25 goals and 43 assists for 68 points in 138 career NHL games.

The Sabres aren’t the only team risking losing restricted free agents entering an offseason in which the NHL salary cap remains fixed at $81.5 million.

The Ottawa Senators did not issue a qualifying offer to forward Anthony Duclair after GM Pierre Dorion said he offered the player a “substantial raise.”

Adams took over after Jason Botterill was fired in June as part of ownership's cost-cutting purge, and has declined to say whether he has any spending limits on payroll.

As for Kahun, Adams said wanted to be prudent in the event the team targets other players in free agency.

“That’s part of the thought process,” Adams said. “Let’s make sure we’re being flexible and giving ourselves a chance to see what’s out there as we go into Friday.”

Pilut has left the team to play in the Kontinental Hockey League. The Sabres, however, hold his rights should he return to the NHL.