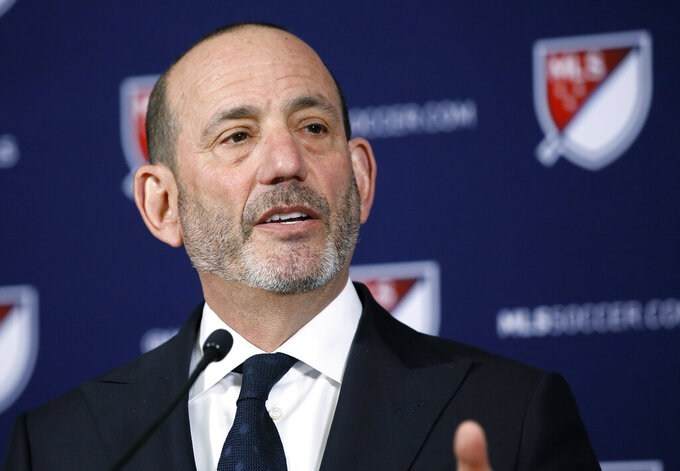 FILE - In this April 18, 2019, file photo, Major League Soccer Commissioner Don Garber speaks at a news conference in Los Angeles. The big unknown for Sacramento Republic FC is how long MLS will wait for the franchise to put together a new lead investor group when so many other cities seem to be chomping for a chance at an expansion team. Commissioner Garber has expressed his support for the viability of the Sacramento market. (AP Photo/Alex Gallardo, File)

Todd Dunivant and the rest of the Sacramento Republic FC staff arrived at work on Feb. 26 believing it was a standard Friday: prepare for the upcoming USL season to start in May and continue the work on the club’s Major League Soccer expansion plans.

By the end of the day, the plans to join MLS were completely altered, and almost derailed.

“It was unexpected news right when we found out, when the league found out that the previous investor was pulling out,” Dunivant said. “It caught everybody by surprise. There was initial shock and obviously a lot of of impact.”

It’s been a couple of weeks now since Ron Burkle announced he was backing out as the lead investor for the Sacramento expansion team, leaving the city, staff and league scrambling to find stable footing for what was expected to be the 30th MLS franchise.

Dunivant already had plenty on his plate as the general manager of the USL club, then he was named president a few days after Burkle’s announcement when Ben Gumpert announced he was resigning as president and chief operating officer.

For the past two weeks, Dunivant has been having meetings, making calls and trying to land a new lead investor, or investors, to keep the expansion franchise from going elsewhere.

“There’s already been inbound interest that’s come to us and we’re having active conversations with folks that are interested in Sacramento and MLS,” said Dunivant, who played 13 seasons in MLS, mostly with the LA Galaxy. “I think for us, it’s telling that story. This is a project unlike any other and the large the bulk of the work has been done.”

MLS announced the Sacramento Republic as its 29th team on Oct. 21, 2019, saying the team would start play in 2022. Last summer, the league announced Sacramento would not start play until the 2023 season because of the COVID-19 pandemic. At the time, the league delayed Charlotte, North Carolina, until 2022 and St. Louis until 2023.

Sacramento’s announced ownership group included Burkle, founder of The Yucaipa Cos. and an owner of the NHL’s Pittsburgh Penguins. He was joined by entertainment executive Matt Alvarez and Kevin Nagle, an investor in the NBA’s Sacramento Kings who had spearheaded the bid for MLS expansion since 2014.

The centerpiece of the franchise launch will be a 21,000-seat stadium, part of Sacramento’s Railyards redevelopment project that will expand the downtown core. The price tag of the stadium was first targeted for $300 million but rising construction costs and delays due to the pandemic seemed to be part of the underlying reasons for Burkle’s withdrawal.

Nagle, who owns the USL franchise, has remained a major proponent and supporter in the effort to find a lead investor, Dunivant said. The team also has received strong support from Sacramento Mayor Darrell Steinberg, who has repeatedly referenced the city’s efforts to keep the Kings from moving to Seattle nearly a decade ago.

The major unknown is how long MLS will wait for the franchise to put together a new lead investor group when so many other cities seem to be chomping for a chance at an expansion team. Commissioner Don Garber expressed his support for the Sacramento market and the league seems to be willing to give Dunivant some time to find a solution.

“Our focus is let’s take the urgency and the momentum that we have right now of finding that investor and the positive conversations we’ve had and let’s seize it,” Dunivant said. “We see urgency on this and we have a shovel-ready project, we have the pieces in place and we need that final piece of the investor.”