Safe at home? Off-field behavior will be decisive for MLB 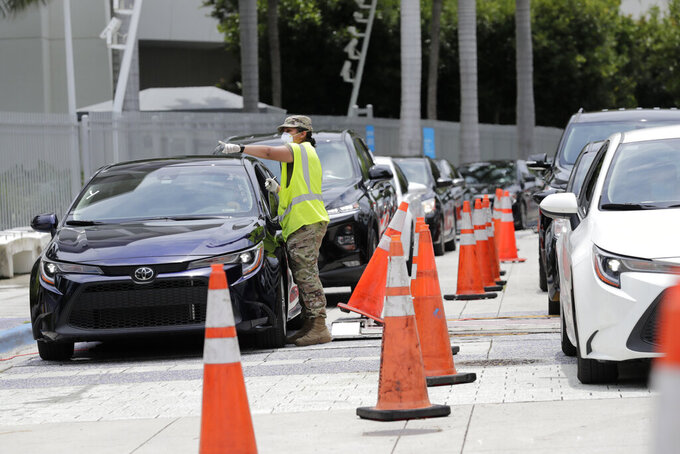 A member of the Florida National Guard monitors vehicles waiting in line outside of Marlins Park at a COVID-19 testing site during the coronavirus pandemic, Monday, July 6, 2020, in Miami. The long line of cars each morning as players arrive at work provides a reminder of the risks when they leave. Behavior away from the ballpark will be a big factor in determining whether Major League Baseball's attempt to salvage the 2020 season can succeed. (AP Photo/Lynne Sladky)

MIAMI (AP) — Reliever Nick Vincent signed last week with the Miami Marlins and settled in for two days of quarantine in his hotel room while awaiting clearance to join workouts.

“That was a little bit different,” he said. “In 48 hours, you're definitely a little stir-crazy."

Vincent spent a lot of time watching TV, including the news, which reinforced that it was wise to lay low with the coronavirus crisis worsening in Florida and much of the country.

And as Major League Baseball attempts to salvage the 2020 season, behavior away from the ballpark will help determine the outcome. Just like on the field, success will depend on how many players are safe at home.

“That’s going to be the biggest challenge for this game to move forward — the off-the-field stuff and what guys do," said Vincent, an eight-year major league veteran. “It's just going to take one team to mess it up for everybody. I hope everybody gets that. It’ll take five guys to get a whole team sick, and then if a whole team is sick, that could end the season for everybody else.”

Multiple issues could sabotage baseball's relaunch. Some players — including David Price of the Los Angeles Dodgers and Ryan Zimmerman of the Washington Nationals — decided not to take part because of the health risk, and testing glitches further raised concerns. Positive tests for four Atlanta Braves, including four-time All-Star first baseman Freddie Freeman, underscored the fragility of MLB's plan to navigate the pandemic.

There's also worry regarding what happens when players are away from work and beyond whatever bubble can be created at the ballpark.

“Guys are 23, 24. They’re young. They’re in a sense bullet-proof,” Marlins manager Don Mattingly said. “But if we’re going to run around at night and do whatever we want to do, we’re going to put everybody’s family at risk.”

Long lines of cars at the virus testing site at the Marlins' ballpark provide the team with a daily reminder of the hazards off the field.

Players broadly acknowledge they must police themselves — and each other. Dodgers ace Clayton Kershaw said he trusts his teammates to act responsibly away from the ballpark, but he acknowledged it might be harder for players who are single or living in confined spaces like apartments.

“Everyone has to take accountability for being as safe as possible, and I have trust in that,” Kershaw said. “If you want to see the season through, if you want to give it the best shot, you can’t be stupid."

MLB has given players guidance regarding off-the-field conduct during the pandemic, discouraging the sort of after-the-game activities that have been part of baseball since before Babe Ruth toasted his first home run.

Or, as Chicago Cubs manager David Ross put it: “We’re not going to be able to go out to bars. That would be an extremely selfish move."

Potential repercussions extend beyond any player seeking a thirst-quencher to his family, teammates, opponents and even the sport's ability to continue.

Part of the motivation for good behavior might be the same thing that drives most things in baseball — wins and losses.

The defending NL East champion Braves were rocked at the start of camp by the positive tests. Their setback underscored the new weight of the annual preseason mantra, “If we can stay healthy ...”.

“I think we all recognize that the team that is hit the least hard by the virus, that’s able to keep themselves healthy out there, is going to have the best chance to compete,” Houston Astros general manager James Click said.

For a major leaguer, it's counterintuitive: Avoid crowds.

“I just make Christian Yelich get me everything, man," Milwaukee Brewers outfielder Ryan Braun said. “That’s my strategy. I send him text messages with my grocery requests, all my food requests.”

Braun was joking, of course, but Brewers manager Craig Counsell said each player must decide how seriously to take the virus.

“Everybody treats COVID differently,” Counsell said. "Everyone has their own viewpoint of it. In this case, we all have to understand what can happen if there’s a number of positive tests — it’s not going to work. So, we have to all do this together.

“It’s not something I’m going to have to plead with them about. They’re fully aware of it. They are the ones that are going to be pleading with each other.”