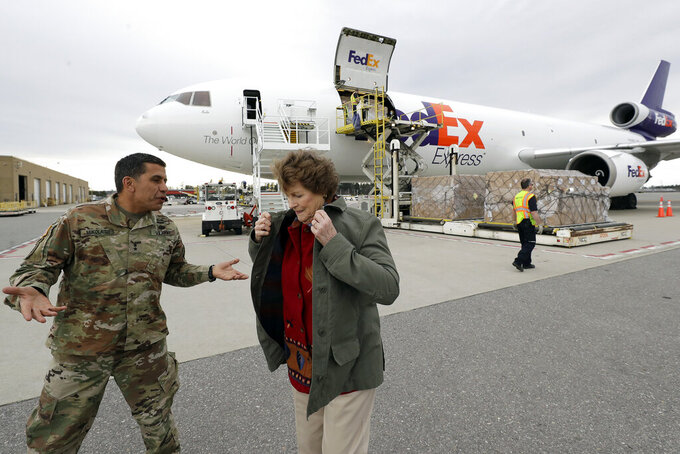 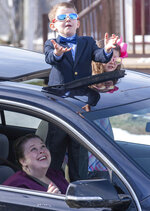 BOSTON (AP) — A look at developments around New England related to the coronavirus pandemic:

The Republican governor was joined by Democratic U.S. Sen. Jeanne Shaheen and Dean Kamen, who helped spearhead the effort.

“This has been an incredible team effort," Sununu said from the tarmac with the plane behind him.

Sununu said the gear will be distributed to areas of greatest need as part the state's response to the COVID-19 pandemic. The state has reported 985 positive tests as of Sunday.

New Hampshire’s Supreme Court has canceled the July 28-29 bar exam and will reschedule it for some time in the fall.

A federal judge is allowing a man convicted of taking millions of dollars from the United Way to be confined to his New Hampshire home while he awaits sentencing.

A lawyer for Imran Alrai said his client, currently at the Merrimack County jail, is not in good health and is at high risk for complications from COVID-19 if he catches it. Among the conditions he must follow is the return of money he put in Pakistani bank accounts.

Alrai, of Windham, was convicted last year of wire fraud, money laundering and transportation of stolen funds. Prosecutors said he used his position as a vice president of the United Way of Massachusetts Bay and Merrimack Valley to steal $6.7 million over about five years.

Statistics released Sunday by the state Health Department show Vermont has a total of nearly 730 cases of COVID-19.

The number of deaths stand at 27. There are 34 people currently hospitalized.

The Vermont Department of Corrections and Department of Health have tested all inmates and staff at the Northwest State Correctional Facility after an inmate tested positive for COVID-19 on April 8.

The Department of Corrections said Saturday it's prepared to use the Northeast Correctional Complex as a surge location for inmates who test positive. Staff who tested positive are being asked to quarantine at home or at a state isolation site.

The state has also launched an online tool to track inmate testing for COVID-19.

The Burlington Free Press reported the tracker has a breakdown of negative and positive tests and the number of inmates in medical isolation.

The number of people in Massachusetts who have died from COVID-19 rose to 756 on Sunday, an increase of 70.

The number of residents who have tested positive for the coronavirus that causes the disease rose to more than 25,500, according to the Department of Public Health.

More than 2,200 have been hospitalized since the outbreak’s start. Nearly 117,000 have been tested.

Massachusetts lawmakers are considering a bill that aims to address concerns about gathering signatures for candidates during the coronavirus state of emergency.

The Senate plans to take up the bill Monday.

The plan will establish COVID-19 recovery centers in certain nursing homes. The homes will accept patients discharged from acute care hospitals but still recovering from COVID-19.

Some authorities in Connecticut used the holiday weekend to help protect vulnerable residents. Police in Old Saybrook delivered Saturday nearly 150 Easter baskets to elderly residents that were filled with gloves and face masks, according to WTNH-TV.

Seven more deaths in Rhode Island have been attributed to COVID-19, bringing the total deaths in the state to 63 as of Sunday.

The number of current COVID-19 hospitalizations topped 200. The number of people who have tested positive for the disease rose to more than 2,600 since March 1.

U.S. Sen. Jack Reed is supporting a proposal that would give a salary boost to front-line workers, including nurses, grocery story workers, cleaning staff and letter carriers.

The Rhode Island Democrat told WPRI-TV on Saturday the country should reward those who put their health at risk to help fight COVID-19.

The number of coronavirus cases in Maine has remained relatively stable.

State officials announced that as of Sunday, the number of confirmed cases in the state is 633. Of those people, 266 have recovered and 120 are hospitalized.

The number of COVID-19 deaths in the state remains at 19.

Health officials said the information represents the number of full-time Maine residents who have tested positive for COVID 19. They said the true numbers are likely higher.

The largest distributor of food to pantries across Maine is struggling with soaring demand during the pandemic.