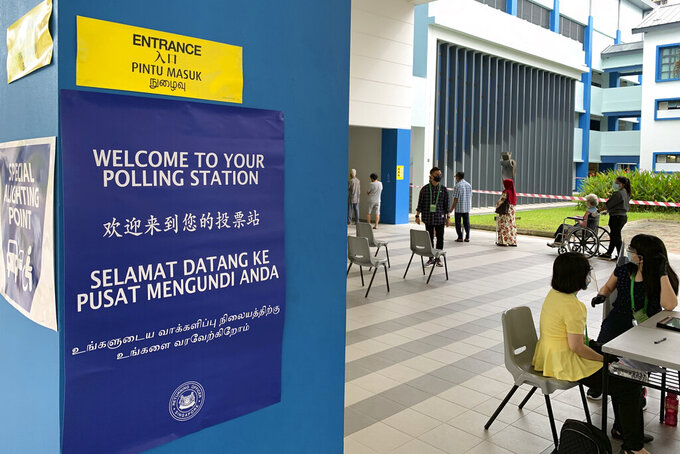 SINGAPORE (AP) — Some 2.65 million Singaporeans will cast their ballot Friday with strict safety protocols to prevent the spread of the coronavirus. Prime Minister Lee Hsien Loong's long-ruling party is expected to extend its unbroken rule, bolstered by the pandemic and fears of a severe economic recession. What you need to know about the vote:

Lee's People's Action Party has been criticized for holding polls amid the pandemic, just weeks after Singapore emerged from two months of virus lockdown and daily virus cases still topping 100. The tiny nation of 5.8 million people has reported more than 45,000 cases, most of them foreign workers living in crowded dormitories that were overlooked in the early phase of its crisis management. The government has increased polling stations from 880 to 1,100 and implemented strict safety measures including the use of masks, hand sanitizer and gloves. Election workers are wearing full protection gear. All voters were assigned a two-hour window to cast their ballots to reduce crowding. Voters older than 65 have priority during the first four hours polls are open. COVID-19 patients and those who are on quarantine orders, numbering around 350, cannot vote to reduce the risk of community transmission. Another 360 Singaporeans who have been given stay-home notices and those with fever are allowed to vote only during the last hour, with extra precautions being taken. Those serving their stay-home notices at hotels can cast their vote without leaving their rooms, with mobile polling teams delivering ballots to them.

This is Singapore's second general election where the opposition is contesting all parliamentary seats. The PAP faces a one-on-one contest in most of the 93 seats up for grabs. Ten small opposition parties contesting the polls have urged Singaporeans to reduce the PAP's overwhelming majority in parliament, and give them a louder voice to ensure more transparency and accountability. The Workers Party, the only opposition that won seats in 2015, and the new Progress Singapore Party led by a veteran former PAP stalwart are leading the challenge. Still, it will be a tall task. The PAP has been in power since 1959, and its popular vote has never slipped below 60%. In 2015, it won nearly 70% of total votes and 93% of parliamentary seats.

Lee, who is the country's third prime minister since 2004, faced new pressure when his estranged younger brother joined an opposition party last month. Lee Hsien Yang, 62, is not contesting the polls but has actively campaigned against the PAP, co-founded by his father and first Prime Minister Lee Kuan Yew who turned the tiny island into one of the world's wealthiest nations during his 31-year rule. The younger Lee said the PAP had turned into an elitist party with no checks and balances under his brother, and urged Singaporeans to vote fearlessly to deny the PAP a “blank check." The Lee brothers have been engaged in a public spat in the last few years over the fate of their family home. Lee Hsien Loong says the election is not about his family dispute but the future of Singapore.

Concerns about the prolonged pandemic and an economic slump may push voters to stick to the tried and tested. The affluent city-state is expected to dip into its worst-ever recession this year, with its economy expected to shrink by up to 7%. Lee's government has unveiled several economic assistance packages totaling nearly 100 billion Singapore dollars ($71.7 billion) but warned the economic impact hasn't been fully felt yet. Issues raised during campaigning focused on jobs and securing Singapore's future in a post-COVID world. Lee plans to retire in two years at age 70, thought it may be delayed if the economy is not back on its feet. Some see the election as a vote of confidence in the new leadership led by his designated successor, deputy and finance minister Heng Swee Keat.