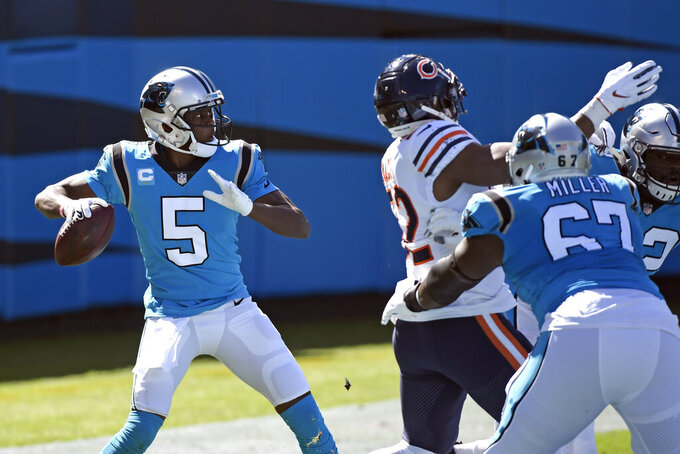 Carolina Panthers quarterback Teddy Bridgewater (5) looks to pass against the Chicago Bears during the first half of an NFL football game in Charlotte, N.C., Sunday, Oct. 18, 2020. (AP Photo/Mike McCarn)

NEW ORLEANS (AP) — The time has come for Teddy Bridgewater to return to the place where he rehabilitated his NFL career and try to beat the team that helped him do it.

Bridgewater made two starts in the Superdome last year during his 5-0 run as a fill-in starter for then-injured Saints quarterback Drew Brees.

If he can win Sunday with his new team, it’ll move the Carolina Panthers (3-3) ahead of New Orleans (3-2) in the NFC South.

“I hated to see him leave the building and now he’s over there. Now he’s the enemy. He’s a frenemy,” Saints defensive end Cameron Jordan said playfully. “He’s an enemy, but he’s a friend. ... And I can’t wait to hit him.”

The Saints tend to be effusive in their praise of Bridgewater, who was attempting to come back from a major knee injury that sidelined him nearly two full seasons when New Orleans made a trade with the New York Jets in 2018 to bring him in as Brees’ backup.

“I really appreciated that time with Teddy, and I’m extremely happy for him and the opportunity that he has there in Carolina,” Brees said. “He’s going to be a franchise quarterback there for a very long time, and have a ton of success — and he deserves it.”

Saints coach Sean Payton, who designs and calls New Orleans' offense, figured Bridgewater would be a good fit in his scheme and wasn't disappointed.

“He has an outstanding skillset. He moves. He’s got good arm strength. He’s accurate,” Payton said. “He’s a fantastic leader and players play hard when they’re with him.”

Likewise, Bridgewater is grateful for his time with Payton and Brees.

“I remember talking to Sean Payton and he said he had a vision for me and I just trusted everything he told. And his vision that he had for me has actually come to life,” Bridgewater recalled, alluding to Payton’s pledge to help him eventually work his way back to starter status in the NFL. “I am just glad I had a chance to cross paths and learn so much.”

When the 41-year-old Brees, after pondering retirement, decided to keep playing in 2020, Bridgewater entered free agency and was quickly lured to Carolina, where former Saints offensive assistant Joe Brady was the new offensive coordinator.

“Once I heard Carolina offered and heard Joe Brady was here, a lot of it made sense to me,” Bridgewater said. “I’m thankful I have a chance to be here right now.”

For the first time this season, ticketed members of the public will be permitted in the Superdome for what is the Saints’ fourth home game.

It’ll be just a fraction of the usual 73,000 during prior seasons.

The City of New Orleans is allowing a maximum of 3,000 ticketed fans as part of an agreement that could gradually lead to greater numbers in the stadium for future games if COVID-19 figures in New Orleans remain stable or diminish as time goes on — and if games in the dome are not found to be a source of community spread.

Prior to the agreement, the Saints had considered playing at LSU’s Tiger Stadium, an outdoor, 102,000-seat venue where 20,000-plus fans have been permitted to attend games.

“It’s good too see that,” Payton said. “It’s great that we’ll have more and more fans there — safely, I might add — and kind of go from there.”

Payton made a point in team meetings to remind his staff and players that the Panthers no longer resemble the divisional rival with which they’d become quite familiar when Ron Rivera was Carolina’s coach the previous nine seasons. New coach Matt Rhule, like Rivera, specializes in defense, but approaches it differently.

But while the Panthers have a new offense, Payton acknowledged that Brady's system looks familiar to that of the Saints.

“Granted, from an offensive standpoint, there’s some similarities, but it’s not what we’ve had prior when we faced Carolina,” Payton said. "So, new offense, new defense, new coordinators, obviously new head coach. ... That’s where the preparation lies.”

Carolina is converting just 48% of trips in the red zone into touchdowns, which ranks 28th in the league. A week ago the Panthers scored on just one of three red zone opportunities in a 23-16 loss to the Bears, who have the league’s best red zone defense.

This week could provide the perfect remedy for Bridgewater and Co. New Orleans has the league’s second-worst red zone defense, allowing teams to score touchdowns on 85% of red zone trips.

Saints receiver Michael Thomas, the 2019 Offensive Player of the Year after setting an NFL record with 149 catches in a season, was on schedule to return in Week 5 from an ankle injury before he was benched because of an outburst at practice.

Payton said Thomas’ punishment has been lifted, but was in no mood to discuss the receiver’s status, or temperament, coming off the club’s Week 6 bye.

“We’ll see,” Payton said. “I’m not interested in talking about how he responded (to discipline). We’re getting ready for Carolina this week. We had a good bye week and here we are.”

While D.J. Moore is viewed as Carolina’s No. 1 receiver, free agent pickup Robby Anderson has excelled most in Brady’s offense.

The former New York Jet is proving he’s more than a deep threat, hauling in 40 receptions for 566 yards, which is second-best in the league this season. He’s on pace to post a career-high 1,509 yards receiving. Rhule said he likes how Anderson has been running routes and his fearlessness in catching the ball across the middle and underneath coverage.