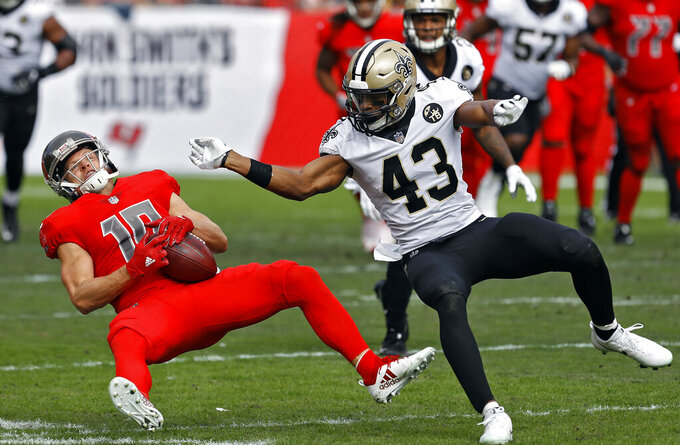 FILE - In this Dec. 9, 2018, file photo, New Orleans Saints free safety Marcus Williams (43) levels Tampa Bay Buccaneers wide receiver Adam Humphries (10) after a reception during the first half of an NFL football game in Tampa, Fla. Williams enters his final season under contract saying he is determined to become a better tackler. He says game video clearly shows it is an area where he needs to improve and he will not shy away from it. (AP Photo/Mark LoMoglio, File)

NEW ORLEANS (AP) — Saints safety Marcus Williams has made it a priority to directly and openly address those painful instances when his trouble with tackling has overshadowed his ability to defend passes.

“The film doesn’t lie,” Williams said during a video media conference on Thursday from the Saints training headquarters.

Two pivotal plays stand out in the collective memories of football fans in New Orleans and beyond.

There was the complete miss of Stefon Diggs during the Minnesota receiver’s leaping catch and run for a 61-yard touchdown as time expired in a divisional playoff game, ending New Orleans’ 2017 season in the divisional round of the playoffs.

And in the final minute of a game last December against San Francisco, Williams was dragged downfield by George Kittle while clinging desperately to the 49ers tight end’s face mask. Kittle’s gain, combined with Williams’ penalty, netted the Niners 53 yards and set up a short field goal as time expired that lifted San Francisco to a 48-46 victory.

The Niners even featured the play in a social media campaign regarding the coronavirus pandemic in early July, urging viewers to, “Be a saint, grab a face mask."

“I definitely have to improve on my tackling,” Williams said. “That’s one thing that will elevate my game and help everybody else around me.

Williams, who is entering his final season under contract, was a second-round draft choice out of Utah in 2017. He was highly regarded in college for his ability to locate, run down and intercept deep passes.

Those same skills have been evident in the NFL as well. He had four regular season interceptions as a rookie and another in the playoffs.

He had four more interceptions last season, returning one for a touchdown. Along with 10 interceptions in three seasons, he also has two forced fumbles and a fumble recovery.

“He has good instincts and range,” Saints coach Sean Payton said of Williams this week. “He can break (on the ball), and each year we’ve been able to see his instincts on the back end.

“He’s got to work on his tackling,” Payton added. “He’s got to be better in that area. But I think each season we’ve seen steps that have really helped our defense. ... I feel like you’re now getting to a point where his experience is showing.”

When Philadelphia veteran safety Malcolm Jenkins, who was drafted by New Orleans in 2009, became a free agent this offseason, the Saints raced to bring him back.

Jenkins has won Super Bowls with both of his NFL teams, and the Saints are hoping his leadership and experience in the secondary benefits younger players like Williams and second year defensive back C.J. Gardner-Johnson.

“He’s obviously come in and gave us that leadership role already,” Williams said of Jenkins. “He’s showing me different things that I may haven’t known about safety ... Just being able to add those little different things to my game will help me elevate my game.”