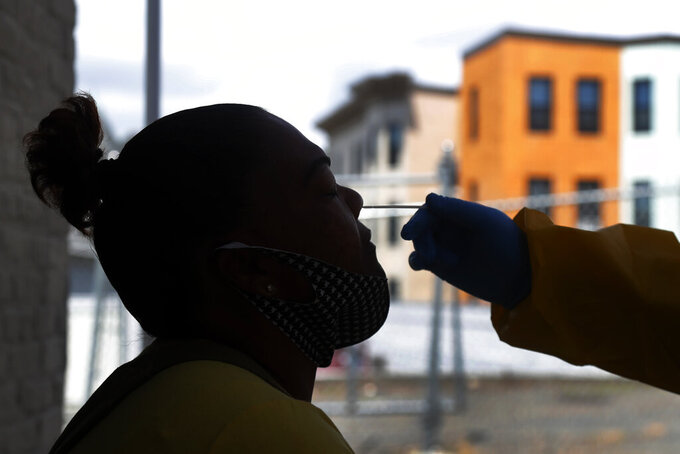 Evelinda Villegas receives a COVID-19 test at the Whittier Street Health Center's mobile test site, Wednesday, July 15, 2020, in Boston's Dorchester section. The health center has administered free COVID-19 tests to over 5,000 people. The tests, administered since April 13, have been a popular service in Boston's low-income communities that have experienced high rates of infection. (AP Photo/Elise Amendola)

BOSTON (AP) — Brewer Sam Adams is shutting down the roof deck patio of its Boston Tap Room to protect guests and employees because of what it describes as “influx of out-of-state visitors from COVID-19 hot spots.”

The taproom opened in February, but was closed because of the pandemic. It reopened about three weeks ago.

“While we love welcoming visitors to the taproom, we also know we need to do our part to keep everyone as safe as possible,” the company said in a Facebook post on Tuesday.

Beer aficionados can still sample the brewer's offerings. The tap room is offering contactless pickup for online orders of Sam Adams merchandise and beers, including varieties exclusive to the taproom.

“We’ll continue to monitor trends and will reopen our rooftop patio when we believe it is in the best interest of our drinkers and coworkers," the company said.

There will be no Swan Boat rides in the Boston Public Garden this summer for the first time in nearly a century and a half.

The Paget family, which has run the iconic Boston tradition since 1877, said on its website that under current coronavirus safety guidelines, it is impossible to offer the rides this summer.

“Our business is a small and intimate environment that brings people together in a memorable way," the family said. “As a result, we face some unique challenges in our operation that make it diffuclt to assure the level of safety we are committed to providing.”

The state’s congressional delegation is calling on U.S. Health and Human Services Secretary Alex Azar to extend the COVID-19 public health emergency declaration that is set to expire on July 25.

The all-Democratic delegation — led by U.S. Sen. Elizabeth Warren and U.S. Rep. Joe Kennedy III — wrote a letter to Azar on Wednesday arguing that the emergency declaration should be extended until the end of the pandemic, calling it “a lifeline for Massachusetts.”

“This determination ensured that Massachusetts would be able to furnish healthcare services they otherwise would not,” the delegation wrote of the initial declaration. “It enabled the Commonwealth to waive certain Medicare, Medicaid, and CHIP requirements, expand the healthcare workforce, and implement critical programs, such as the expansion for telemedicine services.”

The museum in Grafton reopened Tuesday after a weekend of cleaning by volunteers, according to The Telegram & Gazette.

The 10,000-square-foot museum is home to a collection of items dating from 1865 to the modern day, including uniforms, vehicles, and weapons — and in one area, a wall covered with the names of state police troopers who died in the line of duty dating to the 1800s.