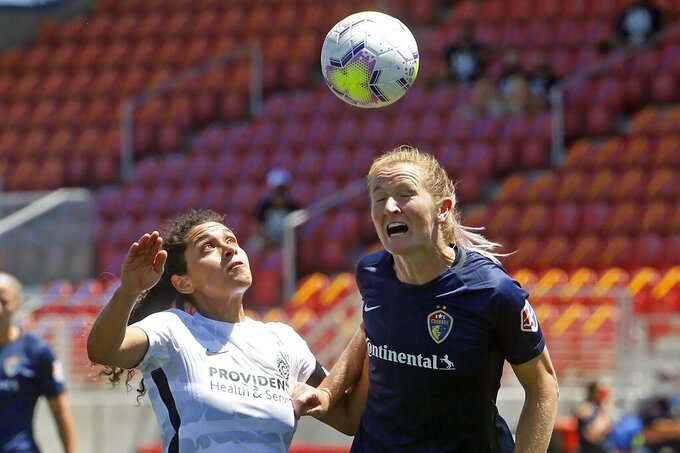 FILE - Portland Thorns FC midfielder Rocky Rodriguez, left, and North Carolina Courage midfielder Samantha Mewis, right, battle for the ball during the second half of an NWSL Challenge Cup soccer match at Zions Bank Stadiumin Herriman, Utah, in this Saturday, June 27, 2020, file photo. Samantha Mewis is back home in the National Women's Soccer League after a stint overseas with Manchester City. On Monday, May 24, 2021, she returned to practice with the North Carolina Courage after officially re-signing with the club. (AP Photo/Rick Bowmer, File)

Samantha Mewis is back home in the National Women's Soccer League following a stint overseas with Manchester City.

She returned to practice Tuesday with the North Carolina Courage after officially re-signing with the club.

“My time at Man City was incredible. I have nothing but good things to say. I really think that I learned a lot and gained so much from my experience there,” Mewis said. “Staying would have been another great opportunity for me, I just feel like right now this is the best place. I’m definitely open to anything in the future but I’m really happy to be home with the Courage.”

In the midst of the pandemic last year, Mewis was one of several high-profile NWSL players who opted to play in Europe — a list that includes Rose Lavelle, Tobin Heath, Christen Press and Alex Morgan.

Mewis, who was on the U.S. team that won the World Cup in 2019, joined the NWSL in 2015 with the now-defunct Western New York Flash then moved with her teammates to North Carolina in 2017 when the team was sold.

A regular with the national team since 2016, Mewis was voted the 2020 U.S. Soccer Player of the Year. On Tuesday, she was named to the U.S. team's Summer Series roster, and it is likely she'll be named to the squad that goes to Tokyo this summer for the Olympics.

The NWSL held the Challenge Cup tournament last summer in a bubble in Utah, then returned to home markets for a limited series of games in the fall. But Mewis and others decided it was in their best interests to continue training and competing, and European teams — which play on a schedule largely opposite the NWSL — afforded the players that opportunity.

Mewis formally rejoined the Courage last week as an allocated player, which means U.S. Soccer is paying her salary as a national team regular. She signed with the team for an additional two seasons, keeping her with the Courage though 2023.

Mewis scored seven goals in 17 matches with Manchester City, joining Lavelle and former Courage teammate Abby Dahlkemper on the Women's Super League team. Lavelle has also returned to the United States, but as of yet has not joined her club team, OL Reign.

The Courage have started the NWSL season 0-1-1. Mewis is expected to play Friday when North Carolina hosts expansion Racing Louisville.

As for her first session back in North Carolina, the Massachusetts native noted with a laugh that there's new carpet in the team's facilities, and that she's going to have to get used to the heat.

She also said she's grateful for her time abroad.

"I feel like I got better every day," she said. “I feel like the girls that I was playing with were world-class players. I learned so much. I think that the technical ability and their tactical awareness was really high-level and something that I felt like I had to catch up to. But again, both environments are awesome and I’m just honored and and really fortunate to have been able to experience both.”