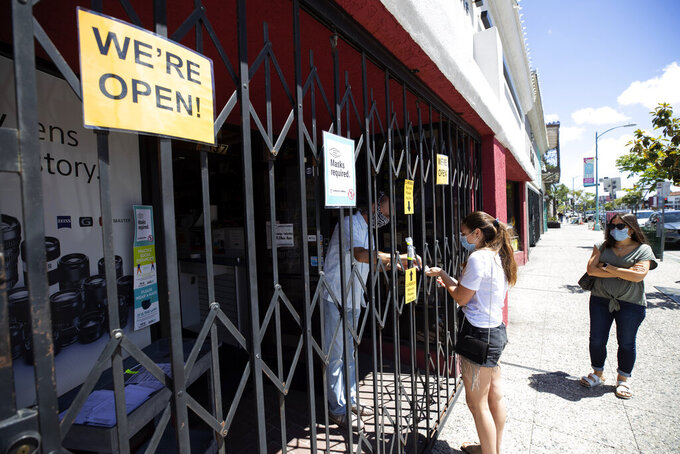 A woman pays for photo prints from George's Camera during curbside service Tuesday, May 19, 2020, in San Diego. With encouraging results in their fight against the coronavirus, San Diego County supervisors voted Tuesday to ask the state to allow California's second-largest county to be a test case for whether more rapid reopening can safely occur.(AP Photo/Gregory Bull)

SAN DIEGO (AP) — With encouraging results in the fight against the coronavirus, San Diego County supervisors voted Tuesday to ask the state to allow California’s second-most populous county to be a test case for more rapidly reopening businesses and allowing more gatherings and recreational options.

The plan would let the county jump ahead to stage three in Gov. Gavin Newsom's four-stage plan and reopen such things as apartment building swimming pools along with gyms and hair and nail salons, all with strict safety rules. It also would green-light outdoor religious services with restrictions and bring back youth sports but without games or spectators.

As San Diego looks to move more quickly, Los Angeles County officials plan to continue a more methodical approach. Officials there say it's likely to take until July 4 before it can consider a broader reopening of businesses.

San Diego and Los Angeles are California's two largest counties, and only about a two-hour drive apart, but have had different experiences curbing the virus. Los Angeles has three times San Diego County's population of 3.3 million but nine times as many deaths — 1,913 to 211.

Early in the pandemic, San Diego won praise for taking in cruise ship passengers and U.S. citizens flown on government-commissioned planes from China while managing the spread of the virus among local residents. Authorities credit the county's swift actions to close beaches and ramp up hospital capacity, along with having a population that has followed the rules on social distancing and other restrictions, as reasons to move more rapidly.

“We know what we need to do to be safe, so let's go forward," Supervisor Dianne Jacob said.

The vote came a day after Newsom, under increasing pressure to give local governments more latitude, relaxed health standards the state's 58 counties are required to meet to move deeper into the second phase of reopening and welcome back diners in restaurants and customers to stores, with restrictions.

In making the changes, Newsom noted that COVID-19 hospitalizations statewide have declined, while testing and tracking infections have ramped up. He said if the trend continues the state could allow pro sports without spectators in early June.

Health officials said San Diego County meets the new criteria to go beyond the takeout and curbside retail service now allowed and supervisors approved submitting a request to be given that exception. Officials said restaurants could be serving diners as soon as Wednesday.

Sacramento County also was among larger counties that submitted a plan for reopening and health officials said they got approval Tuesday afternoon. In addition to restaurant dining and in-store shopping, the county will allow religious services and ceremonies such as graduations to be conducted via “drive through,” and also will allow the opening of small offices, child care, outdoor gyms and museums and full resumption of public transit.

Newsom has made it clear that no county can move into stage three yet but also has said he wants to give more discretion to county governments and what they believe best reflects the interest of their residents.

San Diego wants to press that issue but won't defy the governor as three rural counties in Northern California did several weeks ago when they moved ahead with their reopening plans before getting state approval.

San Diego County officials point to the widespread compliance after reopening its beaches and parks during the past three weeks, in contrast to neighboring Orange County, where the governor briefly closed beaches after seeing photos of hordes of people sitting on the sand. Beaches there reopened days later after more restrictions were put into place.

San Diego County's chief administrator, Helen Robbins Meyer, told the board at Tuesday's meeting that state officials are aware of the plan to move into phase three and though “they did not embrace it fully, they indicated a willingness to at least review our proposal.”

One supervisor voted for loosening restaurant and retail restrictions but against asking for the pilot program. Nathan Fletcher said while he understands the pressure to restart the economy, it is too soon to jump to stage three without taking a week or so to monitor how it goes with diners in restaurants and shoppers in stores.

Fletcher said, “doing this in a thoughtful and methodical way is best.”

Newsom, the first governor in the country to issue a statewide stay-at-home order, is under pressure to move quickly to reopen businesses so some of the millions who lost their jobs can go back to work. But the state has been cautious, afraid that moving too fast could spark a second COVID-19 wave that could prove even more devastating to the economy.

The governor dropped a requirement for counties to have zero deaths over a two-week period after large counties complained they would not be able to meet that criteria anytime soon.

San Diego County easily meets the new standard of a positive test rate — the percentage at which people tested positive for the virus over the past week — of less than 8%. Its rate is 3.2%, public health director Dr. Wilma Wooten said.

Los Angeles County has a positivity rate of 9%, Supervisor Hilda Solis said during Tuesday’s daily briefing. She set a target date of July 4 for the further reopening of “certain segments of our business."

Having a target date in mind is “reassuring” but “we have to do a lot of things right” before we get there, county health director Dr. Barbara Ferrer said.