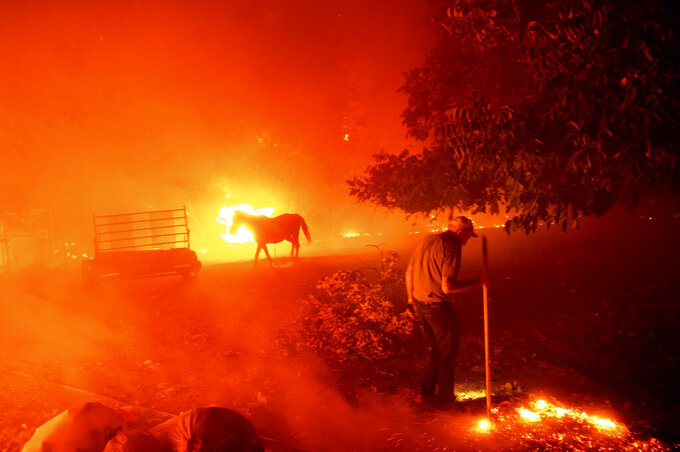 Bill Nichols, 84, works to save his home as the LNU Lightning Complex fires tear through Vacaville, Calif., on Wednesday, Aug. 19, 2020. Nichols has lived in the home for 77 years. Fire crews across the region scrambled to contain dozens of wildfires sparked by lightning strikes as a statewide heat wave continues. (AP Photo/Noah Berger)

VACAVILLE, Calif. (AP) — Crews were battling wildfires in the San Francisco Bay Area and thousands of people were under orders to evacuate as dozens of wildfires blazed across the state amid a blistering heat wave now in its second week.

Police and firefighters went door-to-door before dawn Wednesday in a frantic scramble to warn residents to evacuate as fire encroached on Vacaville, a city of about 100,000 between San Francisco and Sacramento. At least 50 structures were destroyed and 50 damaged and four people suffered burn injuries.

“This is an incredibly emotional and stressful time for most of us who’ve endured a number of wildfires over the last few years," said Sonoma County Sheriff Mark Essick,. He reminded people about sirens that have been installed in recent years to tell people to evacuate.

Ash and smoke filled the air over San Francisco, which is surrounded by at least five wildfires burning in multiple counties to the north, east and south. The so-called LNU Lightning fire is made up of several fires burning in five counties, including in Vacaville.

The California Department of Forestry and Fire Protection said the blazes were exhibiting “extreme fire behavior” and challenging firefighters. There is rugged terrain in several of the areas and unexpectedly strong winds overnight fanned the flames.

John Gardiner, 60, stayed up all night after receiving an alert from a neighbor of oncoming fire around just before midnight. His house and neighbors' homes were still safe, but he worried that could change as crews anticipate hot winds Wednesday afternoon.

“It was incredible, things swirling, winds just whipping through like a howling ripping sound and then you could hear explosions going off," he said. “You can taste smoke in your mouth."

Many evacuees were alerted around 2:30 a.m., the Vacaville Reporter newspaper said. Television footage showed some homes in flames and thick ash dropping in a rural area near Interstate 80 as the fire appeared to head toward more densely populated areas.

Diane Bustos told KPIX-TV that she and her husband tried to drive out but their vehicle caught on fire and they had to flee on foot. “I got all these flames on me and I lost my shoe, but I made it. God saved me," she said.

Gov. Gavin Newsom ordered a statewide state of emergency Tuesday, saying the blazes were “exacerbated by the effects of the historic West Coast heat wave and sustained high winds.”

In San Mateo and Santa Cruz counties, about 22,000 people were ordered to evacuate because of a fire burning in dense wooded parkland that threatened communities, Cal Fire spokesman Jonathan Cox said.

“This is a very active timber fire burning in two counties with a serious threat to both public safety and for structures that are out in front of it," he said.

Christopher Godley, Sonoma County's emergency management director, said about 10,000 people were under evacuation orders as crews battled two blazes and were working to set up an evacuation center with alternate locations for people exhibiting coronavirus symptoms.

He conceded that resources are strapped statewide.

“It’s difficult to second guess what the fire commanders are doing with their aircraft. But it’s not like last year when we saw just a huge wealth of resources flowing into the county," he said. “It is what it is.”

“I think the people around here, even the people that have structures in harm’s way, understand that they’re in a more rural area and that the people in more densely populated areas have to get the resources first," he said.

In the East San Francisco Bay, a cluster of 20 separate lightning-sparked fires threatened about 1,400 structures in rugged terrain with dense brush. Strong winds and low humidity made the firefight challenging.

Blazes engulfed rural and forest areas near the San Francisco Bay Area, near Salinas in Monterey County, around Oroville Dam north of Sacramento, forested areas west of Silicon Valley, in remote Mendocino County and near the Nevada state line north of Lake Tahoe.

Several also were burning in northern coastline areas and in Southern California.

The cluster of wine country fires threaten an area that only last year grappled with another massive blaze that forced 200,000 to flee — a task made more complicated this year because of the pandemic.

To the south, evacuations were ordered for all of Boulder Creek to the west of Silicon Valley, a community of 5,000 high in the Santa Cruz mountains where windy, long, forested roads, some paved, some dirt, can easily become blocked during storms or fires. About 6,000 structures were threatened by that blaze.