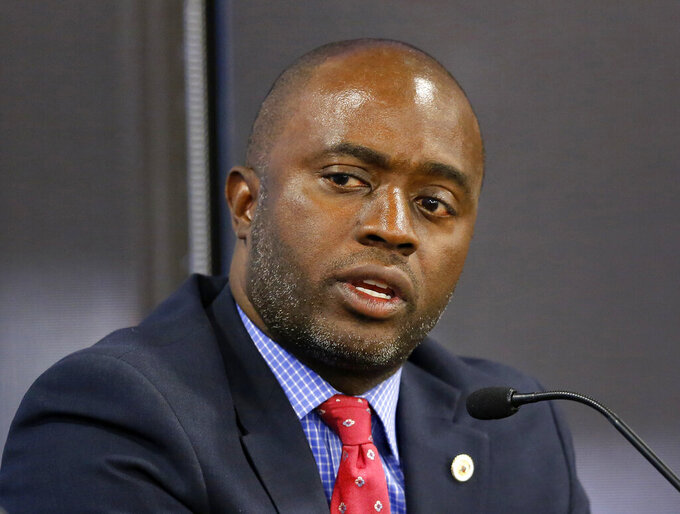 FILE - In this Sept. 11, 2018, file photo, Tony Thurmond appears at a debate in Sacramento, Calif. State Superintendent of Public Instruction Thurmond on Wednesday, July 15, 2020, applauded the state's two largest school districts, Los Angeles and San Diego, for this week's decision not to reopen classrooms this fall amid rising coronavirus cases but said the same rules need not apply in counties with low rates of infection. (AP Photo/Rich Pedroncelli, File)

SAN FRANCISCO (AP) — San Francisco and Sacramento on Wednesday became the latest cities in California to announce that public school students will not return to classrooms when the new term begins because of surges in coronavirus cases and delays in getting test results back.

They joined Los Angeles and San Diego, the state's two largest school districts, along with Oakland, Long Beach, Santa Ana, San Bernardino and others that have chosen to start the new term with digital learning amid strong concerns from teachers unions about the safety of staff on school campuses.

With three weeks until some districts go back to school, State Superintendent of Public Instruction Tony Thurmond said Wednesday he expected more districts to announce plans for distance learning, amid a surge of new cases in many parts of the state.

“In any place where there is uncertainty, we should proceed with caution. In many cases, that’s going to be opening in distance learning,” Thurmond said in a weekly media briefing held online.

However, there is no one-size-fits-all template for reopening schools, and classroom learning can still happen in counties or districts where it can be done safely, he said.

Many small, rural communities argue they shouldn’t have to comply with the same rules as big cities, where infection rates are higher, and Thurmond indicated Wednesday he agreed.

“We have some counties in this state where the number of cases is actually quite low,” he said. “Schools in those counties will actually be able to open and, if they’re following the guidance that our experts have provided — hand washing, 6 feet of spacing, maintaining physical distance and of course, everyone wearing a face covering — we believe that those schools can open safely.”

The Los Angeles and San Diego school districts, the two largest in California with a combined K-12 student population of about 720,000, announced Monday their school years will begin next month with distance learning. Thurmond applauded the large districts for “making the decision to say, ‘Lets open ‘safely.’ ”

San Francisco Unified School District Superintendent Vincent Matthews said in a statement Wednesday the district based its decision on guidance from health officials and with input from staff, students and families to start its fall semester Aug. 17 with distance learning.

The district hopes to phase in a hybrid approach for some of its 61,000 students “when science and data suggest it is safe to do so," he said.

Sacramento City Unified said in a statement it had hoped to offer its 46,000 K-12 students the option to choose between in-person and distance learning but shifted its plans to protect its students and staff, in consultation with the county's education and public health officials.

“While COVID-19 cases are spiking in California, a delayed time lag exists between testing and receiving test results, and widespread contact tracing remains inefficient," the statement said. Given these factors, “the district has determined that the semester will start with students participating in school remotely."