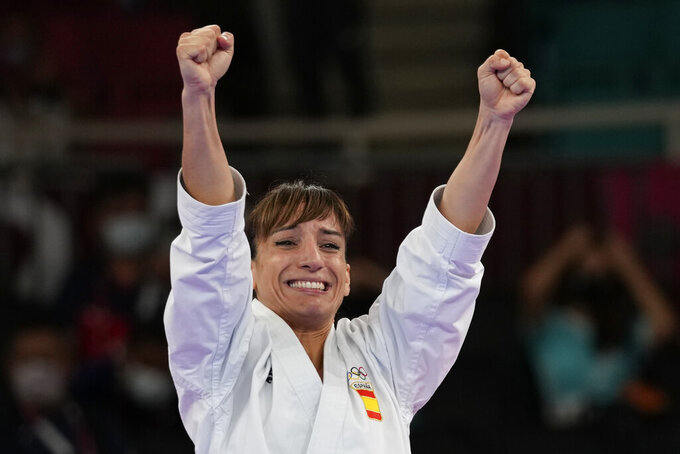 TOKYO (AP) — Sandra Sánchez was the perfect person to stand atop the medal podium at the Budokan triumphantly wearing the first Olympic gold medal in karate.

Just like karate itself, the 39-year-old Spanish champion waited many years for the opportunity to reach the highest level in sports — a platform to show off the mastery of her discipline to a worldwide audience. When she finally got her shot on the tatami in the inaugural Olympic karate events Thursday night, she didn't disappoint.

The passion of Sánchez's inspired kata performance won over the judges at the Budokan. She also hopes it captured the attention and the hearts of millions watching at home on television and getting their first taste of the competitive form of this famous martial art.

“It’s very special, because it’s the first time, and maybe the last time,” Sánchez said, noting her sport's temporary inclusion in the Games. “Also, the last year was very hard for a lot of people, which makes this Olympic Games very special.”

Along with Sánchez's title in kata — the demonstration of form often likened to a gymnastics floor exercise — karate also honored two more inaugural champions in kumite, or competitive sparring.

But the gold medals were just a decoration on a landmark day for a martial art that provides a framework for living to its most ardent followers.

“As a karate athlete, we’ve been doing this for the love of our sport and martial art,” said U.S. karateka Sakura Kokumai, who finished just outside of the medal places in women’s kata.

“I really hope people were able to see what we do as athletes,” Kokumai added. “We train very hard, just like any other athlete, and I believe we belong here in the Olympics. Unfortunately, as of right now this is a first and last, but hopefully we’ll be able to make a comeback in the next few Olympics coming up.”

Although Sánchez became the oldest Olympic champion in Spain's lengthy sporting history, she is still going strong toward karate's next horizons. She has given her adult life to the martial art, dominating competition in Europe since the middle of the past decade and becoming a national sports hero in Spain.

The day was even more special to Sánchez because she won gold on her fifth wedding anniversary. She is married to her longtime coach, Jesus Del Moral.

“This is my present,” she said to Del Moral with a laugh. “Now what is your present?”

She has persevered long past what would comprise most karatekas' competitive prime with help from Del Moral. After winning seven consecutive European titles in her discipline, she carried that form into Tokyo with a performance strong enough to hold off all of her younger competitors.

Although karate won't be on the Paris Olympic program, Sánchez is far from finished with her sport. Karate can be a lifetime commitment, and Sánchez sees many bright days ahead beyond this golden achievement.

“If I feel good, and my body and my mind go in the same way, I will play more,” she said. “When my body, when my mind say, ‘Stop,’ OK, then we stop and enjoy other things.”