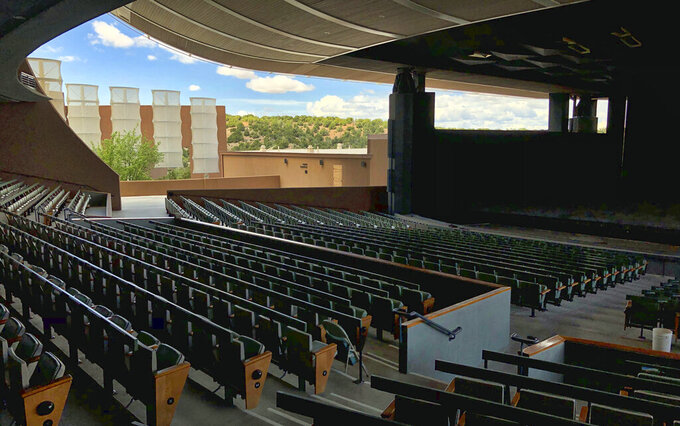 FILE - In this May 8, 2019, file photo, the Santa Fe Opera awaits its summer season in Santa Fe, N.M. The gates at the famed Santa Fe Opera are opening again. General Director Robert Meya said Wednesday, June 2, 2021, during a news conference that he and the entire company are excited to return to the stage next month. (AP Photo/Morgan Lee, File)

ALBUQUERQUE, N.M. (AP) — The gates at the famed Santa Fe Opera are open again, and General Director Robert Meya said Wednesday that he and the entire company are excited to return to the stage in July following nearly a year of planning and preparation amid the coronavirus pandemic.

Meya said during a virtual news conference that the company recently obtained approval from state officials to increase theater capacity and begin ticket sales on June 10. That means the open air venue will have about 1,000 additional seats for every performance this summer and for the first time will offer nightly simulcasting outside on giant video walls.

“While the past year has presented countless challenges, it has also pushed us to explore new avenues for bringing opera to our community,” Meya said.

That has included investments in the opera's audio and visual infrastructure for things like the simulcasting and other digital offerings, such as virtual backstage tours.

More than $5 million in tickets had been sold last year before the opera was forced to cancel the 2020 season due to the pandemic. Without a regular season, the opera was faced with a $10 million loss in revenue, leaving officials to stretch federal relief money and donations as far as they could go.

In a regular year, the opera’s operating budget is about $25 million, with 40% coming from ticket sales and donations making up another 40%.

Some patrons held on to their tickets for future years while others donated theirs back to the opera to help compensate seasonal staff. Sponsors also helped to match donations.

Meya did not address the opera's financial situation during the news conference, but acknowledged that the journey over the past year has been long.

“The fact that we will be on stage in a few weeks is a testament to the hard work, unfailing optimism and sheer faith of the hundreds of staff members — both year-round and seasonal — who call the Santa Fe Opera their home,” he said.

In recent years, the venue has been the backdrop for productions about the dawn of the nuclear age in 1940s New Mexico and a world premiere of a techno-infused opera about Apple co-founder Steve Jobs. Supreme Court Justice Ruth Bader Ginsberg, who died last fall, also used to be a regular visitor to performances in Santa Fe.

Among the new productions this season will be the world premiere of The Lord of Cries by John Corigliano and Mark Adamo. There also will be a special, one night-only concert featuring soprano Angel Blue in early August.

Among the health precautions this season, masks will be required for everyone visiting the opera.

As the opera prepares for a different kind of opening night, new Chief Artistic Officer David Lomelí said the industry also is navigating a new era that includes audiences in cyberspace. He believes the Santa Fe Opera can lead a think tank of creators who can tell stories relevant to the world today while still holding true to the traditions of the medium.

“We are experiencing a generational shift in our industry. The industry leaders of our companies are changing,” said Lomelí, a native of Mexico who recently joined the Santa Fe Opera. “An opera company today will need all the artistic firepower that they can summon in order to capture the minds of an audience that is already bombarded with myriad options for entertainment at the reach of their hands.”

Like its audience, Lomelí said he believes the industry itself also is moving toward more diversity among its artists.