Saratoga thoroughbred meet like no other opens with no fans 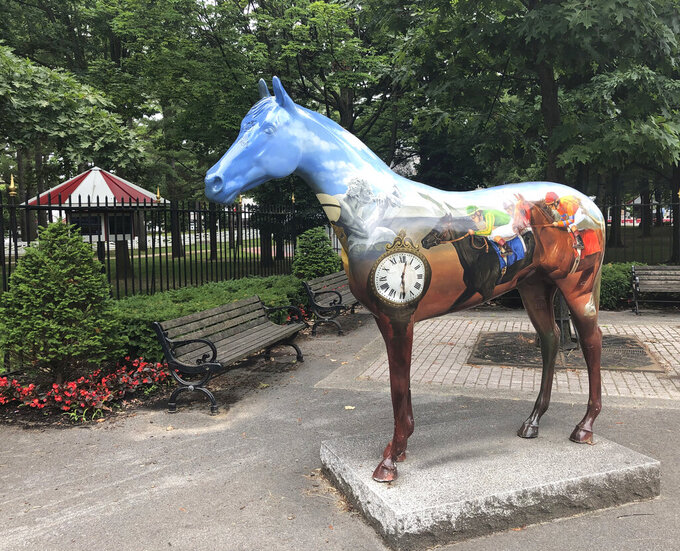 A horse sculpture stands outside the gate on the first day of horse racing at the Saratoga Race Course in Saratoga Springs, N.Y., Thursday, July 16, 2020. A Saratoga season like no other is underway, with fans barred from attending the start of the 152nd meet in track history and most likely the entire 40 days of racing. (AP Photo/John Kekis)

SARATOGA SPRINGS, N.Y. (AP) — A thoroughbred racing season like no other in Saratoga Race Course's long history began Thursday under a gray sky, with jockeys wearing masks, a smattering of fans trying to peer through fencing to at least get a glimpse of the horses, and management hopeful of something good in spite of the new coronavirus.

“In terms of getting everything ready and running the races it’s similar," said Dave O'Rourke, in his second year as president and CEO of the New York Racing Association. "In terms of people lining up outside the gates and getting ready for really what becomes a 40-day party here in terms of the racing world, it’s weird. But 2020 has been weird in a lot of different ways. So far, so good.”

Saratoga has 71 stakes races on the schedule worth $14.45 million, down from last year's totals of 76 and nearly $21 million in purses. That's a direct result of the impact of the pandemic.

“We’ve forecasted out the whole year," O'Rourke said. “We’re not going to make money this year, but the last few years we’ve done well, so we have reserves. The idea will be, can we bridge ourselves into 2021 and, are things normal and if not, how do we at least keep moving forward?

"You have to see daylight at some point. I’m hopeful. Everyone is.”

Saratoga, which has been running since 1863, is the crown jewel for NYRA and one of the most important meets in the nation. Last summer’s 40 days of racing set a record for all-sources betting handle at over $705 million, even though weather knocked out a full day of racing and half of another. The Spa also attracted over 1 million in paid attendance for the fifth straight year.

That impressive attendance streak is over. New York Gov. Andrew Cuomo and health officials decided in mid-May that racing could be held in the state but without spectators because of COVID-19. And although there's been talk that a small number of spectators might be allowed inside toward the end of the meet, that's probably not likely.

NYRA has closed the track to anyone not essential, jockeys are not allowed on the backstretch or the training track and have to meet their horses in the paddock before races. Protocols announced two days ago bar jockeys from racing elsewhere and any who choose to won’t be allowed back. Factor in that Del Mar in California canceled its weekend racing program on Wednesday after 14 jockeys tested positive for the coronavirus, and the trepidation is real.

Despite the attendance hit, NYRA is projecting a $650 million handle for the meet, a boon afforded by the increased use of mobile wagering.

“It's a trend that we identified strategically about two to three years ago,” O'Rourke said. "What we might have thought was going to occur in two, three, or four years is happening right now.”

“From a betting standpoint, we believe that we can maintain the same type of numbers that we had last year as long as the weather cooperates," added Tony Allevato, president of NYRA Bets. "The trends have been good from a wagering standpoint. With other sports coming back we are going to have some competition. We’re not going to be the only game in town. But from an online business standpoint, the hardest thing is to get the customer to come into your store. Once you have that customer in your store, it’s a lot easier to keep them engaged.”

Also aiding the bottom line is NYRA's “Saratoga Live” program, which will air daily television coverage of the meet — over 210 hours in all — on FOX Sports and MSG Networks.

“I’m not sure exactly where we’d be if we didn’t have that relationship," Allevato said. "They’ve stepped up and given us a lot of hours.”

Racing will be held Wednesdays through Sundays through Labor Day and the highlight of the meet, as always, is the $1 million Travers Stakes on Aug. 8.

NYRA has erected temporary privacy curtains to block the view through the chain-link fences along two avenues that border the oldest racetrack in the nation. The goal is to prevent the general public from gathering. That didn't stop the diehards on this day as a group of fans, a couple on short stools, lined the fence along Union Avenue.

“It's my 48th consecutive opening day, so now I've got to put an asterisk next to it,” said Joe Labunski, a retiree from nearly Stillwater. “I just had to come.”

“I want to be able to say I seen at least one race at Saratoga this year,” Carr said right before the horses in the first race sped by. “I couldn't tell you how disappointed I am. I'm not a happy camper.”