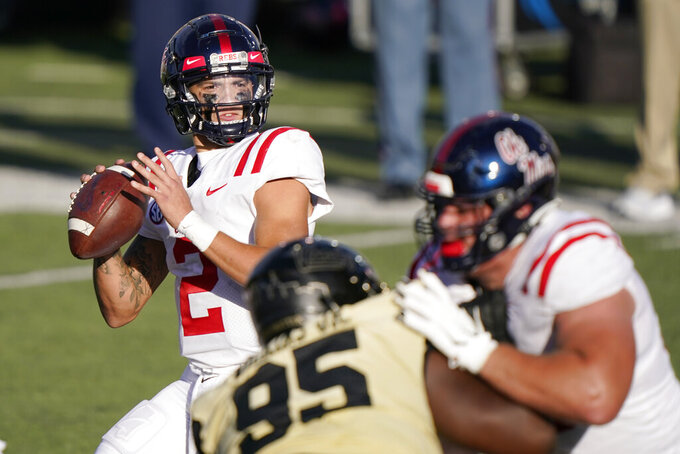 Mississippi quarterback Matt Corral (2) drops back to pass against Vanderbilt in the first half of an NCAA college football game Saturday, Oct. 31, 2020, in Nashville, Tenn. (AP Photo/Mark Humphrey)

—DJ Uiagalelei, Clemson, threw for 342 yards and two TDs in relief of Trevor Lawrence, home with COVID-19, and the top-ranked Tigers rallied from 18 points down in the first half to beat Boston College 34-28.

—DeVonta Smith, Alabama, had four TDs and 203 yards receiving in the No. 2 Crimson Tide's 41-0 victory over Mississippi State.

—Matt Corral, Mississippi, passed for 412 yards and six TDs in a 54-21 win over Vanderbilt.

—Breece Hall, Iowa State, matched a career high with 185 yards rushing and two TDs as the No. 23 Cyclones coasted to a 52-22 victory over winless Kansas.

—Nick Starkel, San Jose State, threw for 467 yards and a career-high five TDs to help the Spartans beat New Mexico 38-21 and open the season with back-to-back wins for the first time 33 years.

—Justin Fields, Ohio State, passed for 318 yards and four TDs to help the No. 3 Buckeyes beat No. 18 Penn State 38-25 on an eerily quiet night at one what is usually one of the most raucous settings in college football.

—Grayson McCall, Coastal Carolina, passed for 254 yards and four TDs as the No. 20 Chanticleers cruised to a 51-0 victory over Georgia State.

—Michael Penix Jr., Indiana, threw three TD passes and ran for another score as the No. 17 Hoosiers beat mistake-prone Rutgers 37-21.

—Taulia Tagovailoa, Maryland, threw for 394 yards and three touchdowns and scored on a late 2-yard run to help the Terps rally from a 17-point deifict in the fourth quarter to beat Minnesota 45-44.

—Jack Sears, Boise State, threw three TD passes and ran for another score while filling in for starter Hank Bachmeier to help the No. 25 Broncos beat Air Force 49-30.

Outside of Michigan State’s football program, few expected the Spartans to beat No. 13 Michigan.

The people who mattered, though, had all the confidence they needed to pull off the upset.

Rocky Lombardi threw for 323 yards, including 196 to Ricky White, and three touchdowns to help Michigan State stun the Wolverines 27-24.

The Spartans appeared to be the better team all afternoon on both sides of the ball in Mel Tucker’s debut as coach in the rivalry.

Tucker became just the second coach to beat Michigan in his first attempt with the Spartans, joining Alabama coach Nick Saban, who did it in 1995. The former Colorado coach started his career as a graduate assistant for Saban at Michigan State in 1997.

Freshman DJ Uiagalelei already made Clemson history by leading the biggest comeback in the history of Death Valley. He’ll get the chance to make even more next week with Trevor Lawrence ruled out for the showdown with No 4 Notre Dame due to COVID-19.

Uiagalelei stepped in for Lawrence and rallied the top-ranked Tigers to a 34-28 victory over Boston College after they fell behind by 18 points.

Rattled at facing the Fighting Irish? The kid from California sure doesn’t sound like it.

Smooth and calm, Uiagalelei looked ready-made for any challenge after leading Clemson back from 28-10 deficit, a rally that surpassed a 17-point come back from 35-18 down at home in a win over Virginia in 1966.

10_Straight Big Ten road wins against ranked opponents by No. 3 Ohio State following a 38-25 win over No. 18 Penn State.

166_Straight passes by UCF's Dillon Gabriel without an interception.