Saudi Aramco Q1 profits of $16B as virus impacts earnings 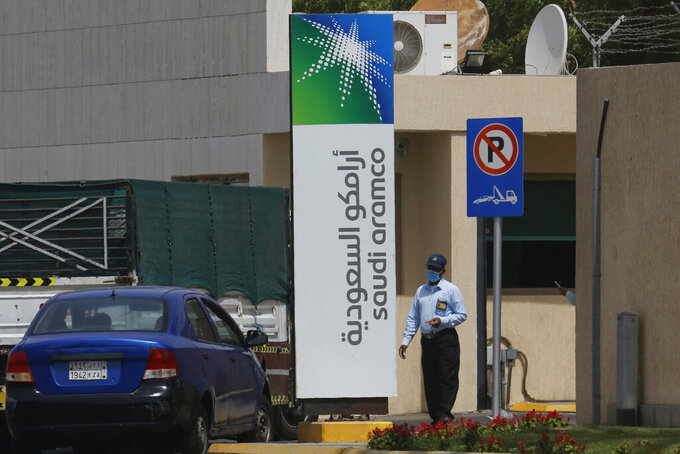 DUBAI, United Arab Emirates (AP) — Saudi Aramco, the kingdom's energy producer, announced on Tuesday a net income of $16.7 billion for the first three months of the year and dividends of $18.75 billion for shareholders.

Despite posting the highest quarter dividends in 2020 of any listed company, its profits were 25% down, compared to the same time last year when earnings topped $22 billion.

Aramco President and CEO Amin Nasser said the company expects the impact of the coronavirus pandemic on global energy demand and oil prices to weigh on earnings for the continuation of the year.

The government of Saudi Arabia, which majority owns Aramco, had earlier said state oil revenues were down by nearly a quarter in the first three months of 2020 compared to the same time last year.

Just Sunday, the Saudi Energy Ministry directed Aramco to deepen production cuts and limit output to 7.5 million barrels per day in June. This comes as storage for crude nears max capacity due to lower demand for oil globally.

The oil and gas company is nearly entirely owned by the Saudi state, with just under 7% of the company listed on the local Saudi Tadawul exchange. Shortly after listing in mid-December, Aramco's market capitalization reached beyond $2 trillion, making it comfortably the world’s most valuable company. Company shares have traded down since then.

The company's financial details were long a closely-held secret until Aramco began preparations for the sale of a portion of its shares last year.

Aramco said its net earnings for the first quarter of 2020 demonstrate the company's “financial and operational strength despite a challenging” environment and lower demand for oil globally caused by the pandemic. It had paid dividends of $13.4 billion for last year’s fourth quarter.

“The COVID-19 crisis is unlike anything the world has experienced in recent history and we are adapting to a highly complex and rapidly changing business environment," Nasser said.

He added that longer term, Aramco is “confident that demand for energy will rebound as global economies recover."