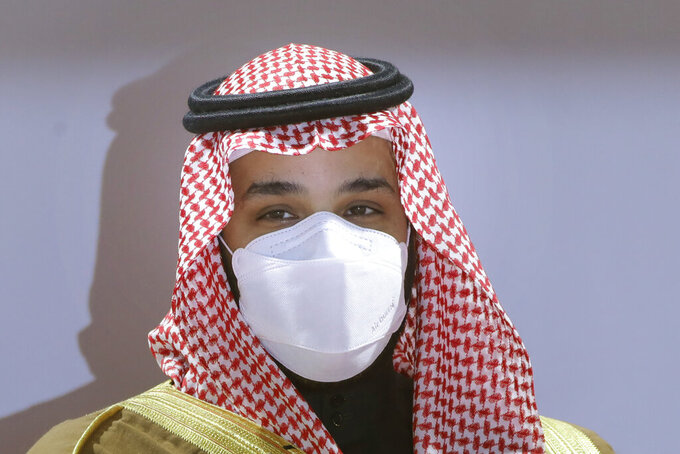 FILE - In this Feb. 20, 2021, file photo, Saudi Crown Prince Mohammed bin Salman wears a face mask to help curb the spread of the coronavirus as he attends the Saudi Cup award ceremony during the final race of the $20 million, the Saudi Cup, at King Abdul Aziz race track in Riyadh, Saudi Arabia. The crown prince laid out a vigorous defense of his domestic policies and the thinking behind his push to transform Saudi Arabia economically and socially during a wide-ranging interview broadcast across Saudi television channels late Tuesday, April 27, 2021. (AP Photo/Amr Nabil, File)

DUBAI, United Arab Emirates (AP) — Crown Prince Mohammed bin Salman laid out a vigorous defense of his domestic policies and the thinking behind his push to transform Saudi Arabia economically and socially during a wide-ranging interview broadcast across Saudi television channels late Tuesday.

In the lengthy interview that stretched past midnight, the crown prince also expressed hopes for good relations with rival Iran and said that Saudi Arabia and the Biden administration in Washington were in agreement on most issues of mutual concern.

The bulk of the interview, though, was spent laying out a dizzying array of economic figures and milestones to explain why the government has raised taxes, cut subsidies and embarked on unpopular austerity measures to hit targets in the so-called Vision 2030 plan.

He said the kingdom is in talks to sell a 1% stake of the state-owned oil giant Aramco to a leading global energy company. In 2019, the kingdom listed 5% of Aramco on the Saudi stock exchange in an effort to raise money for its sovereign wealth fund.

The interview was timed to mark five years since the launch of Vision 2030, Prince Mohammed's blueprint for transforming the kingdom from an oil-dependent, insular nation to an economic powerhouse that is open to the world. In his unveiling of the project in 2016, he acknowledged Saudi Arabia had an “addiction to oil.”

One of the most important goals of Prince Mohammed as he prepares to one day inherit the throne from his 82-year-old father, King Salman, is to create millions of jobs for young Saudis entering the workforce. He aims to lower unemployment to 7% by 2030. The kingdom's unemployment shot to a high of 15.9% in mid-2020 before going back down to around 12%.

To boost government revenue last year and help offset the double shock of the coronavirus pandemic and downward slide in oil prices, the government tripled taxes on goods and services to 15%, which led to a rise in inflation and grumblings on social media.

The crown prince described the tax rate as a “temporary decision” that could last from one to five years and then be lowered to between 5% and 10%. He said difficult decisions had to be made “to avoid catastrophe and create opportunities.”

On relations with Washington, the prince said Saudi Arabia and the Biden administration agree on 90% of issues of mutual concern, but are in disagreement on the rest, though he did not elaborate.

He said the world is “a wide place” with many nations to build strategic ties with.

“We do not accept any external pressure or interference in our internal affairs," Prince Mohammed said.

President Joe Biden's administration has made clear it is recalibrating the U.S. relationship with Saudi Arabia following four years of warm times with the Trump administration. Among Biden's first decisions was ordering an end to U.S. support for the Saudi-led war in Yemen.

The interview aired on the same day that an explosives-laden boat targeted the Saudi port of Yanbu. Yemen’s Houthi rebels, who are backed by Iran, have claimed responsibility for past attacks on Saudi oil targets.

“We want good relations with Iran,” Prince Mohammed said of the kingdom's top rival. Problems with Iran stem from its “negative actions,” such as its nuclear program, interference in regional conflicts and ballistic missile program, he said.

The crown prince's comments on Iran were more measured than in previous years when Donald Trump was in office. Iran is currently negotiating with world powers on how it and Washington can return to the 2015 nuclear deal that the Trump administration pulled the U.S. from.

Although the prince's international reputation remains damaged by the 2018 killing of Saudi columnist Jamal Khashoggi inside the kingdom’s consulate in Istanbul, he is popular among many Saudis for his bold social reforms.

With backing by his father, the prince has lifted the ban on women driving, curbed restrictive male guardianship laws, opened the country to cinemas and concerts, and issued directives that have dramatically dropped the kingdom's rate of executions.

“Today we cannot advance... with the presence of extremist thought in the kingdom,” he said, adding that it would hamper economic growth and development. He cautioned that any Saudi with extremist views, even if that person hasn't yet committed a crime, "is a criminal.”

He attempted to put distance between the kingdom and the teachings of the late Sheikh Mohammed Ibn Abdul-Wahhab, whose ultraconservative teachings are known as “Wahhabism” and associated with some of the most extreme interpretations of Islam. The prince said there is no single person nor school of thought in the kingdom that Islam should be confined to.

With the interview targeting Saudi viewers during the holy month of Ramadan, he said no longer should punishment and laws be based on narrow, outdated 100-year-old clerical interpretations of the Quran.

“Our constitution is the Quran. It has been, it is and will continue to be,” the crown prince said, stressing that religious moderation is key.