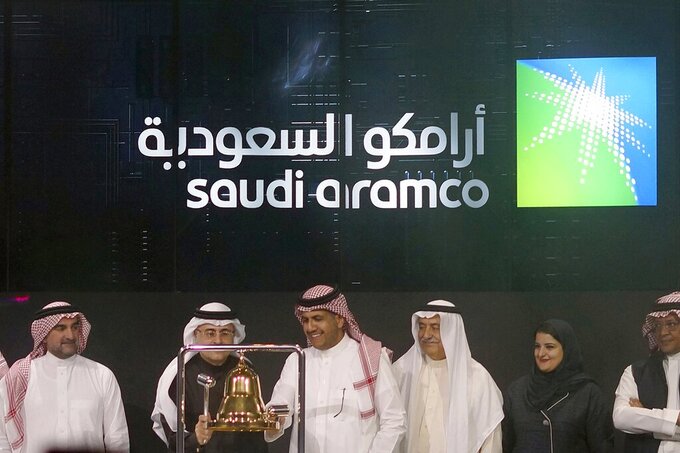 FILE - In this Dec. 11, 2019, file photo, Saudi Arabia's state-owned oil company Aramco and stock market officials celebrate the debut of Aramco's initial public offering on the Riyadh Stock Market, in Riyadh, Saudi Arabia. Aramco paid the Saudi government 30% less in taxes in 2020, the company reported Monday, March 22, 2021, as the region’s largest economy grapples with the pressures of the coronavirus pandemic and low oil prices. Despite Aramco’s steep losses, the company managed to keep its dividend pledge to shareholders by taking on a ballooning amount of debt. (AP Photo/Amr Nabil, File)

Saudi Arabian Oil Co, the kingdom’s largest taxpayer, transferred $110 billion to the government in 2020 in dividends, royalties and income taxes, down from nearly $159 billion the year before. The kingdom plans to spend $263 billion in 2021, according to its budget, showing the significance of Aramco's payments to state coffers.

The state-controlled company’s public figures offer key insight into the financial health of the kingdom. Even as Saudi Crown Prince Mohammed bin Salman’s aggressively pushes to diversify the economy away from oil, Saudi Arabia relies on the energy sector for 80% of its exports and two-thirds of its financial revenues.

Despite its steep 2020 losses, Aramco stuck to its promise to pay $75 billion in dividends to shareholders for the year, unlike other major oil companies that cut payouts to preserve cash flow. Nearly all of the dividend money goes to the Saudi government, which owns more than 98% of the company. Seeking a cash infusion, the company has taken on a ballooning amount of debt, its financial report shows. Aramco’s net debt to equity ratio more than doubled — from 26% in 2019 to 55% in 2020.

In a call with financial analysts on Monday, President and CEO Amin H. Nasser said he expected oil prices to roar back in the second half of the year, noting the “strong pickup in demand” already sweeping China and East Asia.

Buoyed by optimism about COVID-19 vaccines and a return to global trade and travel, the price of oil started to claw its way back to over $60 a barrel last month, with Brent trading at over $64 on Monday. Crude prices even briefly climbed above $70 earlier this month, following a drone attack on Aramco's largest export facility, Ras Tanura, the latest in a series of assaults on the company's facilities claimed by Yemen's Houthi rebels.

In recent months, even as prices rebounded, Aramco has tightly restrained production under a continuing agreement with other members of the OPEC cartel and its allies, known as OPEC+. The cuts have supported energy markets as vaccination campaigns sputter and the virus still races around the world.

That may change in the coming year, however.

“Aramco is in a unique position to surge production should the global oil demand recovery accelerate,” Bank of America said. “A potential significant upside to production could follow in 2022” after the expiration of the OPEC+ agreement, it added.

Aramco was listed on the local Tadawul exchange in 2019 in the largest valuation for an initial public offering. It traded at 35.55 riyal ($9.48) a share on Monday.

The kingdom’s fiscal deficit hit $79 billion in 2020, or 12% of gross domestic product, far surpassing previous estimates. The budget deficit has widened each year since oil prices dropped in 2014, prompting the government to borrow heavily and accelerate its shift away from oil largess. In response, the government has cut back some subsidies, tripled the value-added tax to 15% and accelerated its search for non-oil revenue.