Saudis put World Cup every 2 years back on FIFA's agenda 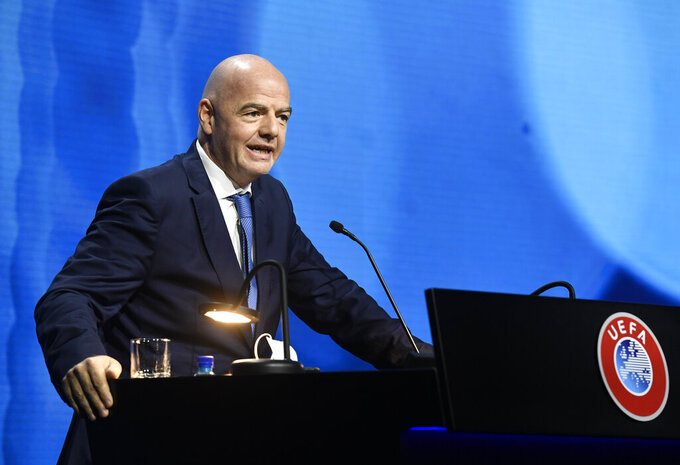 FIFA President Gianni Infantino speaks during the 45th UEFA Congress in Montreux, Switzerland, Tuesday April 20, 2021. In a speech that seemed to blame the club owners and absolve players, FIFA president Gianni Infantino said he can only "strongly disapprove" of the Super League. "If some elect to go their own way, then they must live with the consequences of their choice," Infantino said. "They are responsible for their choice." (Richard Juilliart/UEFA via AP)

GENEVA (AP) — Playing the World Cup every two years instead of four is back on soccer’s agenda.

The proposal “requesting a feasibility study to be carried out on the impact” of playing both tournaments every two years will be put to the FIFA annual meeting of 211 member federations. The congress is being held as a remote meeting on Friday.

A biennial men’s World Cup was floated by FIFA’s then-president Sepp Blatter more than 20 years ago.

The idea now returns near the end of the busiest and most congested season in modern soccer.

In Europe, the same number of competitions and games for club and national teams were played despite several weeks being lost because the previous pandemic-delayed season pushed back the start to September.

Still, the proposal is attractive to FIFA whose president Gianni Infantino has built a close relationship with Saudi Arabia since his election in 2016.

Creating new and bigger competitions is a key theme of Infantino’s presidency, though the global players' union FIFPRO warns of players facing burnout and injuries from bigger workloads.

The first year of Infantino’s presidency saw FIFA add 16 more teams and 16 more games to the World Cup for the 2026 edition. The 48-team, 80-game tournament will be hosted in the United States, Canada and Mexico and should set attendance and revenue records.

FIFA was to launch a 24-team Club World Cup tournament in China this year. European soccer officials at first opposed the project, citing Infantino's lack of transparency about the financial backers.

The inaugural tournament was shelved last year when the coronavirus pandemic forced the European Championship and Copa America to be postponed to 2021.

The biennial World Cup idea was revived in 2018 by South American soccer leader Alejandro Dominguez, a FIFA vice president who was then a close ally of Infantino.

Dominguez and the South American soccer body CONMEBOL have since moved closer to officials at UEFA, whose quadrennial European Championship would likely be threatened by playing twice as many World Cups.

Currently, each World Cup earns FIFA up to $6 billion in broadcasting and commercial deals. The Euro 2016 tournament — which had 51 games compared to 64 in the 32-team World Cup format — earned UEFA around $2.3 billion.

The idea that both the men’s World Cup and Euros could be staged every two years was raised in March by coaching great Arsene Wenger, who is now FIFA's head of global development.

Both Wenger and Dominguez used the argument that players deserve more chances to play in World Cups.

Lionel Messi and Cristiano Ronaldo both aim to play in their fifth World Cup in Qatar next year.

Infantino has consistently said a Women’s World Cup could be held every two years. The next edition in 2023 will be hosted by Australia and New Zealand.

A separate proposal to Friday’s FIFA meeting from Jamaica calls for “a global women’s football competition concept to be prepared.”