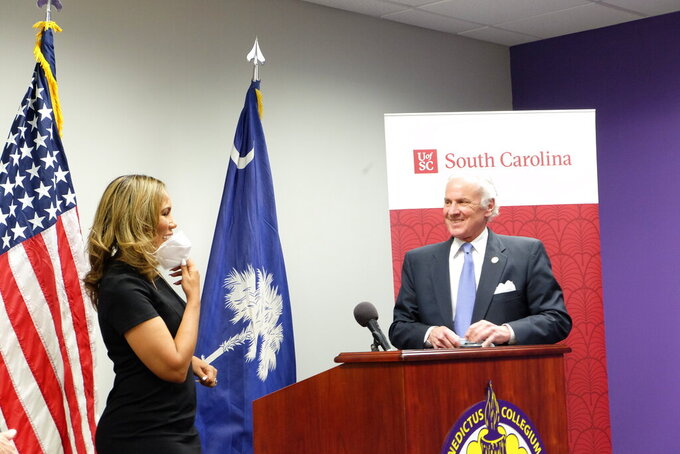 Schoolchildren, teachers and others in need of computer access will soon be able to use Apple computers at eight sites across the state, McMaster announced in a news conference at Benedict College, a historically Black liberal arts school in the state’s capital city.

“The pandemic has made it abundantly clear that internet access is not a luxury but a necessity for millions of South Carolinians,” McMaster said in a statement. “The strategic placement of these labs will bolster South Carolina’s premier workforce training efforts by giving our communities and people access to resources they need to expand participation in our state’s growing economy.”

The announcement comes as officials push to expand broadband access across the state. Hundreds of thousands of people in the state’s rural areas have struggled to get online, a problem underscored after the coronavirus pandemic pushed many functions of life onto the internet.

The eight computer labs will be strategically located so local school districts, historically Black colleges and universities, and technical colleges can use them, officials said. Two hubs will be centered in Columbia's Bull Street District and at Benedict College, with some others located at University of South Carolina campuses.

“That wi-fi network will touch the communities in and around these laboratories in meaningful ways,” said Benedict College President Roslyn Clark Artis.

Tuesday's announcement leaves about $22 million of the $48 million in pandemic relief funds McMaster received from the federal government last year to spend on education. McMaster didn't say what else he plans to allocate the funds to. He has until a May deadline to spend the rest of the cash.

McMaster has previously said that $20 million of the money would go to early childhood education, job training and tutors for foster children.

The governor's initial plan announced last summer was to spend most of the money on grants of up to $6,500 to help parents send children to private or religious schools, which were providing in-school instruction when most schools statewide were still having virtual classes at least parttime.

But the state Supreme Court ruled in October that McMaster’s plans broke the state constitution by sending public money to private schools. The decision also put on hold $2.4 million set aside by the governor for technology improvements to historically Black universities and colleges.

Supporters of McMaster’s plans said more than 15,000 families expressed interest in grants. Opponents said the governor was using the pandemic to push school vouchers, which the Legislature has been unable to get full support for in more than a decade.

In January, McMaster laid out plans to re-direct $20 million of the $48 million. That included $8 million for South Carolina technical colleges to allow 3,100 people who lost jobs in the pandemic to take classes for free for jobs in health care like certified nursing assistants or in manufacturing, criminal justice or computers.

McMaster also set aside $7 million to expand full-day pre-kindergarten for 4-year-olds. The program is free for families whose children are on Medicaid or make just under double the federal poverty level.

The South Carolina Department of Social Services was set to receive another $4.9 million to improve education in 74 group homes and for about 600 children living with foster families.