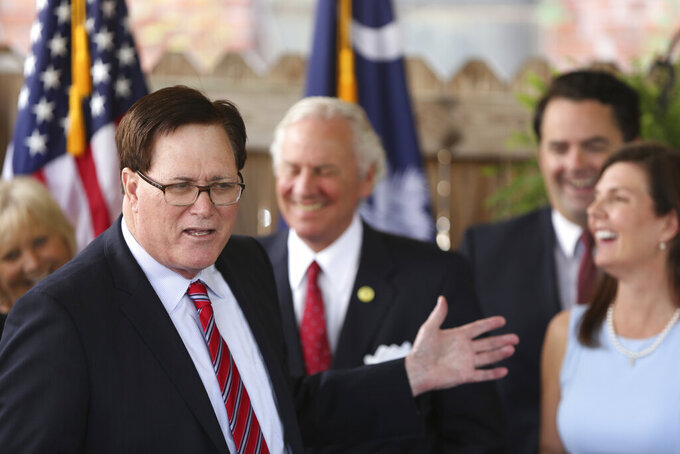 WEST COLUMBIA, S.C. (AP) — Gov. Henry McMaster again said South Carolina is recovering better from the COVID-19 pandemic than just about any other state as he held a ceremonial signing Thursday of a bill preventing people from suing companies over the virus

McMaster headed less than 2 miles (3 kilometers) from his Statehouse office to Café Strudel in West Columbia, whose owner praised him and the Legislature for taking steps to reduce his risk from reopening after the worst of the pandemic.

“As a result a lot of other states are struggling to get out of the holes they were in. We’re ready to blast off," McMaster said Thursday before signing the bill.

The May unemployment rate in the state was 4.6% in May, down from the pandemic high of 11.5% in May 2020 and well below the national rate of 5.8% in May 2021, according to the South Carolina Department of Employment and Workforce.

COVID-19 has killed more than 9,800 people in South Carolina since March 2020. Only about 37% of the population has been fully vaccinated against the disease.

After the bill signing, McMaster said he wasn't worried about the low vaccine rates or new COVID-19 variants that have caused increased case counts and hospitalizations in other states.

"We’re always on alert. We watch it very closely and we’re ready to respond as necessary," the governor said.

McMaster made the COVID-19 liability bill a priority. He actually signed the bill on April 28 after it passed the House 89-18 and the Senate 40-3.

Opponents of the bill said existing laws would work protect the businesses without changes and as of this spring there was just one lawsuit pending in state court where someone blames a business for their illness.

The bill offers certainty to businesses that if they do the right thing, they will be protected, House Speaker Jay Lucas said.

“We're not rewarding poor behavior with a bill like this. This isn't a get out of jail free card," said Lucas, a Republican from Hartsville.