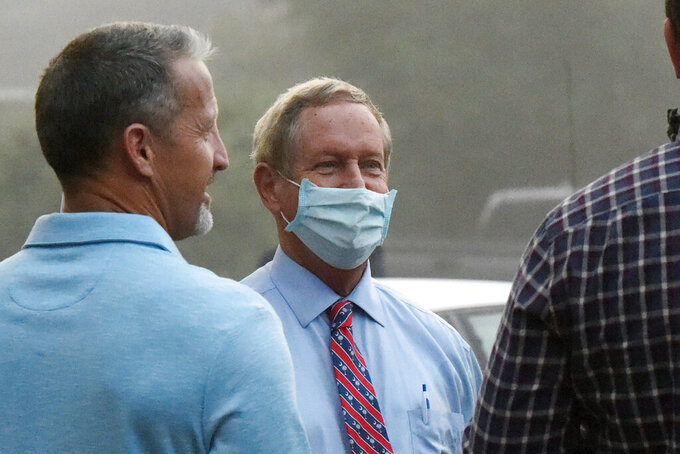 COLUMBIA, S.C. (AP) — South Carolina's $175 million U.S. Senate race has received much of the attention this election cycle, but every incumbent in the state trying to return to Congress has a major party challenger in 2020.

The most expensive and most watched U.S. House race involves Democrat U.S. Rep. Joe Cunningham, trying to win a second term after his upset of the century wining the seat anchored by Charleston and Hilton Head Island two years ago. His Republican opponent is state Rep. Nancy Mace.

But each of South Carolina's seven U.S. House districts has a Republican taking on a Democrat.

South Carolina voters have taken advantage of no-excuse absentee voting approved by the Legislature because of the COVID-19 pandemic. As of the end of the day Friday, more than 1.2 million votes had already been cast, either in person or by mail, according to the state Election Commission. In the last presidential election in 2016, 2.1 million ballots were cast in the state.

Republican U.S. Rep. Joe Wilson finds himself in a tough fight as he seeks a 10th term.

Boroughs raised more than $2 million, while Wilson raised about $1.5 million. She was born in tiny Williston in Barnwell County and called herself a “daughter of the district”

“We need someone who shows up and handles these problems every single day, not once a decade when they finally have a competitive race," Boroughs said.

The district stretching from the suburbs of Columbia through staunchly Republican Lexington County and into Aiken is one of the state’s most conservative. A Democrat hasn’t won there since 1964.

Also running are Sonny Narang for the Alliance Party and Kathleen Wright for the Constitution Party.

Republican U.S. Rep. Jeff Duncan faces a familiar opponent as he runs for a sixth term.

The two ran against each other in 2016, with Duncan receiving 73% of the vote in a congressional district that covers 11 counties in the northwest part of South Carolina west of Greenville and north of Aiken.

Duncan has raised almost $1.4 million for his reelection campaign. Cleveland raised about $23,000.

Republican U.S. Rep. William Timmons is trying to win reelection after making his way to Washington in 2018 from the South Carolina Senate.

Timmons faces Democrat Kim Nelson, a political newcomer, in the district that includes Greenville and Spartanburg.

Republican U.S. Rep. Ralph Norman faces a former wide receiver for the University of South Carolina as he seeks a second full term.

Brown is touting his days working in the state Commerce Department under former Republican Gov. Nikki Haley. Meanwhile, Norman had Haley in person kicking off his reelection campaign earlier this year.

Clyburn’s most visible decision in 2020 was strongly and visibly throwing his support behind Democratic presidential nominee Joe Biden at a moment when the former U.S. senator was vulnerable, helping him to a resounding victory in the South Carolina primary and the party’s nomination.

The congressional district connects parts of Columbia with parts of Charleston and was drawn to ensure it had a majority of minority voters. Clyburn is the only representative the district has had since it was drawn in the early 1990s.

McCollum said he is a Navy veteran and tech company employee. He did not raise enough by the end of October to need to file a federal campaign report. Clyburn raised $3.2 million.

Mark Hackett of the Constitution Party also is running for the seat.

Republican U.S. Rep. Tom Rice is trying to remain the only congressman his district has ever had.

Rice is seeking a fifth term against Democrat Melissa Watson in the district that stretches from Darlington to Florence to Myrtle Beach. It was drawn in 2012 when South Carolina gained enough population to get a new district. Rice has won every race.

Democrats are pushing hard to flip four Republican-held Senate seats in the Charleston area. If they won them all without losing any seats, the 27-19 Republican majority would vanish to a 23-23 tie.

But Republicans are pushing to flip Democrats from several seats in the Upstate, which voted for Republican President Donald Trump in 2016.

Just under half of the 124 South Carolina House races have opponents from both major parties. Republicans hold 78 seats, a majority that should remain safe no matter Tuesday's results.