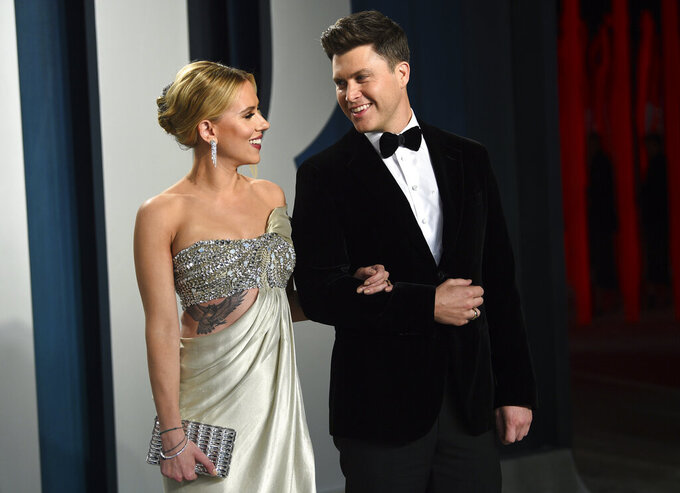 FILE - In this Feb. 9, 2020 file photo, Scarlett Johansson, left, and Colin Jost arrive at the Vanity Fair Oscar Party in Beverly Hills, Calif. Meals on Wheels America announced Thursday on Instagram that Johansson and Jost married over the weekend in an intimate ceremony. (Photo by Evan Agostini/Invision/AP, FIle)

LOS ANGELES (AP) — Scarlett Johansson and Colin Jost have tied the knot a year after engagement.

Meals on Wheels America announced Thursday on Instagram that Johansson and Jost married over the weekend in an intimate ceremony. The post said the couple’s wedding followed the COVID-19 safety precautions as “directed by the CDC.”

The actress and “Saturday Night Live” star got engaged in 2019 after dating two years.

Johansson, 34, was previously married to actor Ryan Reynolds and journalist Romain Dauriac. She and Dauriac share a daughter named Rose, who was born in 2014.

This is the first marriage for the 38-year-old Jost, who is the co-anchor of “SNL's” Weekend Update. Jost performed on the most recent episode, which was hosted by Adele.